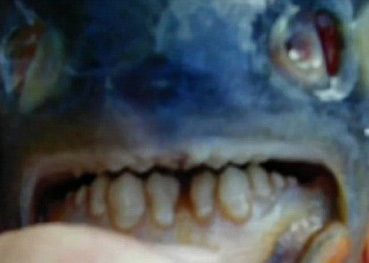 According to a local TV station, there’s an exotic fish trespassing in a midwestern lake. It has teeth that look like a human’s and is primarily vegetarian according to experts. However, this beauty has an ugly history back in Papua New Guinea when it goes, um, gourmet. As reported in the Daily Mail:

A popular Illinois lake is on guard after the discovery in its waters of the exotic pacu fish—infamous for killing men by ripping off their testicles.

Families reported being wary of entering the waters of Lake Lou Yaeger after hearing that a pacu was caught by a fisherman on June 7 and that another one had been spotted two weeks later.

Known in Papua New Guinea as “The Ball Cutter,” the pacu has reportedly been responsible for the deaths of two fishermen in the Pacific nation, who died from blood loss after the fish had bitten off their testicles.