Cooking the Books: Asking for Truffle by Dorothy St. James 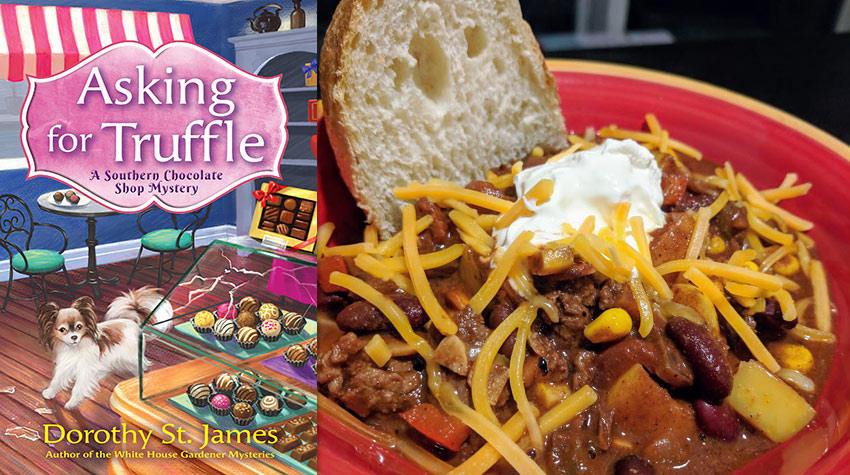 Charity Penn is not your usual cozy mystery heroine. As an heiress of somewhat dubious parentage, her entire life before the novel’s open is primarily one of distrusting others, from the family that keeps her at arms’ length to the many people willing to lie to her to gain access to her fortune or otherwise enrich themselves at her expense.

Of the few people she isn’t automatically prickly and defensive around, she has her half-sister, Tina, and her primary maternal figure, Granny Mae, the personal assistant who persuaded Penn’s actual grandmother all those years ago to raise her instead of denying any relationship with the newborn foundling and dropping her off at an orphanage. She also has Skinny McGee, a close friend from her tough teenage days, who is the person she turns to when she receives a letter announcing that she’s won a trip to Camellia Beach, South Carolina, for cooking lessons.

Given her background, Penn would be suspicious even if she weren’t a terrible cook with little interest in improving her skills. Since Skinny is heading to South Carolina for a surfing competition anyway, he promises not only to use his computer skills to look into the matter but also to swing by Camellia Beach to do some snooping around. Two weeks later, he leaves a voicemail for Penn telling her that she needs to come down to South Carolina to see for herself what he’s discovered.

Penn’s return calls and texts go unanswered, and a newspaper headline soon tells her why. “Man Murdered in Vat of Chocolate,” it reads. When Penn realizes that Skinny was murdered in the very shop she’d been invited down to, she decides that she has to go, not only to fulfill one of his last requests but also to investigate his murder.

Once she arrives, she discovers—to her frustration—that the local police chief thinks that Skinny was the victim of a drug deal gone awry. As she investigates both the murder and the letter that she’s convinced must be part of some sort of scam, she finds herself in peril not only of losing her life but, for her, the possibly worse fate of also losing her carefully built defenses to the quirky, lovely people of Camellia Beach.

I started reading the Southern Chocolate Shop Mystery series with the third book, In Cold Chocolate, which immediately had me hooked on Penn and her struggles to establish her identity amidst all the family drama and murder. It’s so rare to meet a heroine who is so obviously yet understandably flawed. This first book in the series establishes this in vivid detail, with every one of Penn’s shortcomings as an (amateur) investigator realistically accounted for. I loved so much that her motivations were clear and beautifully written throughout, and I can’t wait to dive into the next book in the series!

Asking for Truffle also included three recipes. While I was very tempted to try out one of the sweet chocolate treats, I kept to our tradition of alternating the sweet with the savory and chose this recipe instead: 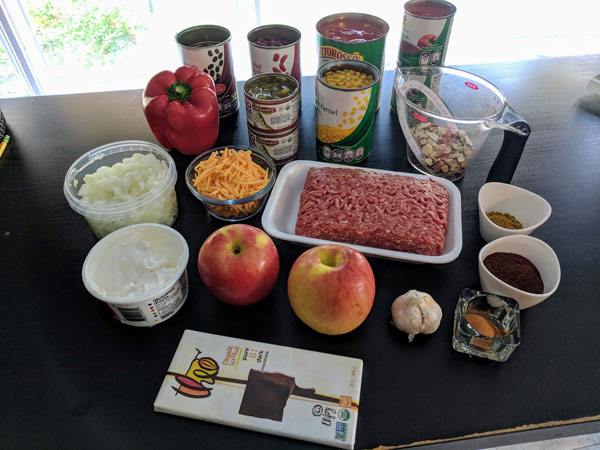 In a large skillet, cook beef, onions, and garlic until meat is brown. Drain off fat.

Add slivered almonds. Reduce heat to low and cook until thick (about 2 hours). 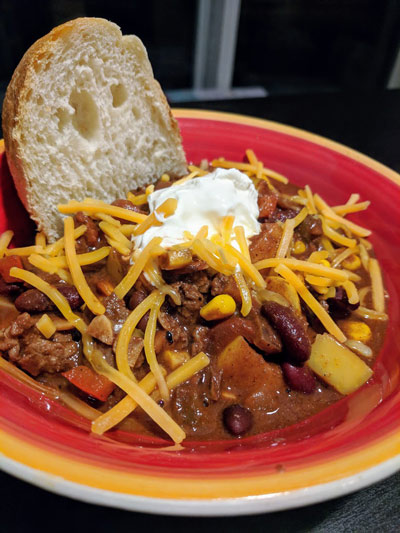 It is definitely chili weather where I am in Maryland! I really enjoyed what the chocolate and apples brought to this dish, though I must admit I prefer a soupier chili without beans. I also wish the recipe was a little clearer on whether I should cover the crockpot while cooking or otherwise. I wound up covering it both when on high and on low, as it was taking forever to bubble on the former, and I wasn’t confident it would maintain its heat otherwise while on the latter. I also took the liberty of adding a generous serving of garlic salt as this dish is quite bland otherwise. I’d probably also skip the almonds next time, though I’ll definitely be adding chocolate to my next batch of chili. It really added a satisfying undertone that hinted at a mole sauce.

We stay in Camellia Beach next week to try our hand at making bonbons and solving another murder with Penn. Do join me!