Cooking the Books: In Cold Chocolate by Dorothy St. James 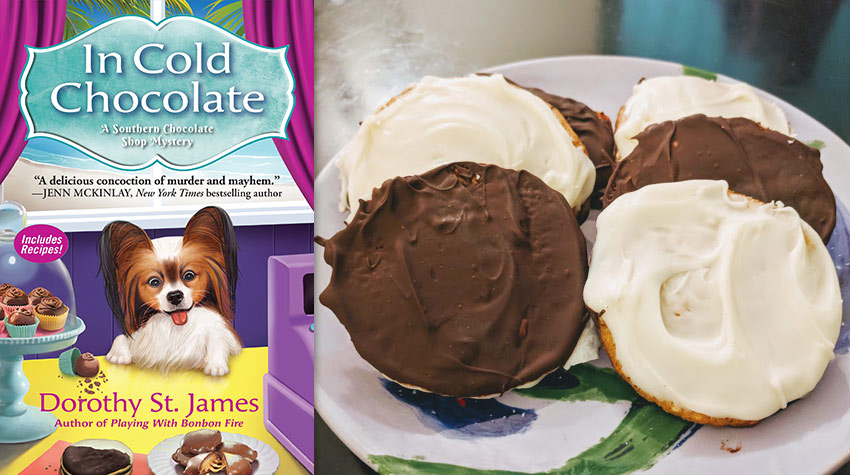 I’m kind of sorry I started the Southern Chocolate Shop Mystery series with this third installment because it’s so awesome that I wish I’d jumped in from the start! Charity Penn—or Penn, as she’s better known—is the owner of The Chocolate Box, a specialty chocolate store located in the quiet island town of Camellia Beach, South Carolina. She recently inherited the store under somewhat murky circumstances.

Abandoned as a baby on the Illinois doorstep of her young and completely unprepared father, she was raised by her awful grandmother, Cristobel Penn, to believe that her mother had been an older con-woman who had taken advantage of Penn’s hapless dad. In earlier books, she was reunited with her other grandmother, Mabel Maybank, the wealthy owner of The Chocolate Box, who willed the establishment to Penn before she died. Unfortunately, the rest of Penn’s newfound relatives were less than thrilled at this outcome and have been doing their level best to wrest away her inheritance with lawsuits, threats, obfuscations, and lies. Mabel’s middle daughter, Florence, has finally admitted to Penn that she’s Penn’s mom, but her attitude is quite the opposite of motherly.

But all the family drama is on the back burner for now as Penn volunteers to help out her best friend, Althea, who is the island’s newest Turtle Lady, in charge of making sure newly hatched baby sea turtles make it to the ocean. Althea has taken over the position from Jody, an extremely grouchy woman who has taken it upon herself to be Penn’s nemesis, in no small part due to the growing relationship between Penn and Jody’s ex-husband, Harley. Jody has even vowed to see The Chocolate Box closed and the building it’s housed in sold to her employer, Sunset Development.

So when Jody is found standing over a dead body while holding not one but two smoking guns on the beach near a turtle nest Althea and Penn were watching with several other volunteers, the last thing Penn wants to do is get involved. Unfortunately, Jody’s son Gavin has other ideas. The pre-teen is convinced that Penn’s track record of solving crimes will serve his mom in good stead, so he begs Penn to find the real killer. Knowing only too well what it’s like to feel motherless, Penn agrees.

I really enjoyed getting to know our irascible sleuth and her neighbors in charming Camellia Beach, and I especially enjoyed the ongoing mystery of Penn’s parentage. Penn is such a great creation: complicated and flawed while still being relatable and absolutely hilarious. I don’t think I’ve laughed as much while reading a culinary cozy as I did when she was worrying less about the fact that she’d received death threats than over the accuracy of the unflattering description of herself in one of said death threats. And I loved the depiction of southern island life—so much so that I’ve decided to prolong the magic by buying the first two books in the series! You can expect coverage of those novels in upcoming weeks, as my schedule permits.

In the meantime, I decided to try the most complicated of the three recipes included with In Cold Chocolate: 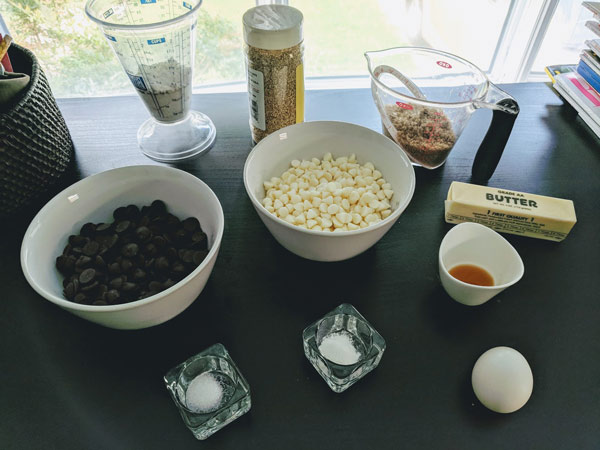 Preheat oven to 325 degrees Fahrenheit. Make sure the oven rack is in the center position for an even cooking.

Toast the sesame seeds by heating them in a dry pan over medium-low heat. You want the seeds to turn a light golden color, so they’ll release their flavors. Keep a close eye on them, you don’t want them to burn.

In a bowl, combine the dry ingredients: flour, baking powder, and salt.

In an electric mixer, beat the butter and brown sugar together until smooth and creamy. Add the egg and vanilla extract. Mix at a lower speed until combined. Add the flour mixture continue to mix at the lower speed until the batter is smooth. Add the toasted sesame seeds and fold in with a spoon.

Line the baking sheets with parchment paper or a baking liner. Using a teaspoon, drop the dough onto the baking sheet. You can use the back of the spoon to help form a round shape in order to make sure your cookies come out moon shaped. Leave about 2 inches between the dough. The cookies will spread. Yes, you want them to spread! 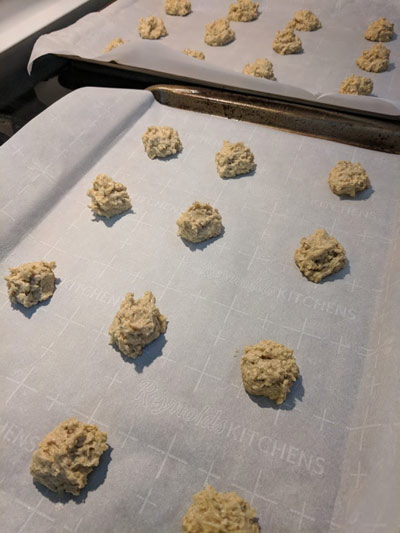 Bake 8 to 10 minutes or until the edges of the cookies turn a dark brown. (This is important, otherwise your wafers won’t have that delightful snap.) Let cook on the baking sheet for 2 minutes. Transfer the cookies to a wire rack to cool completely.

Melt the white chocolate chips using either a double boiler or following the microwave directions on the bag. Using a tablespoon, coat the top of the cookies with the melted white chocolate. Place cookies in refrigerator for 30 minutes to 1 hour to cool. 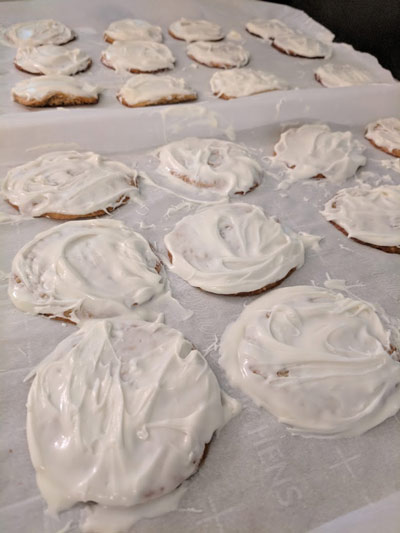 Melt the dark chocolate chips using either a double boiler or following the microwave directions on the bag. Using a tablespoon, coat the bottom of the cookies with the melted dark chocolate. Place cookies in refrigerator for 30 minutes to 1 hour to cool. 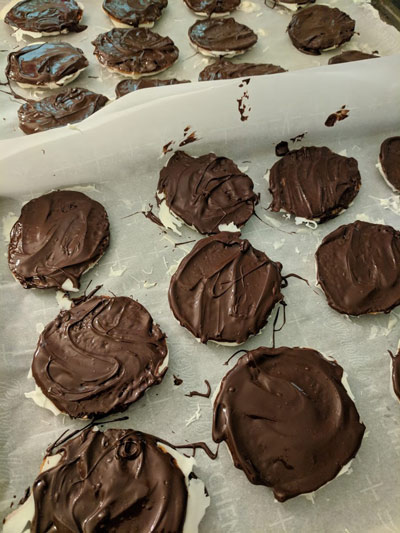 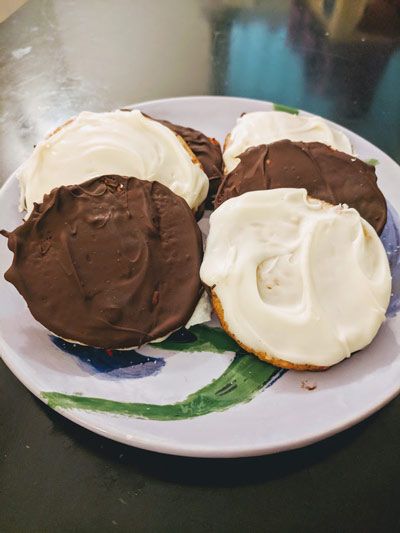 I’m not 100% sure whether I was correctly interpreting “top” and “bottom” when it came to the cookies or whether I was only supposed to cover half of one side with each type of chocolate. I certainly had a lot of chocolate, so I got to use it all in my interpretation.

That said, the result was definitely more candy bar than cookie, which given the theme of the novel, isn’t a bad thing at all. The sesame wafer is a delicious counterpoint to the chocolate, but I do recommend using a very good-quality chocolate, as there is definitely a lot more chocolate flavor to this treat than sesame. Also, I did not include photos of me toasting the sesame seeds because the kind I bought were already roasted and didn’t require that step.

And that was the end of our delightful East Coast tour for now! Next week, we’ll be heading to the Midwest and beyond to continue one of my favorite series with a yummy sandwich. Do join me!

See also: Cooking the Books: Stabbed in the Baklava by Tina Kashian