Cooking the Books: No Grater Crime by Maddie Day

It’s a lovely spring day when Robbie Jordan and her Aunt Adele go antiquing for finds to add to the country store portion of Robbie’s Pans ‘N Pancakes cafe. There’s a definite chill in the air, however, when they run into Francis and Hattie Sand, an older couple who still blame Adele for the death of Francis’s son two decades earlier. To add to the awkwardness, the Sands reveal that they’re the ones behind the revitalization of the store across the street from Pans ‘N Pancakes and that they plan to open an upscale antique business on their new property.

Robbie, being an optimist, is pretty sure that the Sands will be serving a far different audience from those attracted to the vintage kitchenware her store already features. Even if their clientele does overlap, most of her income comes from the cafe anyway. But when some of her merchandise goes missing after the Sands drop by, Robbie’s belief that her new neighbors are as happy to coexist as she is begins to waver.

Then, the very worst happens: a rash of folks are taken to the hospital with food poisoning, and their only commonality was dining at Pans ‘N Pancakes. Robbie has to shut down her cafe as the state investigates, but she’s pretty sure that the root cause was a batch of mushrooms delivered by her regular supplier, FH Foods. When she discovers that FH Foods’s owner is Orland Krueger and that his wife, Krystal, is not only the Sands’ daughter but also the chef-proprietor of the food truck that’s just parked itself right across from her closed cafe, she can’t help but wonder whether someone in the extended Sand family is out to get her. After one of her regulars dies from the food poisoning, resulting in charges of negligent homicide being drawn up against her, Robbie will have to go into full detective mode in order to clear her name. But will her investigations hit far closer to home than she could possibly expect?

This intriguing mystery was a return to form for Maddie Day as she handles hot-topic social issues with sensitivity and grace. I definitely did not expect the plot to go the way it did and genuinely grieved at the deaths that occurred. I do rather wish that the denouement of the mystery had been shown on the page but was delighted that the continuing romance between Robbie and her fiancé, Abe, was given space at the end to truly shine.

There were seven food and drink recipes included of yummy items described in the narrative, and I decided to try out the one that inspired the title. 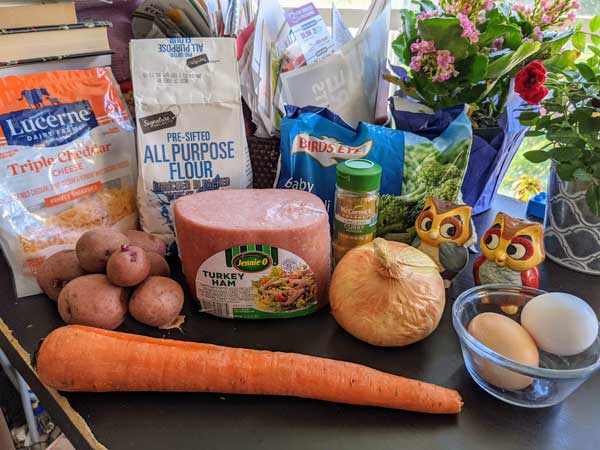 Grate potatoes (a food processor makes quick work of the grating.) Roll in a clean dishcloth and wring dry. Steam broccoli in microwave for two minutes and chop finely.

Grate onion, carrot, and cheese. In a medium bowl, mix together vegetables, cheese, ham, and eggs. Stir together flour, salt, pepper, and curry powder, then stir into other mixture.

Scoop out a half cup of the mixture and flatten into four-inch disks on the parchment paper. Leave a quarter inch between disks; they will not spread. 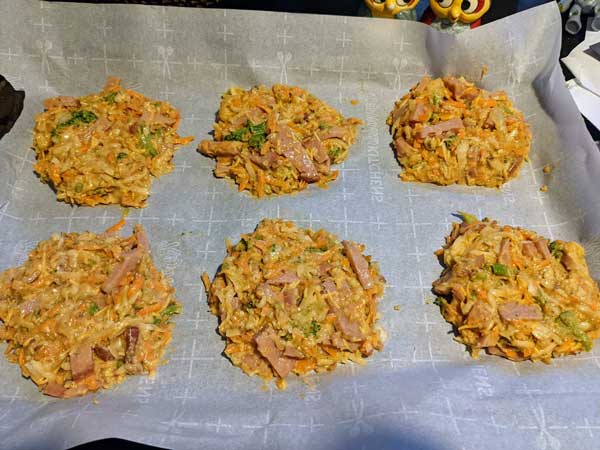 Bake for twenty minutes. Turn and bake ten more minutes or until browned and crispy. Enjoy plain or top with salsa, sour cream, or ketchup.

Serve hot for breakfast, on a toasted sandwich roll for lunch, or with a green salad for dinner. 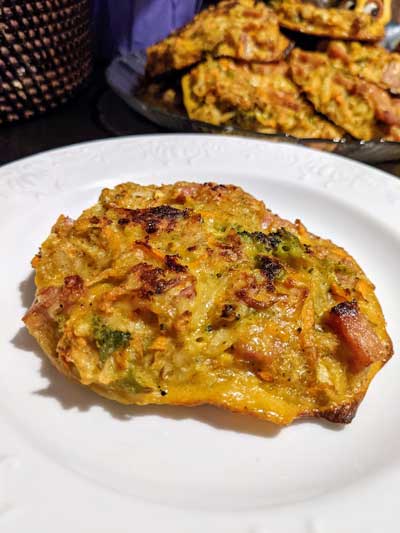 I love this healthy, kitchen-sink cross between an omelet and a hash-brown patty! This recipe is such a great way to use up leftover vegetables and meat; I actually doubled it in order to better utilize some of the extra ingredients I already had at home. The curry powder adds an extra kick of flavor to it, as well. My only regret is that I probably didn’t wring out the potatoes as well as I could have, which resulted in a less-than-crisp patty. It was still very tasty, though I should definitely wring my grated potatoes out more thoroughly the next time I make this dish.

Next week, we start getting into the spirit of spooky season with a trio of murderous novellas while whipping up a delicious party treat. Do join me!