Tearoom proprietress Lily Roberts is looking forward to making the most of the busy Cape Cod summer tourist season, especially since any profits earned now will help tide Tea by the Sea over their much less lucrative winter. So it’s a pleasure for Lily to help host her beloved grandmother Rose’s dear friend from Iowa, Sandra McHenry. Sandra and her socialite granddaughter Heather French had planned for a seaside getaway that somehow turned into an extended family reunion, with Heather’s parents, Brian and Darlene, as well as her brother, Lewis; his wife, Julie-Ann; and their teenage children, Tyler and Amanda, along for the ride. While Rose’s B&B, like the tearoom, is also happy for the increased business, Lily and Rose soon discover that the individual members of the McHenry family seem to have a very difficult time getting along.

Apparently, none of the adults except Sandra had approved of Heather marrying her much older husband, Norman—at least until he’d turned out to be a tech whiz who made a killing developing software. The Frenches subsequently moved to Manhattan, leaving behind both Iowa and Heather’s contentious, demanding family. Alas, Norman’s premature death left Heather a widow too soon after. At Sandra’s urging, Heather is now trying to reconcile with what family she has left.

In Heather’s mind, however, this includes making amends with Ed and Trisha French, Norman’s brother and sister-in-law, who’ve also been invited to Cape Cod. There’s a history of bad blood between the McHenrys and Frenches that precedes even her marriage, but any hopes Heather has of turning her loved ones into one big happy family are dashed when Ed ingests something poisonous, apparently while dining at Tea by the Sea.

Unsurprisingly, Ed’s death shuts down Lily’s tearoom while the vindictive Detective Chuck Williams and his competent if often sidelined subordinate Detective Amy Redmond investigate. Lily is convinced that someone from the McHenry-French party must be responsible, but they seem to be closing ranks against outsiders and insisting that Ed must be the victim of a serial poisoner who chooses victims indiscriminately if not incompetence on the part of the tearoom’s staff. Lily, however, is determined to shake their composure and flush out the person who not only killed a man in cold blood but was willing to end her livelihood in the process.

I’ll admit that while I suspected something of the outcome, the actual identity of the killer came as a total surprise to me in the very best way! I always love being genuinely shocked by a well-written murder mystery, so kudos to Vicki Delaney for this terrific whodunnit. It was nice as well to see Lily’s relationships with her friends and family continue to develop, even as I’m rooting for her and Simon to go hang out already! Her new gardener might be leaving in a few months, but that doesn’t mean they can’t spend a few pleasant afternoons establishing a friendship, if nothing more. I’m really hoping we’ll see more of them together in the next book.

This volume included three yummy recipes. As loyal readers will know, I can’t resist any variation on egg salad, so despite how tempting the shortbread and chocolate chip cookie recipes sounded, I had to try out this flavorful twist on the classic. 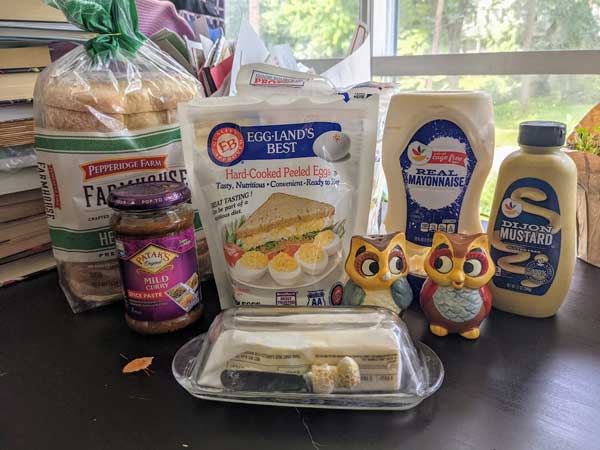 Spread on lightly buttered bread, top with another slice of bread, and cut into triangle shapes. 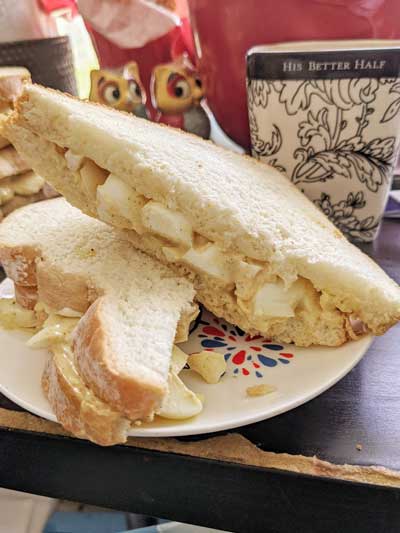 Like Rose, I’m a traditionalist who can still appreciate a delicious innovation, and I absolutely adored this spiced-up version of one of my favorites. Since I’m terminally incapable of cutting off crusts for dainty tea sandwiches, I served this curried filling on hearty white bread for my family’s lunch. These were all gobbled up quickly, and I’m definitely thinking of adding curry paste and mustard the next time I get a hankering for egg salad sandwiches.

Next week, we head over to the west coast to make some delicious breakfast offerings while investigating a dreadful death. Do join me!