Cooking the Books: Murder, She Knit by Peggy Ehrhart

This first novel of the Knit and Nibble Mystery series introduces us to Pamela Paterson, the widowed associate editor of a fiber arts magazine who mostly works from the home where she now lives alone since her only daughter went off to college. Pamela enjoys living quietly in the small town of Arborville, New Jersey, where she can walk to the co-op for groceries then scavenge for interesting cast-offs behind the swanky apartment building situated on her path home. Her best friend, Bettina, lives across the street from her, but the social highlight of their week is the meeting of their yarn crafters’ group, hosted on a rotating basis by each member.

When Pamela runs into Amy Morgan, an old co-worker of her husband’s, out by the co-op, she impulsively invites the younger woman to join her crafters’ club. Amy had been kind to her after her husband’s death, and she figures she ought to return the favor given that Amy has just moved to town. Unfortunately, Amy is a no-show for the club’s next meeting, causing Pamela to ruefully wonder if she’d misunderstood their relationship. But then, she discovers Amy’s corpse in the hedge between her house and the church next door, stabbed to death with a knitting needle.

Given the nature and timing of Amy’s death, Pamela can’t help but wonder if one of her own friends was responsible for the murder. After Amy’s odd sister shows up on her doorstep, however, and Pamela finds out a lot more about Amy’s life, her circle of suspects expands. Pamela and Bettina really get into the swing of investigating, but then Pamela stumbles over another body—and realizes that sleuthing may be putting her in more peril than she ever expected.

I very much enjoyed going back to the start of this series and seeing how everything first came together, particularly Pamela’s Knit and Nibble group. Roland and Melanie were especially delightful to meet, as time hasn’t yet rounded off any of Roland’s edges. I also enjoyed traveling with Pamela and Bettina as they explored New York City and their own surrounding towns in pursuit of clues. I’ve stated before how much I enjoy Pamela’s introverted personality—a rare trait for a culinary cozy heroine—and it was really nice to be able to fill in the blanks of her history from where I started covering this series for this column with later books.

As always, there’s a knitting pattern included, as well as a recipe!

Use crisp, slightly tart apples; even Granny Smith or other green apples will work 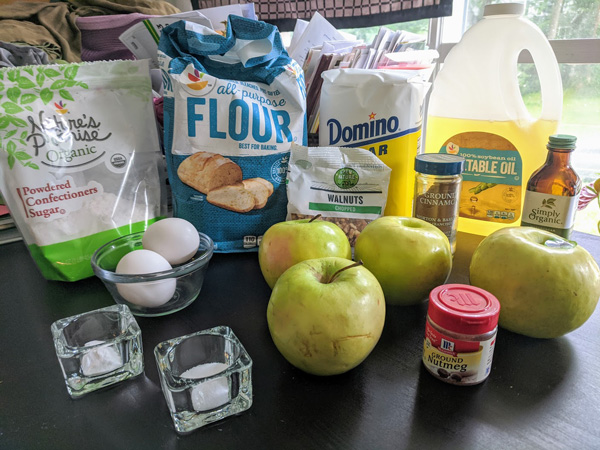 Core and peel the apples. To do this easily, quarter them first, then slice the cores out and peel the quarters. Chop or coarsely grate the apples. You want about 4 cups’ worth. Place the apples in a small bowl, add the sugar, and let the mixture sit for an hour.

Sift the flour, baking soda, salt, and spices into a large bowl. 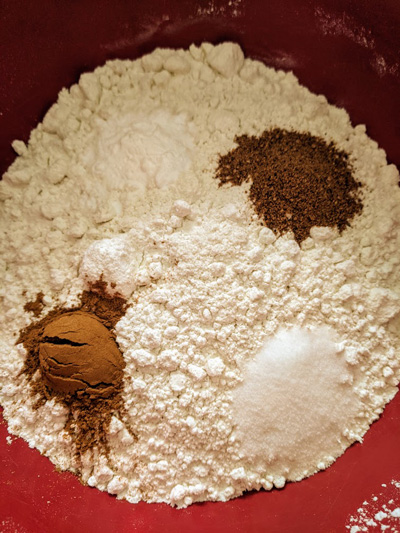 Using a beater, mix in the oil, eggs, and vanilla, and then stir in the apples and sugar, and the walnuts, by hand.

Turn the mixture into a greased tube pan and bake for one hour at 350 degrees. 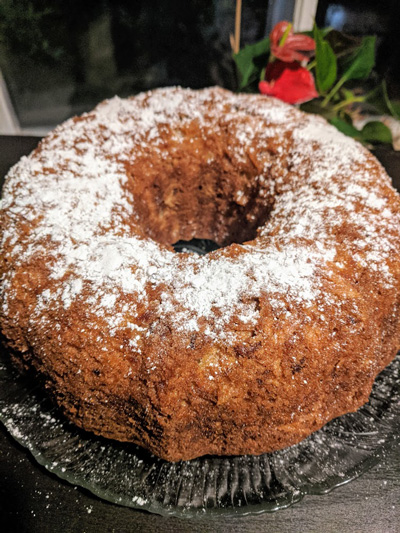 If you like, you can offer whipped cream or vanilla ice cream when you serve the cake. 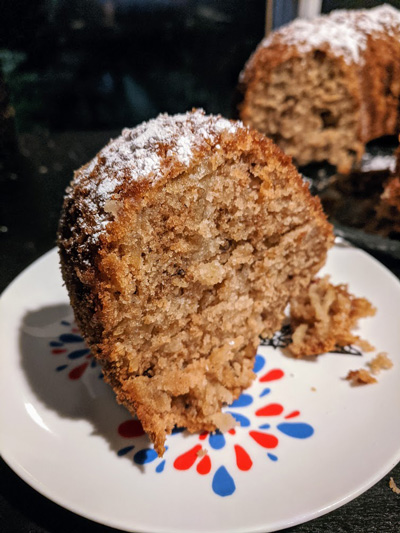 I’m not ordinarily a fan of nuts in cakes, but I decided to go ahead and throw in a quarter-cup or so of walnuts that I had languishing in my pantry from another recipe instead of the cup recommended. That definitely made a difference for me, adding just enough crunch without interfering with the cake’s delightfully springy moistness. I firmly believe that using grated apples instead of chopped also helps improve the uniformity of the cake’s texture, so I absolutely recommend that. I also used Granny Smith apples because those are my baking go-to, and the results were terrific, as usual. I did eschew Peggy Ehrhart’s advice and just peeled the apple whole, though.

Next week, we stick around in Arborville to bake one of my favorite dessert treats while solving murder most foul. Do join me!

See also: Cooking the Books: A Sprinkling of Murder by Daryl Wood Gerber