Amy Pershing really hits her stride in this, the third book of the Cape Cod Foodie Mystery series. Our heroine is Samantha Barnes, a former NYC chef with an unfortunate penchant for viral online notoriety. Nowadays, she lives a quieter life on the Massachusetts coast, writing a food column and doing video segments as the Cape Cod Foodie for the local paper while fixing up the home she inherited from her late Aunt Ida.

With the Fourth of July just around the corner, Sam is thinking of hosting a big picnic for her friends. Her boyfriend, Jason Captiva, will also be back from the West Coast where he’s been undertaking professional training as a harbormaster for the past few weeks. Sam has mixed feelings about this, mostly due to her own commitment issues. She is definitely looking forward to spending time with all her loved ones, though, especially after she discovers the perfect blueberry buckle to serve them while dining at famed local restaurant Clara’s Place.

The owner, Ed, happens to be Jason’s cousin, but the restaurant itself was founded by the legendary Clara Foster, who is happy to share her buckle recipe with the younger woman. She invites Sam over to her home, and the two women plan to tape a Cape Cod Foodie segment featuring the buckle. In the process, Sam and Clara grow genuinely fond of each other, with Sam promising to come back the day after filming in order to return a basket Clara loaned her.

So imagine Sam’s devastation when her editor, Krista Baker, asks her to write Clara’s obituary the next day. Apparently, Clara had died of smoke inhalation from a house fire the night before, caused by leaving a pan burning over an open flame. Sam refuses to believe that a seasoned chef like Clara would be so thoughtless as to accidentally start a fire that way. The ever-pragmatic Krista decides that this attitude means that Sam is the perfect person to cover the story and sends her off to the crime scene to get the full details.

As Sam strikes up a tentative friendship with lead investigator Detective Vivian Peters, she becomes increasingly convinced that someone deliberately staged the fire in order to kill Clara. But who could have possibly had it in for the local cooking icon? Perhaps more importantly, who would have profited from her death?

I really enjoyed spending time with Sam as she wrestled with all sorts of doubts and insecurities in the process of not only solving the mystery of Clara’s demise but also figuring out her future with Jason. It was a delight to watch her entirely unwarranted worries about Vivian transform into a genuine friendship. The murder mystery and its solution unfolded organically, but most of all, I was struck by the wisdom of Sam’s beloved neighbor Helene when she talked about how “people with only one truth can be very dangerous.” This was an extremely wise take on the culinary cozy, with just the perfect amount of Cape Cod summertime flavor to really transport readers to the setting.

There were three recipes included here, arrayed as a delightful picnic menu. I decided to try out the appetizer because I love seafood dips. 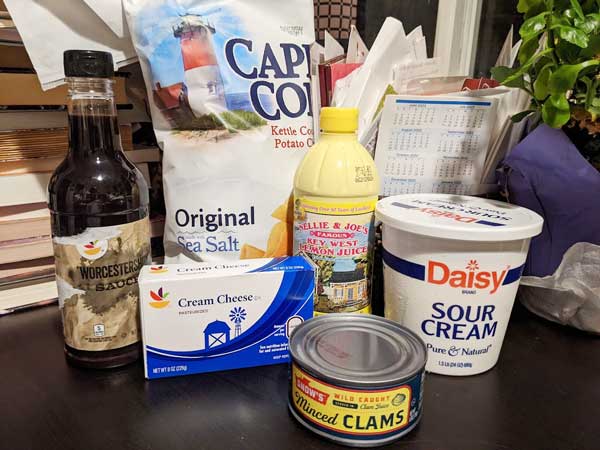 Drain the clams, reserving 2 tablespoons of the liquid, and mash into the softened cream cheese. Add the clam liquid, sour cream, Worcestershire sauce and lemon juice, and blend well. 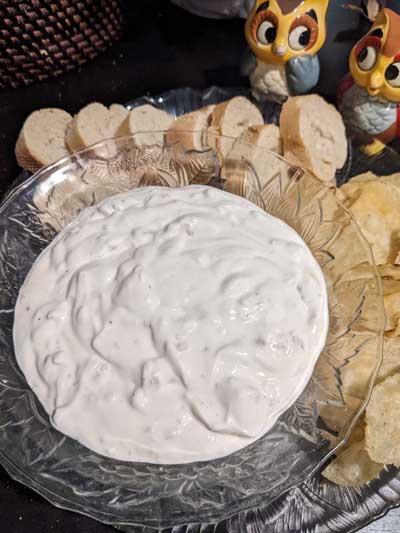 This was very delicious and very easy to put together, but I really wish there had been more clam in it! Maybe it’s just the type of canned clam I had, but I would definitely put another drained can of clam meat in there. That aside, the flavors were totally on point, and Cape Cod Potato Chips were absolutely fabulous for this. While I did slice up a few baguette rounds as a lower sodium alternative, I found that the saltiness of the potato chips was perfect for the amount of rich creaminess here. This is definitely a dip I’ll be having again over the summer (with the addition of a little more clam meat!).

Next week, we stay in the area to whip up a soup from my very favorite culinary cozy author, as small-town grievances give way to murder. Do join me!