Whether she’s writing under her own name or under the nom de plume Maria diRico, I love Ellen Byron’s culinary cozies. With her latest mystery series, she takes us back to her beloved Louisiana with our heroine, the New Orleans-born but Los Angeles-raised Miracle “Ricki” Jones-Diaz.

Ricki was abandoned shortly after birth but was swiftly adopted by a hospital nurse who later married and moved to L.A. After a series of life-changing events, including but not limited to her parents’ decision to move to Puerto Vallarta after their retirement, Ricki decided to leave L.A. as well. New Orleans seemed a natural destination for someone still curious about her birth parents, whom decades of searching had turned up little information on. Perhaps being closer to the place where she was born would help her eventually solve that mystery.

But first, Ricki needs to successfully launch her latest project: opening a vintage cookbook and notions store on the grounds of the historic Bon Vee Culinary House Museum. New Orleans has a history of both culinary excellence and appreciation, as evidenced by the very existence of the museum in the home of the late, legendary restaurateur Genevieve “Vee” Charbonnet. Vee’s niece Eugenia now runs the Bon Vee Foundation board and is interested in Ricki’s idea for a gift shop, which the museum has until now lacked.

Of course, not everyone is as enthused. Eugenia’s nephew Theo considers the whole idea a boondoggle, and that’s even before Ricki has less than pleasant run-ins with several other members of the museum’s staff. Ricki tries to take everything in stride, but even her laidback California ways are sorely tested when one of the tour guides, Franklin Finbloch, is caught stealing from her store and, by extension, the museum.

When Ricki finds Franklin dead soon after, stabbed with an antique can opener from her shop, she immediately feels responsible—not because she killed the man but because her own unusual past makes it difficult for her to turn a blind eye when she could be helping to bring criminals to justice. Despite the wry treatment she gets from the homicide detective in charge, Ricki decides she needs to investigate as best she can—and perhaps solve a few other mysteries in the process. But how willing is she to risk her own life while chasing down the truth in a still unfamiliar town?

The writing throughout this book is so lively and engrossing; I did the reading equivalent of gulping this down like the most refreshing drink as I followed Ricki’s entirely lived-in exploits. Ms. Byron’s ability to weave together several different plot threads is consistently excellent, with wonderfully colorful characters and situations that were suspenseful and humorous in turn. This was an outstanding series debut, and I’m eager to read more—especially with the revelation provided in that epilogue!

Befitting a novel revolving around vintage cookbooks, there were six recipes included inspired by the author’s personal collection. It took me a while to figure out which one I wanted to try, but I finally decided on this one, adapted from 1975’s Country Fair Cookbook: Every Recipe a Blue Ribbon Winner: 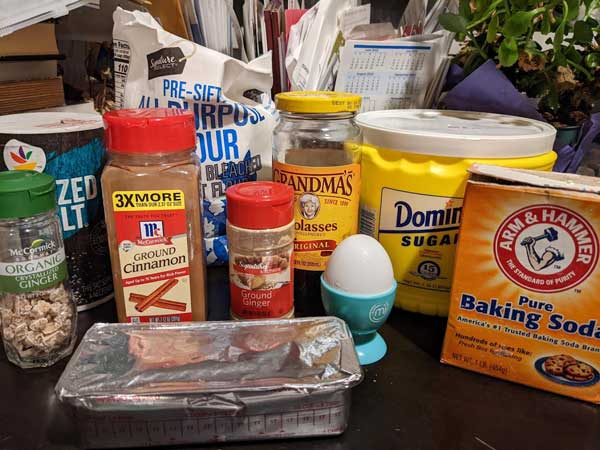 Sift or stir the flour, baking soda, ginger, cinnamon, and salt together. 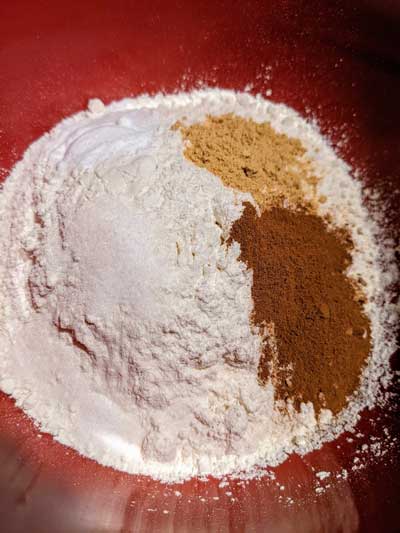 In another bowl, cream the shortening and sugar together until the mixture is light and fluffy. Add the egg and beat well, then beat in the molasses.

Add the dry ingredients to the shortening mixture, alternating with the hot water. Beat the batter well after each addition to combine the ingredients.

Pour the batter into the greased 9-inch square baking pan and bake for 45 minutes or until the cake is done, which you can determine by either pressing the top to see if it bounces back or inserting a toothpick that comes out clean. 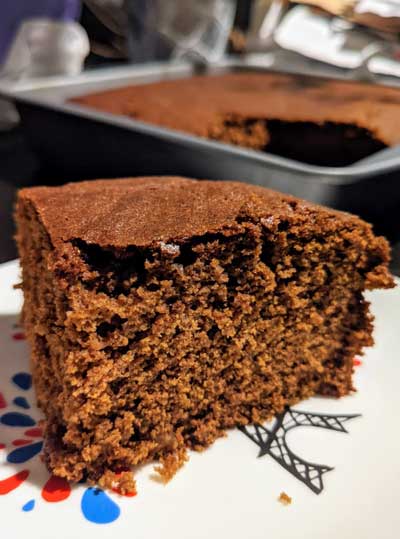 I wasn’t sure when exactly to add the crystallized ginger but figured that mixing it into the batter last before pouring it all into the greased pan would work out best. That done, this came out almost exactly as I expected an old-fashioned gingerbread would! It does feel a little heavy by modern standards, so I’d recommend serving this with copious amounts of whipped cream to lighten the mouthfeel. While this cake serves nine, cutting it into smaller slices helps make it feel even less vintage than contemporary, especially with the whipped cream.

Next week, we travel northeast to make a savory seafood appetizer while looking into the death of another famed restaurateur. Do join me!