Cooking the Books: Mulled to Death by Kate Lansing

Vintner Parker Valentine is looking forward to a working vacation with her boyfriend, Reid; her brother Liam, and her best friend, Sage—the latter two of whom are dating as well. The foursome is headed to the Silver Creek Lodge where Parker plans to pitch her Snowy Day Syrah and accompanying mulling spices to the ski resort’s wine director. Since her meeting coincides with Valentine’s Day weekend, the four friends have decided to make a couples’ getaway of it, even though Parker herself has a lot of reservations about the holiday, mostly to do with the untimely passing of her beloved Aunt Laura.

Fortunately, Parker and Reid have promised each other no gifts this first Valentine’s they’re spending together, even though Parker hasn’t really told him why she’s so lukewarm on the idea. With the important business meeting occupying her thoughts—not to mention all the skiing and snowboarding the rest of the group is intent on doing—there isn’t much time for an emotional heart-to-heart either. Plus, the appearance of the resort’s famous owner, glamorous former Olympic athlete Annmarie Bauer, is more than enough to dominate all conversation, for which Parker is secretly glad.

She’s very much not glad, however, when Annmarie dies while skiing down the most difficult of the lodge’s runs. Parker was on a neighboring course when the tragedy happened and isn’t sure whether she saw something suspicious in the lead-up to Annmarie’s accident. Sheriff Jenny Scott doesn’t think Annmarie’s death was accidental at all, though, so she’s happy to entertain Parker’s concerns. As a rash of thefts and a series of other weird and dangerous incidents begin to plague the resort, Parker wonders whether she did indeed see something she shouldn’t have—and whether a killer is ready to eliminate the only witness to what truly happened on the slopes that day.

This was another fun, millennial-focused installment of the Colorado Wine Mystery series. Mulled to Death touched deftly on many headline-inspired issues in the course of laying out its tricky mystery, which along with Parker and Liam’s sniping sibling relationship grounded the story in reality (though, I freely admit to being on Liam’s side when it comes to weekend work and work-life balance).

There were three recipes included here: a delicious snack, a tasty soup, and decadent cupcakes. I was quite torn but ultimately decided on the soup. 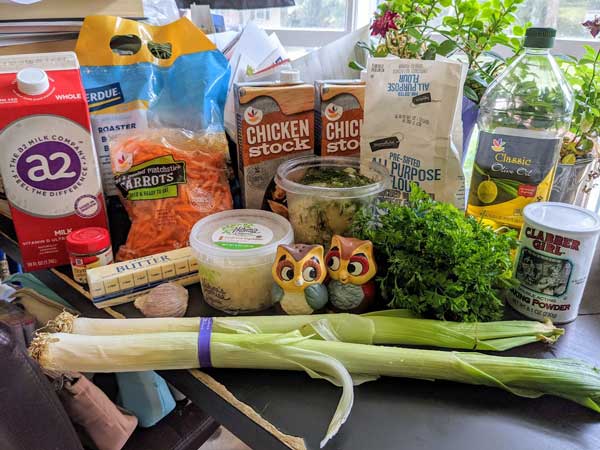 1 whole (2 split) chicken breast, bone in and skin on

Coat chicken breast with olive oil and place on sheet pan. Sprinkle with fresh-ground black pepper and salt and bake for 45 minutes. Once chicken is cool enough to handle, remove the meat from the bone, discarding the skin. Dice into 1-inch pieces.

In large pot, add 2 tablespoons of olive oil, the onion, carrots, celery, leeks, and ½ teaspoon of pepper and a pinch of salt. Sauté together, stirring occasionally, for 6 to 8 minutes, or until onions are translucent. Add garlic and cook for 1 minute. Add chicken stock, chicken, and parsley, and simmer for 30 minutes.

In a bowl, combine flour, baking powder, thyme, and pinch of salt. Cut in butter until mixture resembles fine crumbs the size of peas. Stir in milk. Drop teaspoon-sized spoonfuls (the dumplings expand a surprising amount!) into the soup. Cover and cook for 10 minutes.

To serve, ladle broth, chicken, veggies, and dumplings in bowls and enjoy! 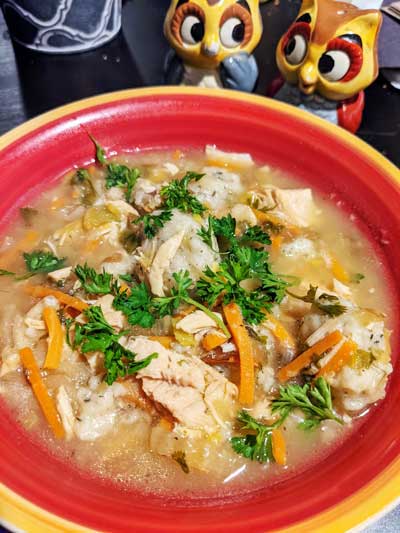 The preparation of the chicken for this soup is outstanding, leaving it perfectly tender and juicy, melding almost perfectly with the delectable vegetables. I actually poured some of the roasted chicken juices into the soup to give it further body and also because I couldn’t stand the thought of just pouring all that tasty liquid down the drain. I definitely snacked on the roasted chicken skin as well!

The only thing I’d change about this recipe is perhaps increasing the salt level of the thyme dumplings. They’re delightfully herbaceous, but I could use a little more than just a pinch of the salt to really bring out the flavor, in my opinion.

Next week, we continue our run of savories with a delicious pasta as we go back to the beginning of a series by one of my favorite culinary cozy authors. Do join me!