Cooking the Books: Mistletoe, Moussaka, and Murder by Tina Kashian 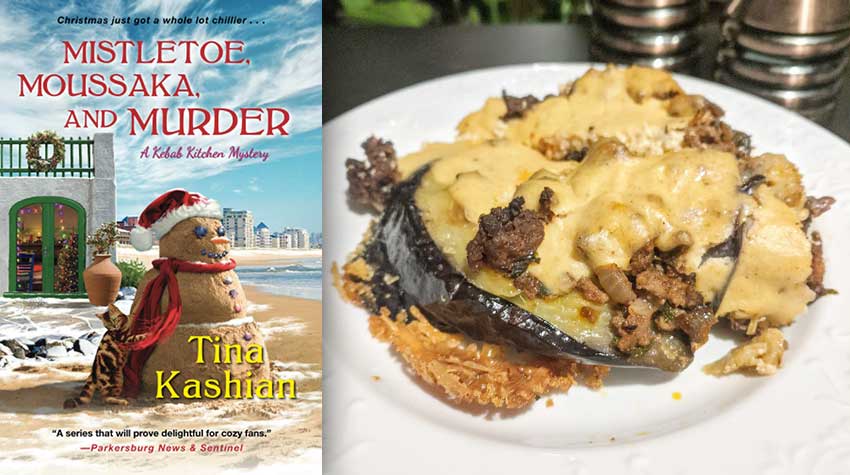 It’s wintertime in Ocean Crest, New Jersey, and our heroine, Lucy Berberian, is trying to persuade her best friend, Katie Watson, to join her in jumping into the Atlantic Ocean for a Polar Bear Plunge to benefit the town’s senior center. Most of the town’s businesses are sending a representative, and Lucy is carrying the flag for Kebab Kitchen, her family’s restaurant. Katie would much rather spend her time planning Lucy’s wedding, but since Lucy and her fiancé, Kebab Kitchen’s head chef Azad Zakarian, haven’t yet set a date, she reluctantly allows Lucy to cash in some best friend points in order to get her to go along.

As if plunging into the freezing cold ocean isn’t tumult enough, Lucy, Katie, and the other polar bears are shocked when one of their own dies in the water. At first, everyone assumes a heart attack killed Deacon Spooner, the unpopular owner of a reception hall Lucy and Katie had recently visited while scouting potential sites for the wedding, but fresh bruising around his neck and shoulders indicates that someone had deliberately held him down in the water to drown.

Local bakery owner Susan Cutie immediately comes under suspicion, in large part because she’d been overheard saying she wanted to drown Deacon just minutes before the starting whistle. When the cops come calling, she enlists Lucy’s aid—and not just because her friend used to be a lawyer before returning to their seaside town. Lucy has had some success bringing murderers to justice, and Susan knows Lucy is the best shot she has at clearing her name. But Susan has secrets she’s not willing to share. Even though Lucy uncovers plenty of other people who might have wanted Deacon dead, Susan’s secrets may prove her own undoing.

As always, Tina Kashian knows how to write a solid mystery, delivering yet another in her fifth Kebab Kitchen Mystery. It was also diverting to follow along as Lucy sought to balance her concern for her friend with her own understandable preoccupation with the business of being engaged. Ms. Kashian explores the many complicated emotions Lucy has about her family’s expectations, her possible future with Azad, and how her guilt at not being able to quickly figure out Deacon’s killer gets in the way of her ability to truly relish not only her engagement period but also the holiday season.

There were four delicious-sounding recipes included here, and since I’ve always wanted to try making moussaka, I decided on this recipe for the titular dish: 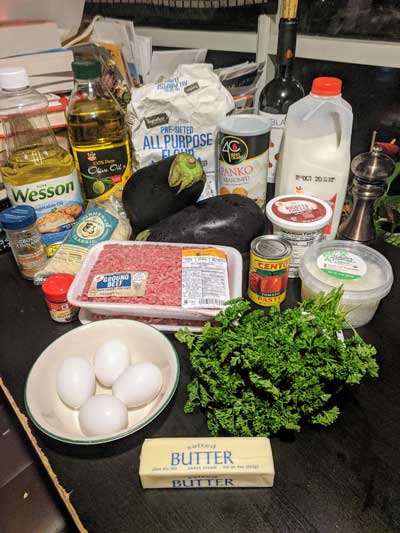 Heat ¼ cup extra-virgin olive oil in a skillet and cook the onions until they turn transparent. Add the ground meat and cook until fully cooked. Transfer the meat to a large strainer set over a bowl and drain off any excess fat. Return meat to the pan and heat. Add the tomato paste, wine, parsley, and cinnamon. Season with salt and pepper to taste. Stir and simmer over low heat until all the liquid has been absorbed. Remove from heat and set aside.

Cut unpeeled eggplants into ½-inch-thick slices. Lightly salt the slices and let them sit for five minutes. Heat ¼ cup vegetable oil in a separate skillet. Working in batches, fry the eggplant slices until they are golden brown on both sides. Set eggplant slices aside on sheet pan lined with paper towels to absorb the oil. Preheat oven to 375 degrees F.

In a saucepan, melt the butter over medium heat. Add the flour and cook, whisking constantly, until the mixture is smooth. In a separate saucepan, bring the milk to a boil and add it gradually to the butter-flour mixture. Whisk constantly. When the mixture is thickened and smooth, remove it from the heat. In a bowl, whisk together beaten eggs, nutmeg, and ricotta cheese. Add it to the bechamel sauce and whisk until smooth.

Bake for 45 minutes or until the top is browned and bubbly. Allow it to cool for twenty minutes before serving. 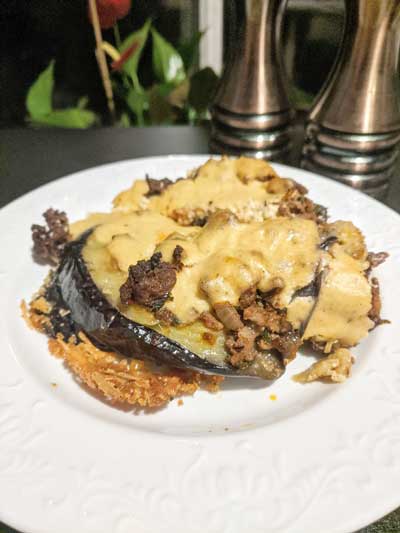 I’m so glad this was delicious because it took me literally hours to make. The longest part of it was probably frying the sliced eggplants. I should have done that in two pans at once in order to save some time. Since the recipe wasn’t totally clear about the amount of nutmeg to use, I decided on the same amount as for the cinnamon: a quarter teaspoon. This does wind up making a party-sized amount of moussaka, so we had a lot of yummy leftovers even after sending a nice portion over to neighbors. It reheats well, with my husband calling the reheated portions “meat brownies” for their dense, savory richness.

Next week, we make an amazing (and easy!) seasonal treat while sleuthing in my home state. Do join me!