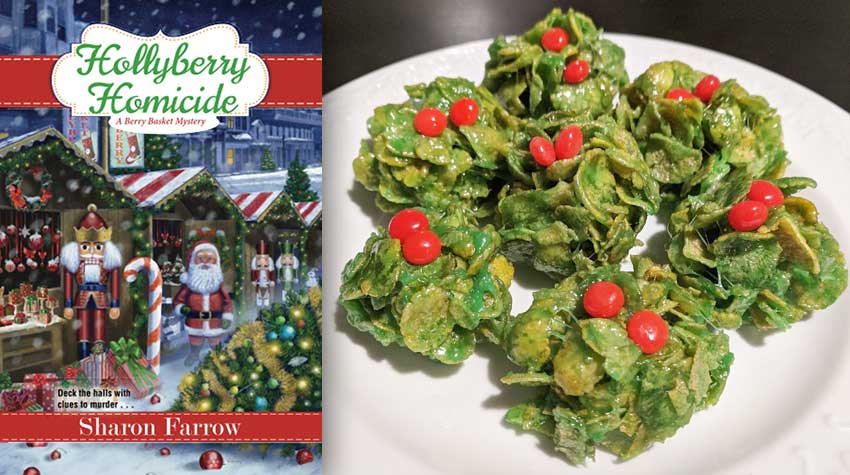 It’s December in Oriole Point, Michigan, which means two things: the Hollyberry Festival, organized by indefatigable town booster Piper Lyall-Pierce, and the annual town production of A Christmas Carol. When perennial Jacob Marley portrayer and theatre benefactor Everett Hostetter is found dead, the immediate assumption is that the wealthy 95-year-old finally succumbed to old age. Marlee Jacob, berry store proprietor and accidental sleuth, is none too happy to be the discoverer of yet another corpse when she happens upon him, but she’s secretly relieved that at least Everett—unlike some of her other discoveries—shows no sign of having come to his end via foul play.

She is less relieved when her puntastic name immediately gets her roped in to replace Everett onstage. With less than a week to prepare for the play and business and festival preparation taking up so much of her time, she’s finding it difficult to learn her lines—and that’s even before she finds herself embroiled in the search for Everett’s will. But the more clues Marlee uncovers regarding Everett’s legacy, the more she suspects that not only was Everett murdered but his killer will strike again and soon.

I love Sharon Farrow’s Berry Basket Mystery series, which features the most consistently gripping culinary cozies on the market. Her plots are always intelligent, and in this installment, she upends several of the unwritten rules of the genre, resulting in a truly surprising and suspenseful end reveal. The parallels between the murder mystery and Charles Dickens’s seasonal ghost story were also very clever, adding another layer of depth to her tale. I also loved catching up with all the supporting cast, from Marlee’s variously sweet and snarky employees to all her awesome and diverse friends. While you definitely don’t need to have read the five preceding books to understand and enjoy this one, I can’t recommend reading this series through from the start highly enough!

There were three berry-related recipes included in this volume, and I absolutely had to try out this variation on my all-time favorite cookie recipe, lightly edited here for format: 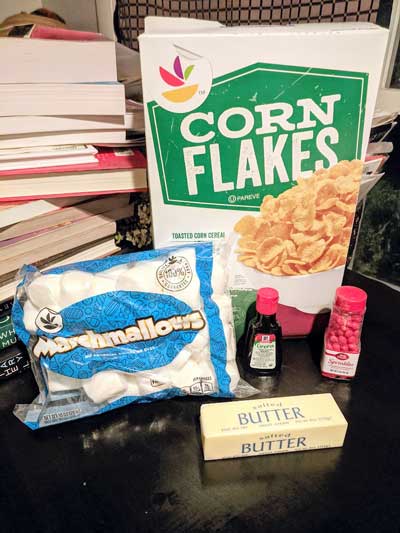 Stir until all the marshmallows are melted. Mix in the green food coloring.

Stir in the cornflakes cereal, until all pieces are coated.

Drop by spoonfuls onto wax paper. Press 3 cinnamon candies into each cornflake cluster. 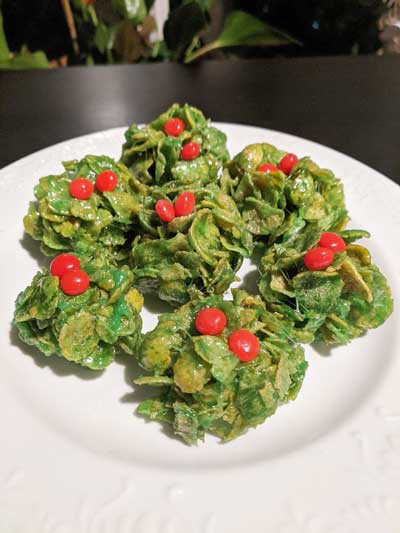 I love cornflake cluster cookies and had never thought of how much they look like little piles of leaves before this recipe! The food coloring and melted marshmallow mix lend the cornflakes a nice glossiness that really evokes greenery, so much so that my kids called these “salad cookies” upon initially seeing them. Being a good mom, this helped me get them to delay pillaging all the cookies, as they were convinced that anything this color had to be good for them and thus needed to be avoided—at least until they discovered how delicious these are!

I will recommend that you use the soft or chewy version of Red Hots for this recipe though, as I found myself very carefully eating around the harder cinnamon candies I found in the baking aisle to use here. I am a little weird about texture in soft baked goods (see: my antipathy to nuts in cookies and brownies), though my caution may also be due to having had braces for a really long time and thus being wary of crunching down on hard things. While you can bypass this issue by eliminating the use of the Red Hots entirely, the spiciness does add a nice kick that I highly recommend. Plus, they just look cuter with the little red spheres. These are a fast, festive addition to any holiday cookie plate, and I’m really looking forward to making them again!

Next week, we head to the Jersey shore to make a yummy if labor-intensive main dish while solving another devious murder. Do join me!