Mia Carina is throwing herself into making a success of her family’s Belle View Banquet Manor, ostensibly because she wants to make sure her Mafia-connected dad stays on the straight and narrow. Annoyingly, certain friends and family members are starting to drop hints that she’s using work to avoid her lack of personal life. Ignoring them, she decides to focus on planning the best baby shower possible for another good friend, Nicole. Surprised to learn that Tina Karras, Nicole’s stepmother (or step-monster as Nicole’s grandmother calls her), is also throwing a baby shower for Nicole at the incredibly swank Versailles on the Park, Mia decides to take the opportunity to check out the competition and is chagrined by how her business pales in comparison.

But for all that the Versailles on the Park event is extravagantly lavish, Mia knows that it lacks the personal touch her business can provide. Everything seems to be going well at Nicole’s Belle View shower—until Tina gets into a blowout fight with Linda, Nicole’s mom. Mia does her best to smooth things over and bring the focus back to celebrating Nicole and her baby. That is until Nicole unwraps a bizarre present: an expensive painting that turns out to have been stolen. Tina, of all people, reacts the most strongly, and the baby shower ends with the cops coming in to take custody of the painting.

Still, the shower overall seems to be a success—until Mia discovers Tina’s body floating in the waters of the bay behind Belle View. When Linda becomes the prime suspect in the murder, a distraught Nicole begs for Mia’s help investigating. Linda and Tina might have had bad blood, but there’s no way Nicole’s mother is a murderer. Mia must get to the bottom of things in order to put her pregnant friend’s mind at ease. Besides, she of all people knows what it means to protect her family.

This second installment in the Catering Hall Mystery series was just as much fun as the first, with realistic characters I genuinely enjoyed spending time with. The mystery was complicated and clever, and the dialog witty and believable. It was also really great to have a mystery set in Astoria-Queens; small-town cozies are awesome, but it’s always refreshing—and frankly more easily relatable for me—to have that aesthetic transplanted to the big city.

There were four recipes included here, all of which played a part in the narrative, and I decided to try making this cookie-baklava hybrid: 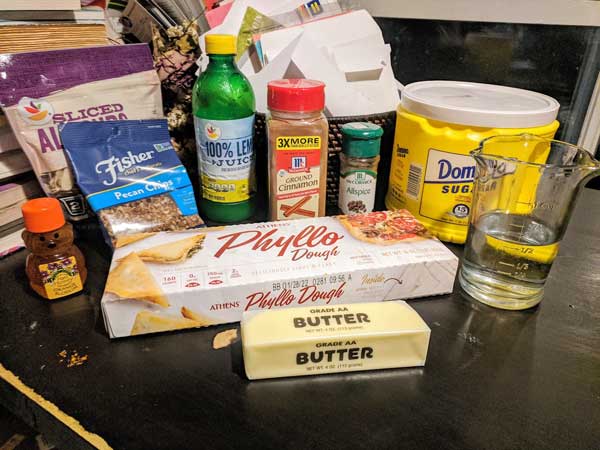 Combine the ground nuts, sugar, cinnamon, and allspice. Set aside.

Place two sheets of phyllo dough on a sheet of parchment paper larger than the dough. Brush the phyllo dough with melted butter. Sprinkle the dough with ¼ cup of the nut mixture. Roll the dough tightly but carefully from the long side upward, creating a slim log. Slice the log into four pieces and set each into a greased 13 x 9 baking dish. You can pack the rollups tightly–they won’t expand. (Note: keep the unused phyllo dough covered with a wet cloth or paper towel so that it doesn’t dry out.) When you’ve finished making the rollups, bake for 14-16 minutes until they’re light brown. Let them cool.

While the rollups are in the oven, make the syrup. In a small saucepan, combine the honey, sugar, water, and lemon juice. Bring to a boil, then reduce heat and simmer for around five minutes. Remove from the heat and let cool for about ten minutes. 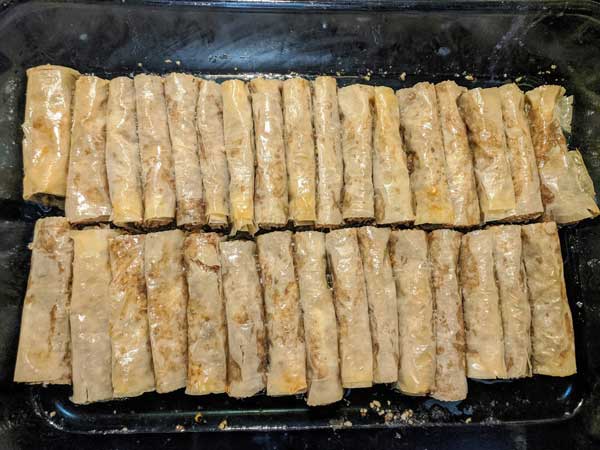 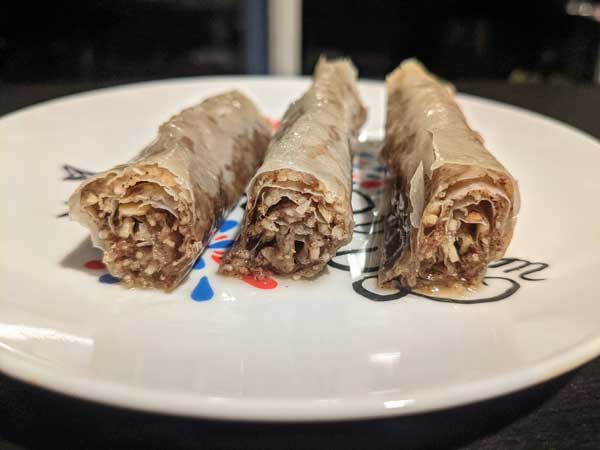 These rollups were even easier to make than I expected! I actually wound up making 32 rollups from the ingredients I had, without extra nut mixture at the end. Speaking of nuts, since I had trouble finding ground versions at the grocery store, I just pulsed the ones I had with the sugar and spices, which made for a really nicely integrated mix. These cookies keep quite well, though I did roll them over in the syrup so that they were evenly coated and didn’t end up being mushy on one side. My family and I very much enjoyed these over the course of several days.

Next week, we’ll be heading to the Midwest to bake up a savory treat while solving a murder in a series debut. Do join me!