Mayor Bascomb had been pretty irritable in the days before his death. When Sheriff Bill Todd pulls the mayor’s nephew over for driving under the influence, the mayor gets upset at Bill for not letting Bruce go with a warning. Andrea goes to bat for her sheriff husband, but even her patience has its limits. When Mayor Bascomb’s insults cross the line, she slaps him so hard he falls out of his chair—to the shock of both Hannah and the secretary waiting outside his office.

Several hours later, after Andrea has had time to cool down, she decides to go back to City Hall and apologize to Mayor Bascomb, bringing with her a slice of Hannah’s terrific triple chocolate cheesecake as a peace offering. Imagine her horror when she finds the mayor face down on his blotter, blood seeping from a head wound. She immediately calls Hannah, who leaps into action to protect her sister as well as, inevitably, to investigate the murder.

The list of suspects is longer than for any other case Hannah has previously looked into, as the mayor had plenty of people who wished him harm. Aside from political rivals, Mayor Bascomb was a well-known philanderer whose long-suffering wife, Stephanie, is good friends with Hannah and Andrea’s mother, Delores. Could the murderer have been a callously discarded former lover or a romantic rival still smarting from being rejected in favor of the mayor? Hannah must follow all the clues—while working through her own complicated feelings regarding her late husband and the living men she still cares for—in order to clear her sister’s name.

I found this latest case a puzzler until quite late in the book when I said aloud, “Oh no!” as I realized why the mayor had been murdered and most likely by whom. I also appreciated Hannah’s thoughts as she mulled over how the fallout from her unhappy relationship with Ross made her too scared to move on—though clearly if she does, she ought to move on with Norman, who is the best person on the planet.

I wasn’t too thrilled, however, by the casual way everyone treated Andrea striking a person so hard she knocked him out of his chair. There are certainly occasions where physical violence is warranted—had he himself gotten physical with her, for example, or if he’d encroached on her personal space and was not put off by verbal warnings—but losing her temper at insults as to her intelligence hardly cross the necessary threshold, in my opinion. Otherwise, another decent installment of the series that fans will eat up like one of the many Easter-themed delights described within.

There were well over 20 recipes included, and while I was quite tempted by most of the baked goods, I ultimately decided to make a dinner dish, lightly edited here for space. 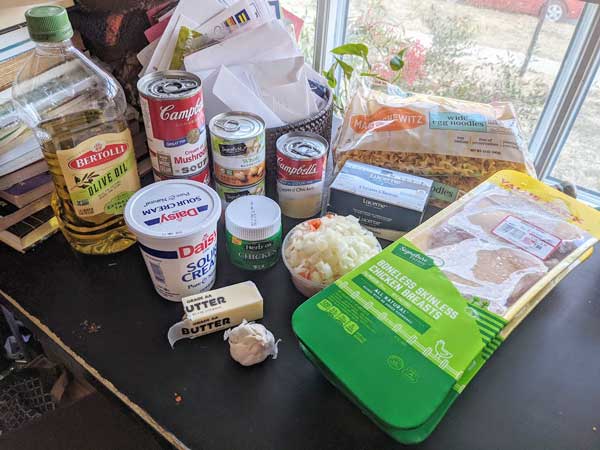 2 cans cream of mushroom soup undiluted (one can is 10.5 ounces net weight)

1 can cream of chicken soup undiluted (one can is 10.5 ounces net weight)

2 cans mushrooms, undrained (stems and pieces will do just fine–4 ounces each can)

Salt and black pepper to taste

Spray the inside of a 5-quart slow cooker with Pam or another nonstick cooking spray.

Place the minced onions in the bottom of your prepared slow cooker crock. 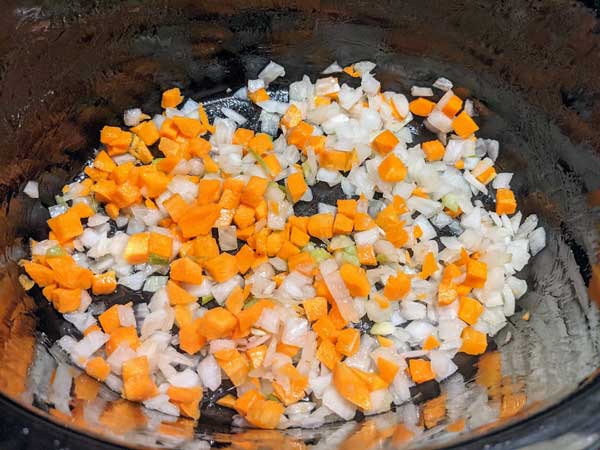 Place the chicken breasts on top of the onions. 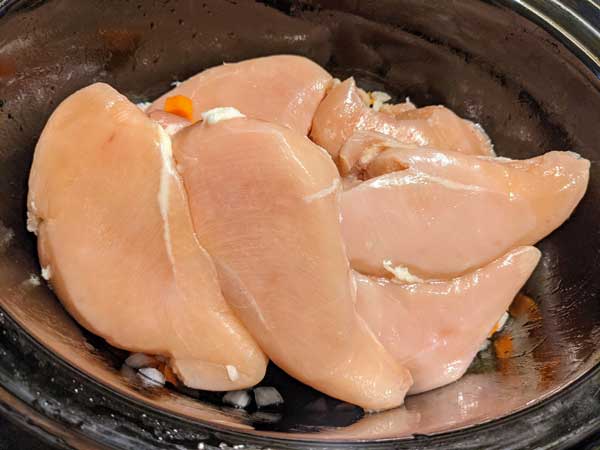 Place the soups in a large bowl and stir them together. 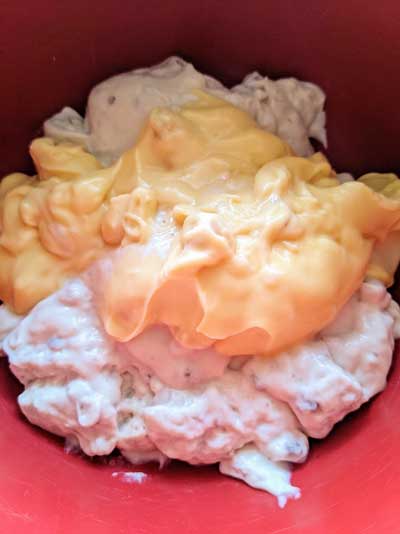 Open the cans of mushrooms, but don’t drain them. Stir the mushrooms and liquid into the bowl with the soup. 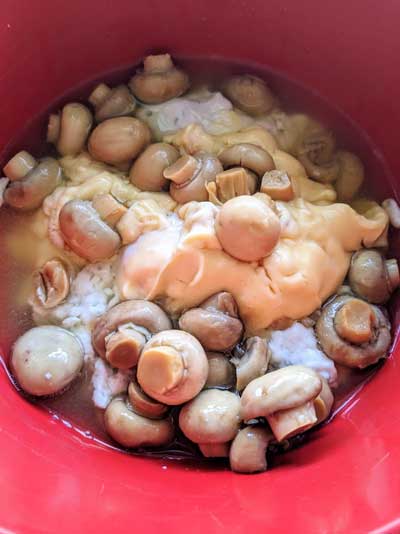 Cover the chicken with the soup and mushroom mixture. 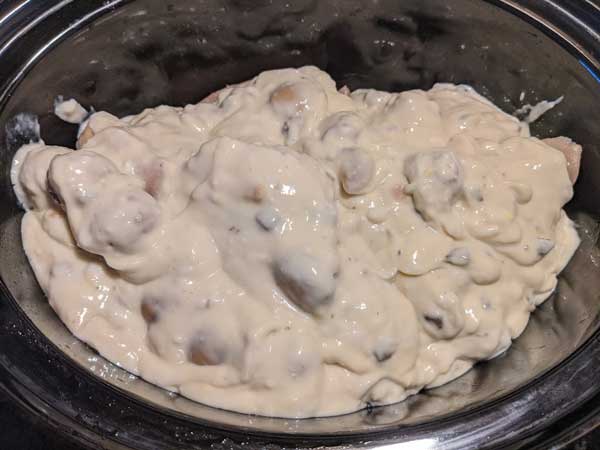 For the slow cooker: Cook on LOW for 5 hours. This dish will hold for up to 9 hours on LOW. 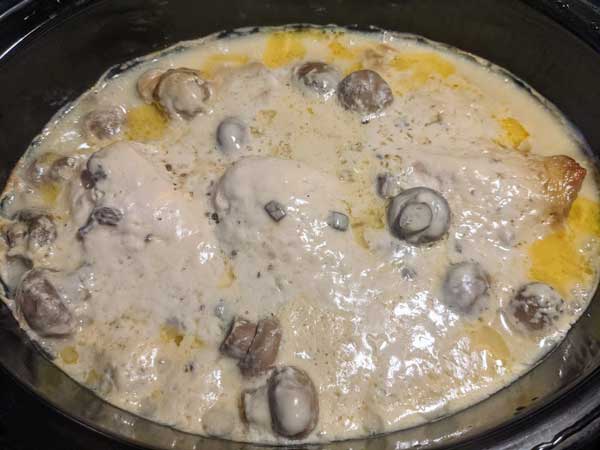 Place the chicken pieces back in the slow cooker. 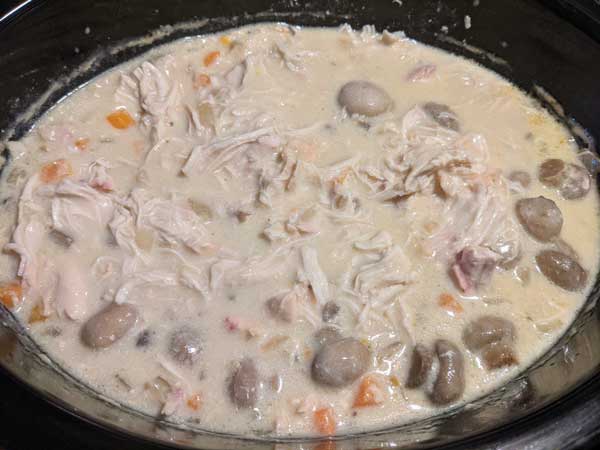 Add the crushed or minced garlic and the cup of sour cream. 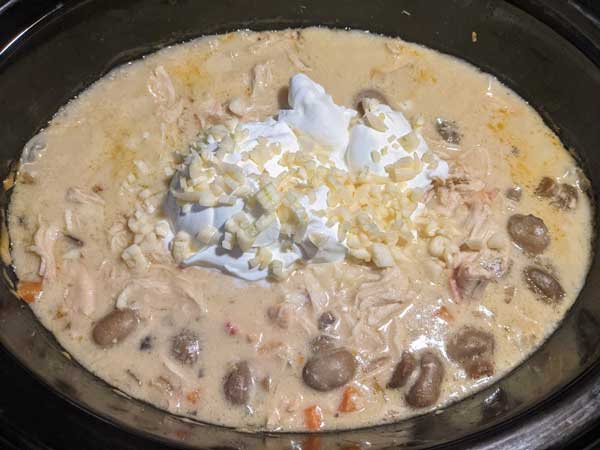 Cut the 8-ounce brick of cream cheese into 8 pieces. Place the pieces in a small microwave-safe bowl and microwave them on HIGH for 1 minute. Then let the bowl sit in the microwave for an additional minute.

Stir the pieces of cream cheese smooth and add them to the crock of your slow cooker. 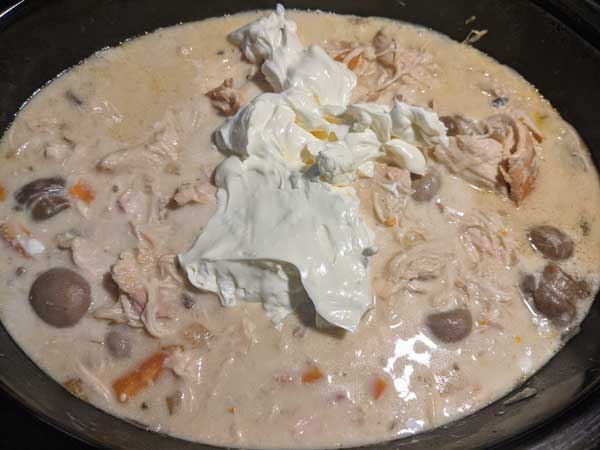 Mix everything together and put the lid back on the crockpot. Then turn the slow cooker up to HIGH. Your Stroganoff Light will need to cook for another 30 minutes. 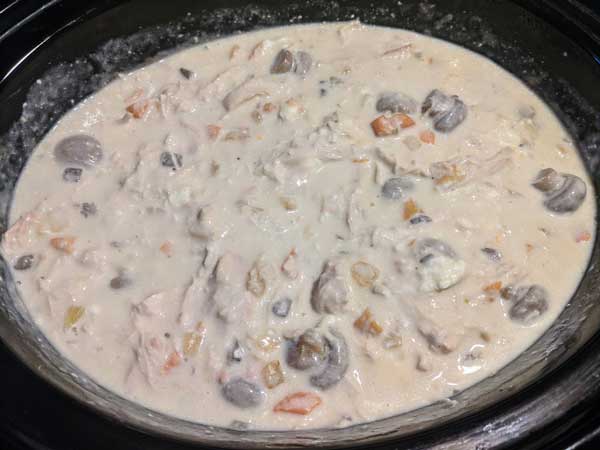 While you’re waiting for your main dish to finish cooking, find a pot large enough to hold the water for your package of noodles.

Place the required amount of water in the cooking pot.

Add a teaspoon of vegetable or olive oil to the pot.

Add 2 chicken bouillon cubes, center the pot on a stovetop burner, and turn the burner on HIGH heat.

Once the water heats to the boil, stir the water again to mix up the chicken bouillon, and cook the noodles according to the package directions.

Once the noodles have cooked, drain them in a colander or a large strainer, in the sink.

Cover the cooking pot and set it on a cold stovetop burner. Stir the noodles to coat them with the butter.

When the Stroganoff Light has finished cooking, add the salt and pepper to taste and give it a final stir. You may add hot sauce at this point. 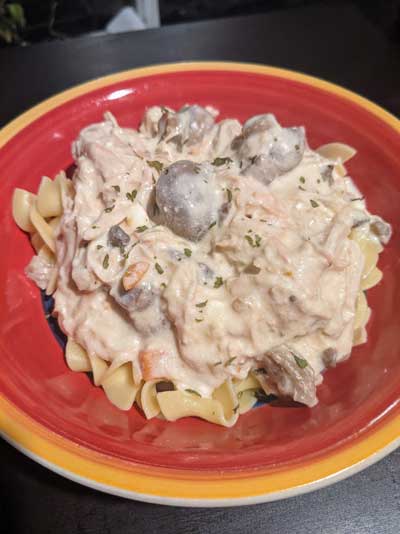 This stroganoff is only light in that it uses chicken instead of beef, but I suppose one can cut calories wherever one may! I actually sent my husband to the store to get pre-chopped onions, but since the only ones he could find came in a mirepoix, I threw the carrots in as well to add to the nutritional value of the dish (I had to remove as much celery as I could though because of my husband’s aversion). Since I had this cooking on low for eight hours, the chicken came apart in the crock with just a fork, which makes this already easy recipe even easier.

This yummy, hearty meal feeds a crowd and reheats nicely as leftovers. As always, I appreciate Ms. Fluke’s dedication to breaking down each step so that novice cooks are guided throughout the process—even as a decent home cook who isn’t averse to improvisation myself, I very much agree with her philosophy regarding clear instructions to help avoid mishaps.

Next week, we head to the East Coast for the follow-up to one of my favorite culinary cozy series debuts of last year and cook up a decadent Mediterranean dessert while investigating a drowning. Do join me!

See also: Cooking the Books: A Side of Murder by Amy Pershing