Abigail Beanblossom is part-owner of Beanblossom’s Tea and Tarot, a teashop that also provides Tarot reading services overseen by her business partner, Hyperion Night. But as this second novel in the series opens, she’s in a different sort of partnership with her former boss turned best friend, Razzzor, who’s enlisted her help in staking out a beverage company that he believes is selling counterfeit bottles of his vineyard’s wine. Razzzor retired from the tech company that made his (and to a lesser extent Abigail’s) fortune and now dabbles in various enterprises, including wine-making. What he hasn’t been as successful in is expanding his social or trust circles—hence the need for his former assistant to tag along as he investigates.

Not that Abigail minds; she has a little bit of experience solving mysteries, and it’s nice to spend time with her best friend in real life instead of just playing video games together online. She is, however, a little perturbed by her uncanny resemblance to a woman who enters and exits the Wine Merchants that they’re staking out, whom Razzzor later admits is his most recent ex, Deva Belvin. She’s even more perturbed when she and Razzzor finally go in to confront the shop owner, Whitmore Carson, only to discover him dead on his office floor.

In life, Whitmore had seemed to be your average businessman—if one with a slightly more complicated love life than usual. He had been dating Deva, though whether or not he had actually moved on from his exes before her was something of a gray area. This is, unfortunately, a trait he shares with Razzzor, who is accused first of stalking Deva, then of murdering Whitmore. Abigail must jump into action to help clear Razzzor’s name, but how far will she be willing to go in the name of friendship?

This was a great follow-up to the first Tea and Tarot Mystery novel, Steeped in Murder, as Abigail gets into the groove of running her shop while helping out her best friend and dealing with her impossibly gorgeous neighbor Brik. I kept willing her to not let the fact that she lives next door to Brik stop them from dating; it’s not like they live together, and his loud parties will be just as obnoxious whether they’re together or apart. The contemporary tone and witty banter that were a highlight of the first book were also here in full force, as was an intriguing murder mystery that certainly had me guessing.

As with the first book, there were recipes included, this time for three teas and this delicious accompaniment: 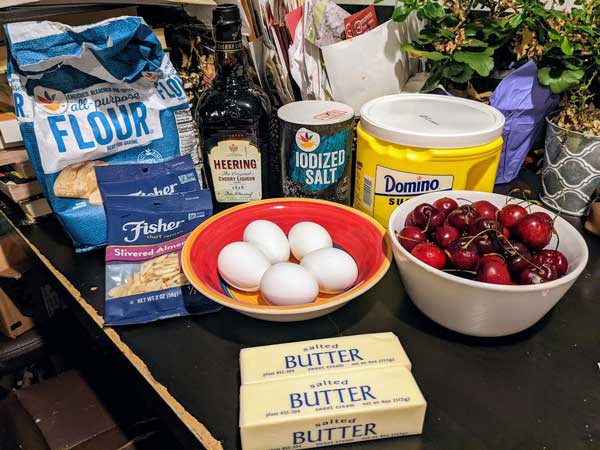 Melt the butter in a pan over medium-high heat. When the butter begins to bubble and pop, reduce the heat to medium. Continue to heat the butter, swirling the pan every now and then, until the butter is lightly browned. Remove the pan from the heat. 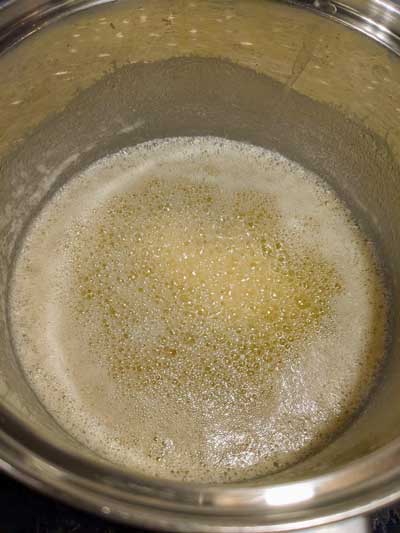 In a medium bowl, mix flour, ground almonds, sugar, and salt. Add the egg whites and whisk until the mixture is smooth. Stir in the kirsch. Add the melted butter but be sure to leave any dark-brown grit in the pan. Whisk mixture to combine. Let the mixture stand for 20 minutes.

Pour 1 T batter into each muffin cup (this should roughly half-fill the cups.) Push a pitted sweet cherry into each cup.

Using the back of a teaspoon, cover the cherries by smoothing the batter over them.

Bake 12-15 minutes, or until cakes are golden brown and a toothpick poked into one of the cakes comes out clean.

Allow cakes to cool for 10 minutes.

Run a knife around the edges of each mini tea cake to loosen them and remove them from the cups. 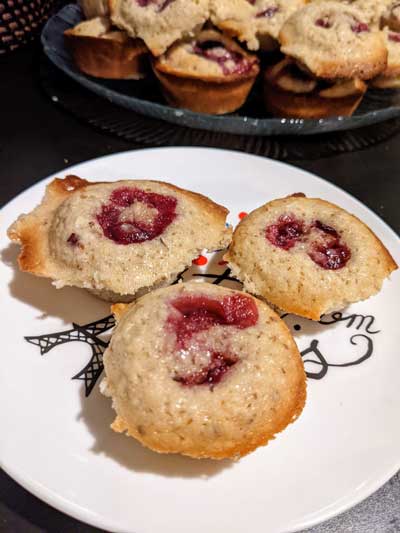 I admittedly dragged my feet on getting around to baking this because I had to grind my own almonds after only finding slivered at the grocery store. Grinding was actually super easy: just pop the slivered almonds into a food processor and pulse until ground. So I was totally kicking myself for procrastinating when I finally got to taste the end product and found it completely swoon-worthy!

My mini-muffin tin makes 24 instead of the 15 listed in the recipe, so it probably should not have surprised me that putting a tablespoon of batter in each cup totally made for overflow when the cherry was added. After filling the 24 molds here, I actually used a regular muffin tin for the rest of the batter, putting 2 cherries into each partly-filled cup. Presentation-wise, the larger teacakes came out much more attractive, but the bonus of trimming the smaller ones for a cleaner presentation means lots of deliciously crispy scraps to snack on (or you can just be efficient like me and leave the squared edges on, which makes up in deliciousness for any lack of aesthetic beauty). The contrast between the crispy/chewy edges, fluffy cake, and fresh cherry was absolutely out of this world. This was such a great, unusual tea cake that I’m very much looking forward to making again and again.

Next week, we stick around in San Borromeo to investigate a murder in the town’s upper crust, while baking another yummy treat. Do join me!