Sally Solari thinks she’s recovering just fine from a mild sinus infection when she receives a rude shock: she can’t smell a thing and, as a result, can’t taste a thing either. Her doctor assures her that there’s nothing to do but wait for her nerve endings to regenerate, a process that could take mere days, perhaps weeks, or unthinkably, might never happen at all.

It’s bad enough that this seriously affects her livelihood as the owner and chef of Gauguin, an upscale restaurant in her California hometown. More pressing is the fact that she’s about to participate in an artichoke-themed cook-off on the very day she discovers her new disability. Determined to grin and bear it, she moves forward with making her entry, masking her inability to smell with deflection and banter—particularly in her gentle rivalry with her competitive dad, Mario, a fellow chef and owner of the namesake Solari restaurant.

Alas, even worse things are in store for Sally when the cook at the table next to hers, Neil Lerici, is discovered dead in a nearby alleyway with an artichoke stuffed into his mouth. Neil was the younger brother of her high school friend Grace, with whom Sally has recently reconnected. While Sally instinctively reaches out to console her old friend, she also can’t help but snoop a little, with the tacit approval of her almost-boyfriend, police detective Martin Vargas.

But when Sally goes too far in investigating the Lerici family, everything threatens to literally blow up in her face. With both Grace and Martin mad at her and a killer lurking in the wings, will Sally realize that sticking her nose in where it doesn’t belong is doubly dangerous when she can’t rely on it to sniff out the truth?

I’ve really enjoyed how the five books in this series so far have each been loosely themed on a sense, with this installment being, of course, about the sense of smell. Leslie Karst writes well about this affliction, neither overdramatizing nor underplaying its effect on our heroine as she investigates Neil’s death. The murder mystery was also well done, with clues sown subtly throughout the narrative before the big reveal.

There were five delicious recipes included, and I decided to try out the soup Mario entered into the cook-off.

Artichoke Soup with Potatoes and Cream

¾ lb. Yukon gold or other yellow potatoes (about 6 smallish ones)

5/6 artichoke heart pieces, reserved from can or jar

Peel the potatoes and cut them into ½ inch pieces. Heat the oil in a large saucepan over moderate heat until shimmering, then add the potatoes. Peel, then cut the shallots and garlic in half, and add them to the pan. Saute the vegetables over medium heat, stirring occasionally, until they start to brown – about 5 minutes. Drain the artichoke heart pieces, set aside five or six for the garnish, and add the rest to the pan.

Sprinkle the vegetables with the herbes de Provence, then pour in the wine and simmer until the liquid has mostly cooked away – about 8 minutes. Add the chicken stock and cheese rinds and simmer, partly covered, until the vegetables are tender – about 20 minutes.

Let the vegetables and broth cool, then remove and discard the cheese rinds. Puree the soup with an immersion blender (or use a regular blender, working in batches, and pour back in the pan). Add the cream and the salt and pepper, and – if serving immediately – bring back up to a simmer over medium heat.

The soup can be prepared up to this point and refrigerated for a day (which is recommended, as it will help the flavors meld).

Squeeze the retained artichoke hearts dry with a cloth or paper towel, then slice lengthwise into thin strips.

Heat the olive oil in a skillet over moderate heat until shimmering, then scatter the artichoke strips into the hot oil. Stirring often, fry until crispy and golden brown, which will take only a minute or so. Watch them carefully, as they can quickly burn. Remove with a slotted spoon to a paper towel to drain, then sprinkle lightly with salt. 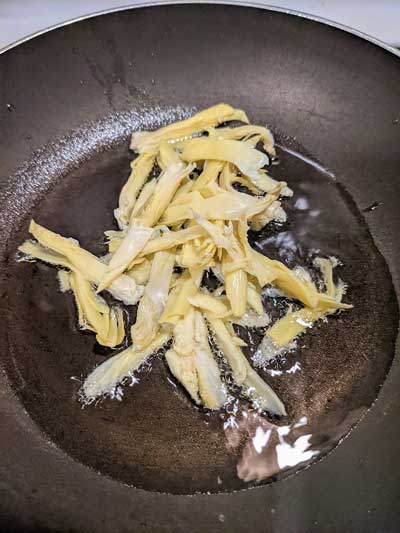 Reheat the soup, if necessary, then ladle into bowls and drizzle each with about a teaspoon of olive oil. Place a mound of shaved cheese in the middle of each bowl, then scatter the frizzled artichokes on top. 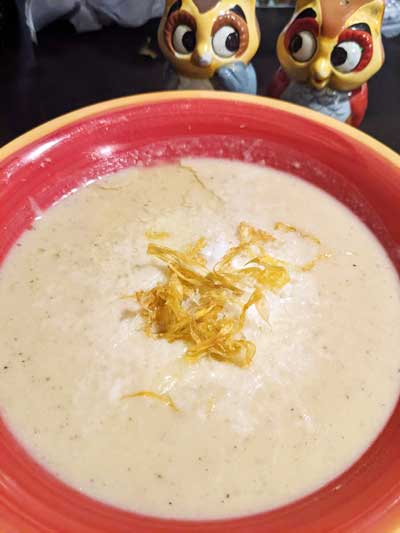 I love artichokes, and this was such a wonderful way to enjoy them! The only thing I’d do differently next time is to get slightly larger potatoes; my husband thought he was doing me a favor by getting me very small ones, which saves time on dicing as I usually don’t bother peeling potatoes. Not peeling the potatoes was not an option for this elegant recipe, though!

The resulting soup is wonderfully silky and flavorful. My husband actually finished all the leftovers the next day before I could get to any, and he is much pickier than I am about leftovers. This is a rich, delicious soup to impress with, and it honestly isn’t too difficult to prepare—although, for some weird reason, it took me a lot longer to frizzle my artichokes than expected.

Next week, we travel to the Midwest for a series debut, whipping up a pizza-esque dish while investigating a murder. Do join me!

See also: Cooking the Books: A Dark and Stormy Tea by Laura Childs