The fog is rolling in on Charleston, South Carolina, on the fateful evening that Theodosia Browning decides to take a shortcut while walking to the tea shop she owns. Her path leads her through St. Philip’s Graveyard—the kind of place guaranteed to spook the faint of heart—but Theo, fortunately, doesn’t believe in ghostly menaces. Unfortunately, it’s a very flesh-and-blood threat she stumbles across and, worse, witnesses in action, despite her best efforts to thwart the shadowy killer’s grisly crime.

To add to the horror of the evening, Theo realizes that the murder victim is someone she knows. Cara Chamberlain is, or rather was, the college-aged daughter of local bookstore owner Lois. Smart and ambitious, Cara had been interning for local news station Channel 8 at the time of her demise. Lois confides in Theo that Cara had been researching the cold case murders attributed to a serial killer whom the local media dubbed Fogheel Jack, in hopes of impressing her bosses with what new angles and insights she could bring to bear on the topic. Had she somehow gotten too close to the truth, prompting the killer to resurface after seven long years in order to get rid of a plucky young investigator? Or is a copycat using the modus operandi of a long-gone bogeyman to obscure the real motives behind his spree?

As the body count rises and other shocking acts of violence rock Charleston’s Historic District, Theo finds herself increasingly involved in the investigations. After all, how can she say no to the pleas of a distraught Lois, who wants her to do whatever she can to make sure that Cara’s killer is brought to justice? But as the fog descends on their beloved city, will Theo find herself the next victim of a devious mind hiding out in plain sight?

This 24th installment of the long-running series finds Theo up to her usual mischief, ably assisted by her long-suffering tea sommelier, Drayton Conneley. Her outsize sense of curiosity lands her in hot water more often than not, as she meddles and snoops her way into the crosshairs of a killer. It makes for entertaining reading overall, though I wish we’d gotten a little more closure on the fire and on the events of seven years prior. Series fans will find much to love, however, in this culinary cozy series that makes the most of both its beautiful setting and the wonderful tea services Theo and co put on at her Indigo Tea Shop. I was especially intrigued by the Murder Mystery Tea she served and greatly appreciated the many tips included in the back of the book for hosting this and other themed events.

There were also 14 recipes included, all for the delicious dishes described in the narrative. I decided to try out this relatively simple one:

Yields 4 to 6 side servings. (Note: This is an excellent accompaniment to tea sandwiches as well.) 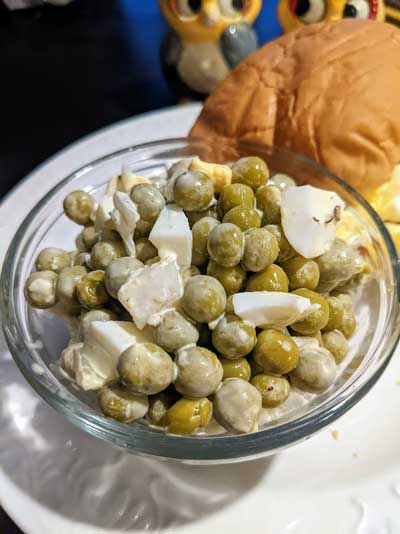 Honestly, this side salad has no business being as delicious as it is! I judiciously seasoned my dish with salt and pepper and found that those most basic of seasonings provided the perfect counterpoints for the sweet softness of the peas and the tangy crunch of the diced onions. The egg and mayonnaise perfectly bind everything together for a side that’s packed with protein, vegetables, and flavor.

In addition to being incredibly tasty, this salad was also really quick to put together, especially if you’re using pre-cut onions and perfectly hard-boiled eggs from the grocery store as I did. If you’re suffering from the summer heat and want a quick, cool way to make something not too unhealthy, then this is definitely the side dish for you! And while I initially served this with a light (if not quite a tea) sandwich, I also admit to sneaking spoonfuls of the salad on its own later as a very satisfying snack.

Next week, we travel to the West Coast to check in with a sleuth we haven’t heard from in a few years, investigating a murder while enjoying a fantastic soup. Do join me!

See also: Cooking the Books: No Parm No Foul by Linda Reilly