Cooking the Books: Four Cuts Too Many by Debra H. Goldstein

Sarah Blair is waiting outside Carleton Junior Community College for Grace Winston, who’s both her friend and the sous chef at the restaurant she co-owns. Grace is teaching an introductory class on knife skills for the college’s culinary school, which shouldn’t be too taxing given both Grace’s skill and her desire to give back to her alma mater. So Sarah is completely taken aback when Grace comes down late, wild-eyed, and bloodied after her latest class.

Turns out that the extremely abrasive Dr. Douglas “Malevolent Monster” Martin, the culinary and hospitality departments’ interim chairman, had inserted himself into Grace’s class with near-disastrous results. In order to stop him from cutting a student, Grace had flung herself into harm’s way instead, resulting in a still seeping hand wound that Sarah is quick to help re-bandage. To add insult to injury, after Grace dismissed her class, Dr. Martin returned to her classroom not only to deride her teaching skills but also to chastise her for her personal life. Grace endured the tirade for as long as she could before stomping out to meet Sarah, hence her tardiness and lack of composure.

Once poor Grace has a chance to calm down, the two women take the stairs back up to collect the rest of her things from class. But a gathering of people in the hallway outside impedes their progress before word gets out that someone had finally had enough of the Malevolent Monster and used one of Grace’s knives to finish him off.

Grace immediately becomes the prime suspect. Sarah quickly contacts her boss, lawyer Harlan Endicott, before launching her own efforts to clear Grace’s name by finding the real murderer. After all, Grace could never be a killer—could she?

This fourth installment of the Sarah Blair Mystery series is as interesting for its murder mystery as it is for the ongoing developments in Sarah’s personal life. Her devotion not only to RahRah, her Siamese cat, and Fluffy, her foundling dog, but also to the animals of Wheaton, Alabama, is heart-warming, as are her continued efforts for the local no-kill shelter. Her love life takes an interesting turn in this book as well, as does her free-spirited mother Maybelle’s. The only thing I could really ask more of from this story is an explanation as to Kait’s cryptic utterances after the senior outing. Perhaps they’ll form the basis for a brand new mystery in the next novel?

There are three delicious recipes included, and since I’m very partial to picnic food, I decided to try out the first of them. 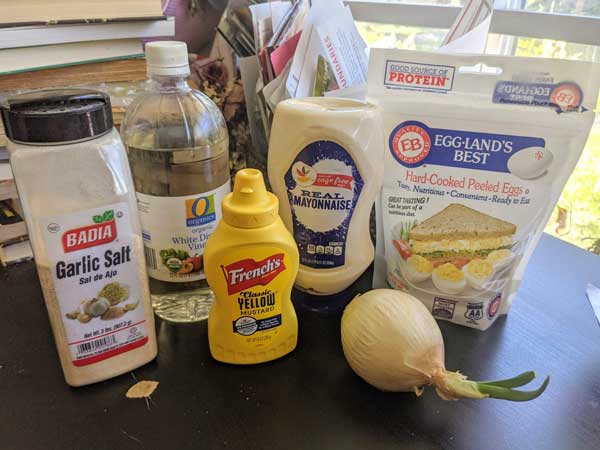 Peel the eggs and place them in the food processor. Pulse a few times, stopping when the eggs are finely chopped.

In a medium bowl, mix the other ingredients. Once they’re mixed well, add the chopped eggs and mix until just combined. Can be garnished with a touch of paprika. 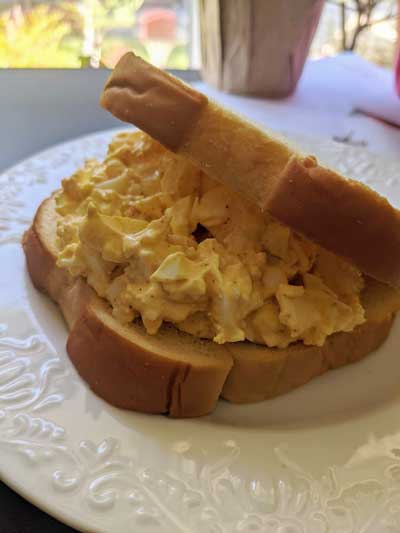 This was definitely a sophisticated-tasting, if easy to make, take on the traditional sandwich staple! I usually make a very simple version myself with eggs, mayonnaise, salt, pepper, and tarragon whenever I’m in the mood for a quick sandwich, so I was absolutely delighted to discover the complexity of flavors brought about by the combination of kitchen staples used in this recipe. My picky kids even ate a small sandwich of this each!

For convenience’s sake, I did use pre-boiled eggs, which are such a time-saver. I also admit to being a little worried that I was over-pulsing the eggs, so I probably stopped a little sooner than I should have. This was easy to fix, however; I just cut up any leftover large pieces while mixing the chopped eggs with the wet ingredients. Overall, this was a quick and delicious take on one of my favorite picnic foods.

Next week, we head northeast to whip up a healthy vegetable appetizer while investigating the death of an aging star. Do join me!

See also: Cooking the Books: Death on the Night of Lost Lizards by Julia Buckley