I genuinely did not expect to fall in love with a culinary cozy that features a prominent real-life politician as a detecting foil for its fictional heroine, but here I am now, totally besotted with this quirky little mystery!

Crash Robertson is a Vermont native who got the heck out of the Green Mountain State as soon as she possibly could. With her excellent grades and interest in public service, it’s no surprise that she’s found herself enrolled in her second year of postgraduate work in Georgetown University’s political science program as the novel begins. As part of her coursework, she has to complete a semester-long congressional internship and has her sights set on joining Senator Bernie Sanders’s office. This isn’t just because of her Vermont roots, though she’s hoping that that will give her an in with the senator. The Sanders office actually pays its interns a living wage, which is only one reason it’s one of the more competitive and thus prestigious internships around.

Despite a less-than-stellar interview, she lands the job. Interning for a senator isn’t as glamorous as she’d thought, however, as she finds herself saddled with all the boring minutiae of helping to run a congressional office during a campaigning off-year. This changes when a wave of food poisoning takes out the district office overseeing Crash’s hometown of Eagle Creek, right as Bernie is scheduled to preside over the town’s Champ Days festivities. Bernie’s chief-of-staff, Lana O’Malley, already has unbreakable plans of her own, so she reluctantly assigns Crash to serve as Bernie’s personal aide for the weekend-long visit.

Crash is both thrilled and terrified at the opportunity, especially since she hasn’t spent much valuable one-on-one time with the senator since that calamitous interview. It doesn’t help that she hasn’t really kept abreast of developments in her hometown either, so she finds herself often just as bemused as newcomer Bernie is as to what’s going on in Eagle Creek. Things take a sinister turn when a corpse is fished out of the waters of nearby Lake Champlain. The local sheriff’s office is happy to rule it an accidental drowning, but someone who clearly disagrees sends Bernie the autopsy report, which reveals that the dead man had drowned not in lake water but in large quantities of maple syrup.

While Crash would be more than happy to just keep her head down and let someone else handle this problem, Bernie’s social conscience won’t let the mystery go. As he and Crash look into the man’s death, they find themselves also investigating the local maple sugar industry, creepy tech billionaires, and rumors of elusive cryptids. This is not the political weekend Crash had in mind, but it might be even better as the down-to-earth (and surprisingly spry!) senator from Vermont teaches her a thing or two about championing the voiceless and relentlessly pursuing justice.

I am not a Bernie stan, but I deeply appreciated the amount of care and research that went into the construction of this hilarious, often thought-provoking book. Bernie Sanders makes for a terrific sleuth, as Andrew Shaffer weaves the real person’s actual platforms, policies, and speeches into the cozy mystery proceedings. I am eagerly awaiting the sequel and highly recommend this as a fun holiday gift for the Bernie-lover in your life.

In addition to the fast-paced, entertaining mystery are 12 recipes for dishes mentioned in the novel itself. I’ve been craving chocolate recently, so decided to try out the recipe from the book within this book–fictional Bernie is apparently a big culinary cozy fan himself–lightly edited here for clarity.

If cannabis and its derivatives are not legal in your state, you can substitute regular unsalted butter in the same amount. 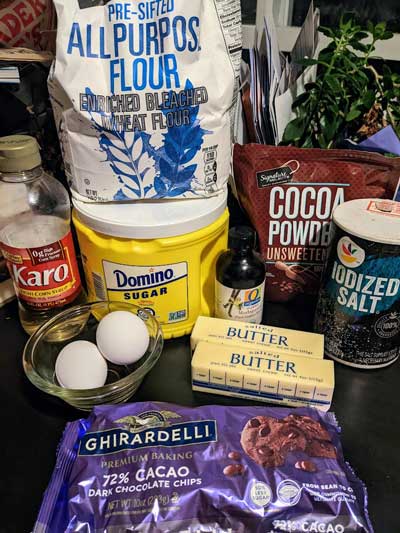 ⅓ cup natural cocoa powder, plus a sprinkling for the pan

Grease an 8-inch square baking pan with the unsalted butter, and then dust with the cocoa powder. Set aside.

In a heatproof bowl over a pot of water set to simmer (or microwave in 10-second intervals), melt the cannabutter and chocolate. Remove the bowl from the heat. Add the sugar, corn syrup, vanilla, and salt.

Add the eggs one at a time, mixing well after each addition. Beat until a ribbon that lasts about 5 seconds forms on the top of the batter when you lift the whisk, about 5 minutes.

In a separate bowl, sift or whisk the flour with the cocoa powder, and then add it to the melted chocolate mixture. Stir just until the flour disappears (don’t over mix). Stir in the chopped walnuts (if desired). 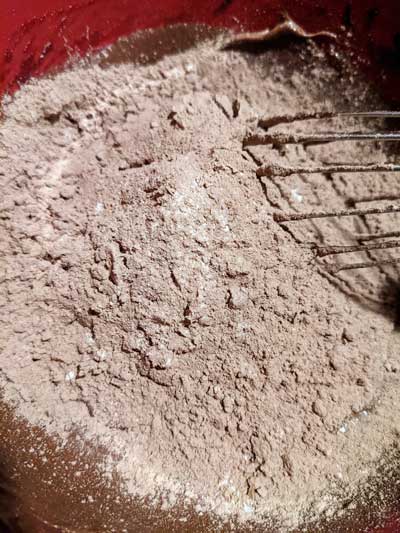 Pour the batter into the prepared pan and place it in the center of the oven and bake until a glossy top forms and starts to crack, about 25 minutes.

Let the brownies cool on a wire rack for at least 10 minutes before cutting. 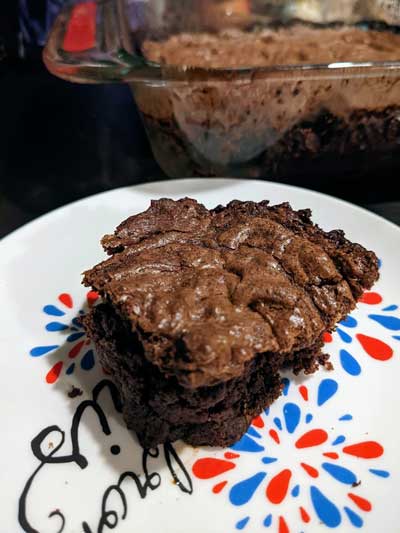 I made this with regular butter and no walnuts and was actually surprised by how light it tasted, given its use of dark chocolate throughout. Interestingly, I thought it was less sugary than salty, even for someone who tends to use salted butter for all my baking (I just skip adding any extra salt when the recipe calls for it). I did think the use of two tablespoons of butter to grease the pan was excessive, though I liked the idea of dusting that butter with cocoa powder. Perhaps the ingredients meld better with the introduction of cannabutter, but as a regular brownie recipe, it was fine if nothing to write home about. Let me know your thoughts if you try it out either way.

Next week, we travel to the West Coast to bake up another unusual treat while investigating the murder of a bakery regular. Do join me!