Cooking the Books: Dying for Strawberries by Sharon Farrow 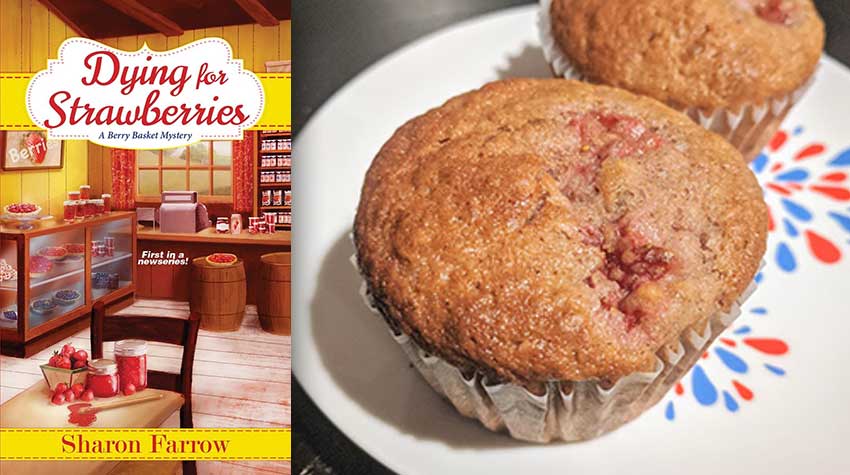 After enjoying the latest two of Sharon Farrow’s terrific Berry Basket Mystery series, I decided to go back to the beginning and see where it all started for Marlee Jacob and her eclectic crew of family and friends. As Dying for Strawberries begins, town booster Piper Lyall-Pierce is busy, as usual, organizing a festival to promote her family’s ancestral hometown of Oriole Point. The Strawberry Moon Festival is meant to showcase the region’s berry harvest, and as the proprietor of the town’s Berry Basket store—selling all things berry-related—Marlee is heavily involved with both this and other Chamber of Commerce activities.

What Marlee wishes she was less involved with is her good friend Natasha’s marriage. Natasha is a former beauty queen married to the much richer, much older, much nastier Cole Bowman. After he gets publicly violent with Natasha, Marlee begs her friend to leave him, but Natasha seems unconcerned.

Then, Cole drops a bombshell on the town’s business owners: he’s purchased a sizeable tract of land that he plans on developing in a way that will most likely destroy both Oriole Point’s small-town charm as well as the profitability of the town’s many small businesses. Given Marlee’s meddling with his marriage, he’s also exceedingly pleased to inform her that he now owns the Berry Basket’s lease and won’t be renewing it when it ends in the near future.

As if this wasn’t enough for Marlee to deal with, Natasha abruptly disappears. The police don’t seem to care, so Marlee decides to sneak into the Bowman mansion in order to find some clues as to where Natasha might have gone or, worst-case scenario, proof that Cole did something unthinkable.

Marlee is in for the shock of her life when she finds Cole’s dead body instead. Unsurprisingly, she immediately comes under suspicion for his murder. Now, in addition to having to find her friend, she’ll have to clear her name and figure out whodunit before the real killer strikes again.

There is so much plot in this book that my little summary barely covers all the machinations and mayhem as Marlee maneuvers around her Michigan town, digging into people’s pasts even as a figure from her own past rears a metaphorically ugly head. Knowing where the series goes from here, it was really good to get acquainted with the basics and then some in this fast-paced, thoroughly engrossing debut.

I was also quite excited about the four strawberry-related recipes included—especially this one, which I decided to try out for the column: 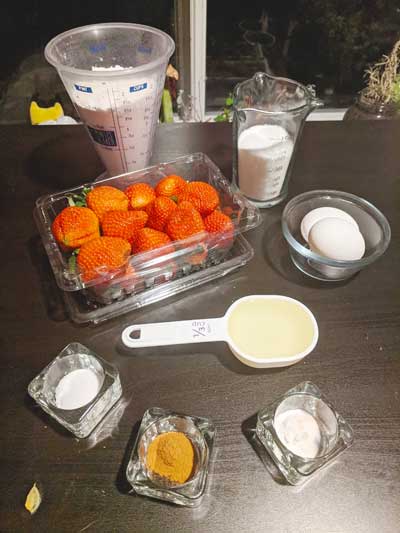 Preheat the oven to 450°F. Line the cups of a 12-cup muffin tin with paper cups or grease the cups.

Smash the strawberries in a large bowl with a fork. Stir in the sugar, oil, and eggs and mix well.

Next, add the flour, baking soda, salt, and cinnamon and mix until moistened.

Spoon the batter into the prepared muffin cups. Bake for 15 to 18 minutes, or until the muffins are light golden brown or a toothpick inserted in the center of one comes out clean. 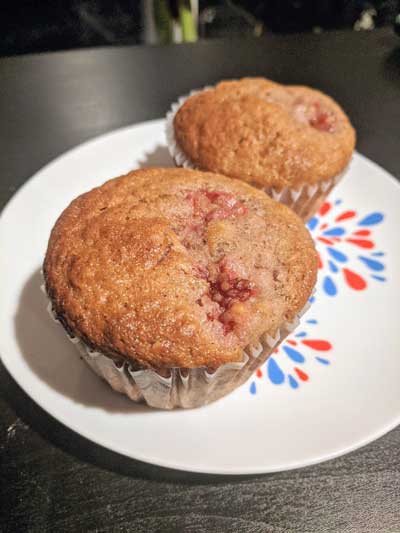 I love when a baked good truly showcases its fresh ingredients, in this case, the smashed strawberries that lend moistness and flavor to this delicious, portable treat. Ms. Farrow also notes that each muffin has less than 180 calories, making them healthy—or at least guilt-free—as well! They’re a quick and easy treat to whip up the next time you have strawberries to hand, and I thought they were absolutely delectable, perfectly balancing the fresh fruit and yummy muffin flavors.

Next week, we’ll be staying in Oriole Point to see what Marlee and crew get up to next while trying a savory blackberry dish. Do join me!

See also: Cooking the Books: The Dog Who Knew Too Much by Krista Davis