Cooking the Books: Deck the Donuts by Ginger Bolton

Donut-maker Emily Westhill is looking forward to a white Christmas, especially if it means extra ski time with police detective Brent Nyce at the chalet home he’s just bought a short way outside of their town of Fallingbrook, Wisconsin. Of course, ski time isn’t the only kind of time she’s looking forward to spending with the handsome older man. Seven years ago, the death of her husband—who was also Brent’s best friend and partner—tore the two then-friends apart. Reconnecting has brought its fair share of pain, but something tender and new is growing between them, and Emily thinks she might be ready to take the next step in embracing her future.

An emergency call while they’re wrapping up a skiing run, however, has them focusing on a more immediate concern: dashing to the aid of a tour bus that has driven off the road. Tour guide Paige Usinor insists that the steering wheel somehow snapped under the hands of driver Travis Tarriston, but unhappy passenger comments and the evidence of Brent and Emily’s own noses indicate that alcohol likely played a part in the proceedings. Travis himself seems to be the person most badly injured, necessitating admission to the Fallingbrook hospital. While the rest of the people on the tour bus suffered less severely, they’re almost all stranded while they try to reach the tour company in order to get transport back to Green Bay.

Of course, the residents of Emily’s small town spring into action, opening their homes and wallets to help house, feed, and entertain the many families on the bus while they arrange transportation home. Emily herself takes in a very shaken Paige, who is as concerned with Travis’s well-being as she is with hiding from the understandably angry tour bus group. Paige confides in Emily that she hadn’t wanted him to come back to a town with which he’d had such a contentious past—a past that turns into a murderous present when Travis is found dead under an ice sculpture, still dressed in his hospital gown, the next day.

While Emily is certain that Brent will be able to solve the case, she can’t resist getting involved—especially when Paige herself is a suspect in Travis’s murder. Emily likes her new lodger, who seems particularly sweet and considerate, but as the evidence begins mounting against Paige, Emily can’t help but wonder if she’s opened her home to a devious killer. It will take Brent and Emily’s combined efforts to sort out the truth and apprehend a murderer, even as they reevaluate their own relationship and a possible future together.

Readers, I cheered at the last lines of this book. This series has really put the “slow” back into slow-burn romance, but I appreciate how Ginger Bolton has made me really care about these characters and their happiness together. She also does a fine job of laying down her plot and obscuring whodunnit, like a covering veil of the Wisconsin snow she writes about here. Deck the Donuts is a can’t miss for series fans or even for more casual readers who enjoy romance with their cozy mysteries.

There were two donut recipes included, and I decided to try out this one: 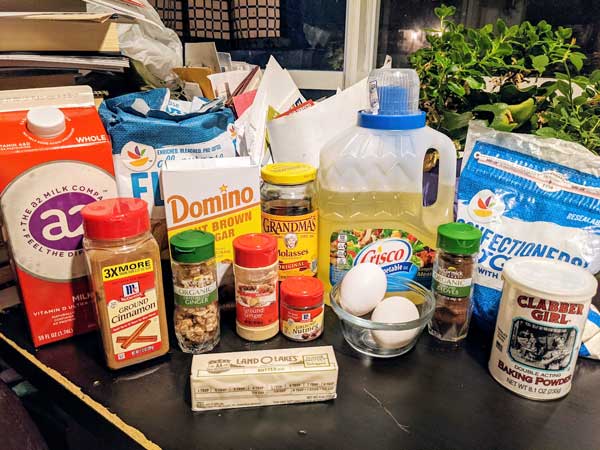 In another bowl, mix the egg, molasses, milk, brown sugar, and melted butter. Stir wet ingredients in dry ingredients until blended. If necessary, add flour by tablespoonfuls until dough is just barely firm enough to handle. Do not overmix. Wrap in plastic wrap and chill several hours or overnight.

Roll dough to ½ inch thick. Cut with donut cutter or one large round cutter with a smaller round cutter to make a hole in the center. Cover with damp cloth and allow to rest for ½ hour.

Heat oil to 360°F. Gently slip the donuts and donut holes, a few at a time, into hot oil. Do not overcrowd. Cook for about two minutes until puffed and browning, turn, and cook for about one minute. Lift and drain on paper towels.

When cool, sprinkle with confectioners’ or granulated sugar if desired. 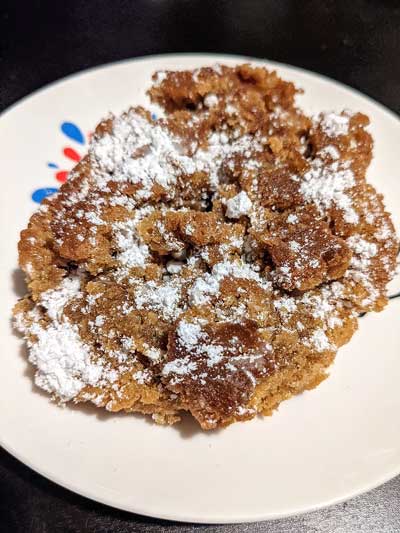 As you can see from the pictures, this did not come out anywhere close to what I imagined! This was actually my first attempt at frying donuts from this series’ recipes; I’d only ever baked them before, though I have fried biscuit-can donuts successfully. The flavors of these were good, as everyone in my roleplaying group commented when I brought these over for feedback, but my chef friend Laura had a lot of very useful tips for making a far more donut-like batch the next time I try these. She insists that I should be resting the donuts once I’ve cut them out for at least two hours and using a slightly higher temperature and slightly longer cook time. Hopefully, this advice will help me make better donuts the next time around!

Next week, we travel back east for a family reunion gone murderously awry while making yet another seafood pasta (I can’t help it, I love the stuff!). Do join me!

See also: Cooking the Books: An Eggnog to Die For by Amy Pershing