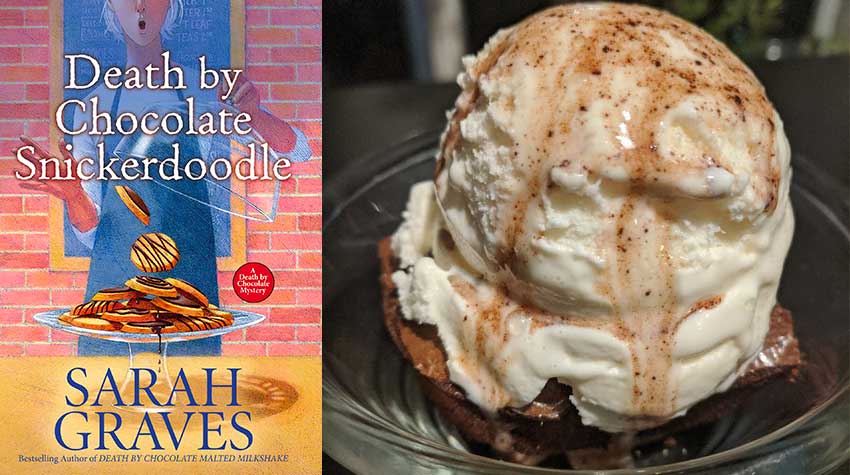 As the proprietors of the Chocolate Moose—the best and only chocolate bakery in Eastport, Maine—Jake Tiptree and Ellie White are expected to enter and make a good showing in the town’s annual cookie baking contest. But the murder of local curmudgeon Alvin Carter proves a puzzle our two inveterate snoops cannot resist—especially when they have an interest in the man accused of killing Alvin: Billy Breyer. Jake’s son Sam relies on Billy to help keep his landscaping business running, while Ellie is actively involved in the welfare of Billy’s younger sisters, Helen and Anne, who often stop by the Chocolate Moose to do their homework between school and shifts on lobster boats. The Breyer girls dream of saving up enough money to afford a boat of their own, but Billy’s arrest means that their only other adult relative, Prunia Deveraux, has carte blanche to step in and order the girls around, forcing them to be the proper young misses she imagines they should be.

With all this as motivation, Jake and Ellie decide to give Jake’s daughter-in-law Mika the chance to work herself out of her mommy-brain fug by taking over cookie contest responsibilities. Now free to indulge in questionably legal investigative antics, our intrepid duo digs into Alvin’s life and death while dodging the local police chief, the disapproving but overall friendly Bob Arnold. Trouble is all the evidence they find points squarely at Billy’s guilt. With dry season wildfires looming in the background as well as ongoing concerns as to the wellbeing of their extended clans, how far are Jake and Ellie willing to go to ensure that justice is served for Alvin and Billy both?

This was another surprisingly wild ride of a culinary cozy here in the Death by Chocolate Mystery series. Jake and Ellie’s scrapes are by turns hilarious and exceedingly dangerous, especially when they’re trying to outrun Mother Nature. The mystery was well-crafted, with layers that deftly obscured whodunnit so that I kept second-guessing myself until near the very end. But the greatest strength of this novel is in the enormous heart shown to its cast of characters and especially to the impoverished and infirm. The threat of penury—of being sick and old and homeless—looms realistically large for far too many people in this novel, a heartbreaking commentary on life in one of the wealthiest nations in the world.

There was only one recipe included, but it’s a multipurpose treat. 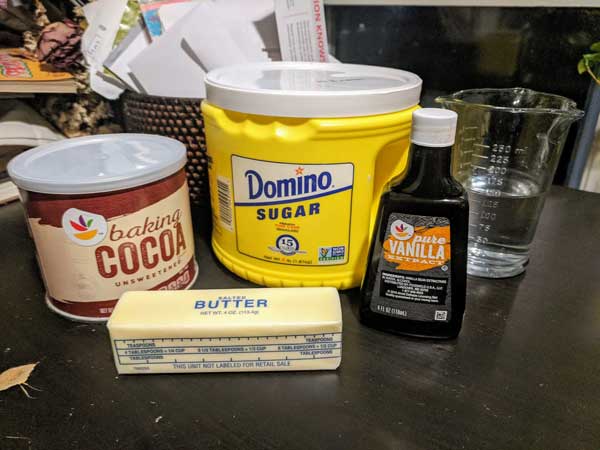 Melt together two tablespoons of butter and two ounces of unsweetened chocolate in the top of a double boiler or in a saucepan over very low heat. Stir in a cup of sugar and half a cup of water. Add half a teaspoon of vanilla extract and continue stirring over low heat until the sauce thickens.

And that’s it. You can spoon some of this chocolate sauce over a scoop of vanilla ice cream as soon as it’s done, just to make sure it turned out okay. 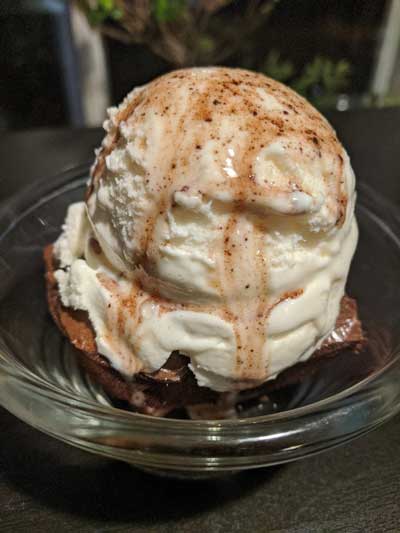 It’s all pantry staples, which makes this sauce pretty easy to pull together. However, I wasn’t sure how much time I was meant to leave the sauce to thicken and probably took it off too early to decorate the brownie sundaes my kids were clamoring for. It was very delicious, despite looking quite grainy still after about 15 minutes of thickening over low heat. I actually left the sauce on the stovetop for 30 minutes more before turning the burner off to let it cool. Once at room temperature, I poured the sauce into a nice glass container and stored it in the fridge. Having used it several times since then, I can attest to the texture of the sauce being as thick and rich as any store-bought kind!

Next week, we go all the way cross-country to the Pacific Northwest to try a breakfast treat that pairs perfectly with the sauce we just made here while investigating a dreadful murder. Do join me!

See also: Cooking the Books: Murder at the Beacon Bakeshop by Darci Hannah