It’s been a month since Berry Basket store owner Marlee Jacob brought a killer to justice, and she’s ready to put the whole thing behind her as she and her friends look forward to a summer of fun. The nearby Blackberry Art School is hosting its centenary and has invited all its previous students from far and wide to participate in the festivities. Marlee, who took classes there as a teenager with her best friend, Tess Nakamura, is excited to be reunited with old friends.

Town booster Piper Lyall-Pierce has naturally inserted herself into the proceedings, helping to organize the BAS events alongside Oriole Point’s Fourth of July celebrations. She’s also roped Marlee in to assist. Though Marlee is busy running her dedicated-to-everything-berry store, she doesn’t mind pitching in—especially when Piper runs into a crisis over finding an appropriate place to flag off the annual Blackberry Road Rally. Since the scavenger-hunt-style rally is one of Marlee’s favorite events, she’s happy to accompany Piper and her new Great Dane, Charlemagne, on a scouting expedition of likely outlying locations.

She’s less happy when Charlemagne takes off into the woods with her in tow. After leading her a merry chase, Charlemagne finally calms down—but only because he’s discovered a pile of bones to dig up. Marlee is shocked to see a human skull among the remains.

At first, the investigating officers are stumped as to who the skeleton could possibly belong to, but the Berry Basket’s reclusive baker, Theo Foster, is convinced he knows the answer. Back when he attended BAS as a teenaged student himself, albeit nearly a decade before Marlee had, a fellow attendee had gone missing. Sienna Katsaros was a gifted painter and a beautiful young woman. Her disappearance devastated her friends, especially after articles of her clothing washed up on the shores of nearby Lake Michigan. Everyone assumed she drowned, but her newly found skeleton puts the lie to that idea. Worse, the discovery suggests murder.

Theo begs Marlee to help him find out what happened to the young woman he loved. Despite her misgivings, Marlee agrees to meet with several of Sienna’s tight-knit circle from that long-ago summer. In the process, she draws the attention of a murderer who won’t hesitate to kill again.

This is such a terrific culinary cozy mystery series! If I had to pick one, I’d say that Blackberry Burial is probably the best of the series so far—though every other installment gives it a solid run for its money. Aside from the deftly plotted mysteries, the gradual development of the background and main romantic plot leave me both acutely impressed and eager to read what happens next.

The series also features some really great recipes. This installment has four that incorporate blackberries into them, and I decided to try out this savory one: 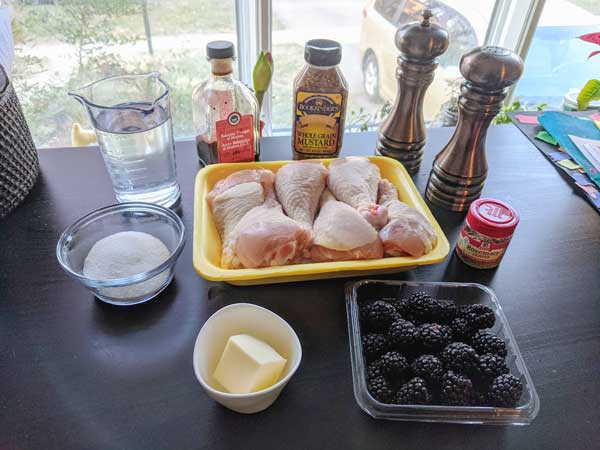 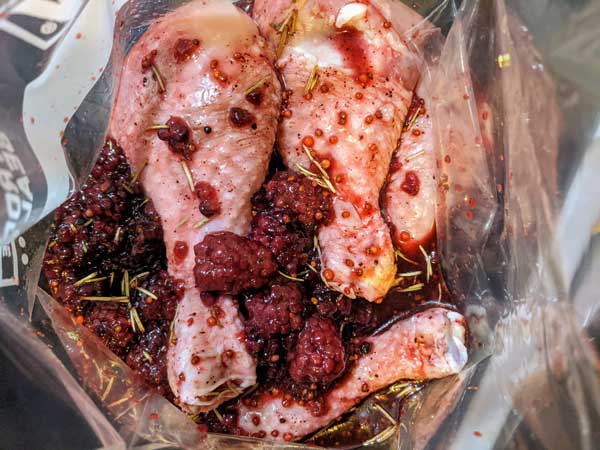 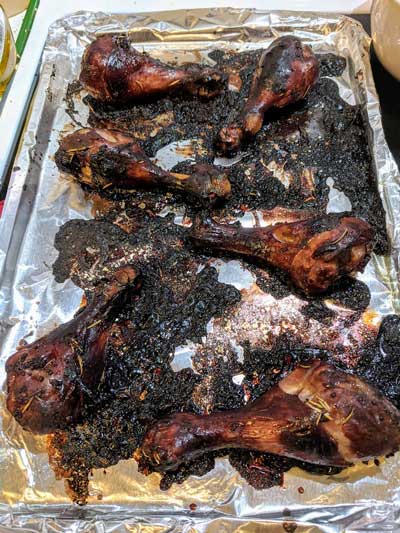 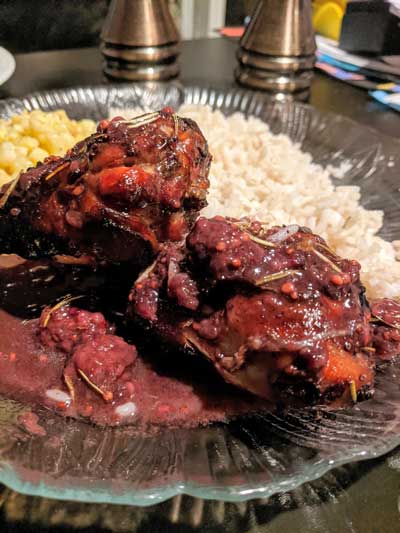 I’ll admit that I was a little leery of baking chicken drumsticks at 375 degrees for only 25 minutes, as most recipes recommend around twice that time. For safety’s sake, I decided to go with conventional wisdom, and I can’t complain at all about the result. I used the extra time to re-boil the leftover marinade in order to make a tasty sauce for the drumsticks, which were absolutely delectable with rice and some buttered corn on the side. It genuinely tasted like summer despite the weather outside still being wintry cold, and it was a lovely reminder of pleasant days outdoors ahead.

Next week, we bake a delicious pie while checking out the second in one of my favorite new cozy series, though this is the first installment to include a recipe! Do join me!