Life is certainly seeming far more profitable nowadays for Whitney Whitaker and her cousin Buck after getting their property-flipping business up and running, with several successful projects under their tool belts. Their latest project presents an interesting new challenge though. The abandoned church and parsonage they’ve just purchased have good bones but seem pretty far afield from Nashville, even for privacy-loving homeowners. Inspiration strikes when Whitney remembers that the Grand Ole Opry is also housed in a former church; with performance space at a premium in downtown Nashville, a slightly out of the way venue might prove unique enough to draw large crowds. Turning the parsonage into a cafe run by her best friend and Buck’s girlfriend, food truck owner Colette, will only add to the venue’s appeal.

Of course, even in the backwoods, it’s good to mind your neighbors—especially when their attitudes could make or break your business ventures or, at least, determine the number of extra headaches you’ll have to deal with. Unfortunately, their immediate neighbor Nolan Sibley has not only bought all the properties surrounding them but also insists that he owns the rights to the church and its land. Whitney and Buck know that there’s no way they would have missed any legitimate ownership claim during their buying process, so they are happy to meet him in court, even as they proceed with their renovations.

Nolan, of course, is less than thrilled by this, even as they do their best to be civil to him for the sake of not inflaming the situation any further. But when Sawdust, Whitney’s adorable cat, finds a dead body in the church’s belfry one day, the discovery turns everything upside down. Who could have possibly had it in for the delivery man who’d just dropped off new stained glass windows to enhance the performance space? Was poor Gerald Woodruff’s murder the result of an opportunistic robbery gone awry? Or could Nolan be so hateful as to kill an innocent man just to throw a wrench into Whitney and Buck’s plans?

This was a twisty tale of innocent victims, petty criminals, and devious masterminds as Whitney has to untangle the truth behind who killed the affable delivery guy with a hidden past. I was a little surprised by how quick she was to jump to conclusions about anyone who had even a trace of suspicion linger over them, though I imagine that’s par for the course when your police detective boyfriend actively bounces ideas off of you. Sawdust’s viewpoint chapters were also a surprise for me but of the more pleasant kind, as readers are treated to a glimpse of the loving little scaredy cat’s feelings over the course of the book’s events.

There were two dessert recipes and one drink recipe included with this culinary cozy. I just had to try out this delicious pastry: 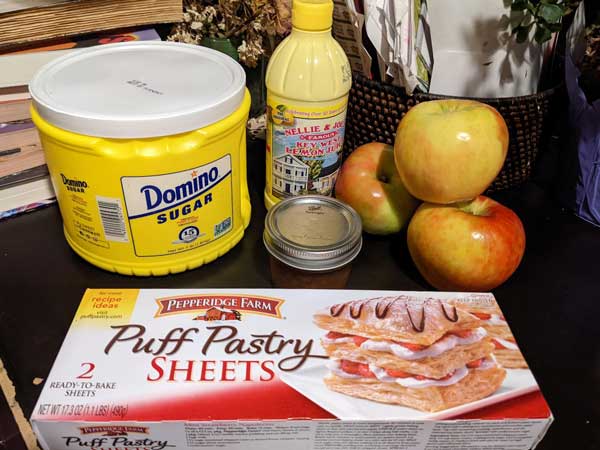 3 apples of your choice: Avoid types with a high water content. Honeycrisp, Gala, and Granny Smith are good choices.

2 sheets of thawed ready-made puff pastry: I recommend Pepperidge Farm. It’s tasty and also vegan. Another option you can use is refrigerated crescent roll dough.

Wash the apples. Core them and cut them in half. Cut the apples into thin slices, leaving the skin on. Place the apples in a microwaveable bowl, adding just enough water to cover the apples. Add the lemon juice to the bowl. Microwave the apples on high power until the apple slices are pliable and can bend without breaking (approximately 8 minutes). Drain the apples and pat them dry with a paper or dish towel. 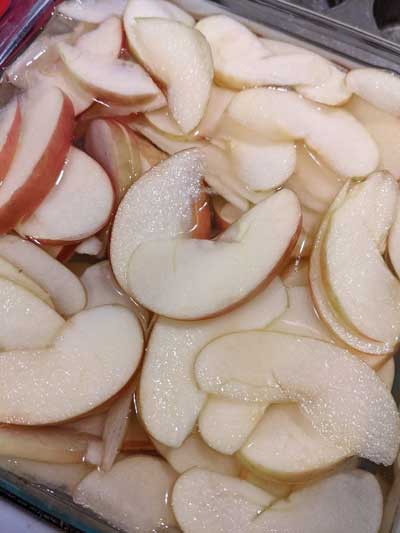 Roll out one sheet of the puff pastry and cut it into six strips sideways along the shorter edge. A pizza cutter works great for this purpose. Place the jam and one tablespoon of water in a microwaveable bowl and heat for just a few seconds to make it easier to spread.

Spread the warm jam on the strip of puff pastry. Arrange the apple slices on the top half of each strip. Fold the lower half of the strip up over the apple slices, and roll it from one end to the other. Place the roll in the muffin pan.

Bake for approximately 40 minutes until golden and jam sauce is bubbling.

Remove from oven, cool for 5 minutes, then carefully remove them from the muffin pan to finish cooling. Sprinkle with the coarse granulated sugar. 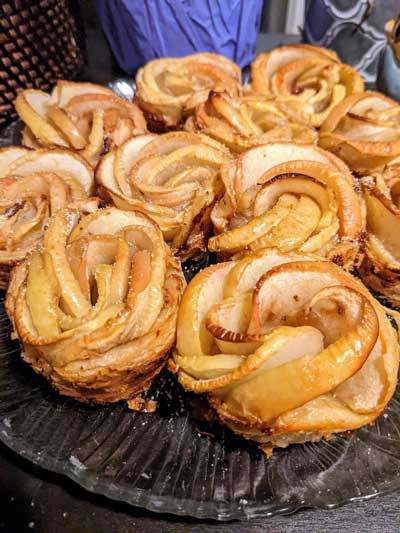 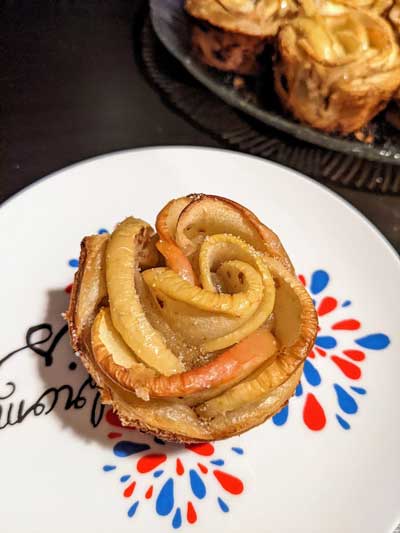 I love how this dessert isn’t too sweet, likely helped by the fact that I used the homemade strawberry jam my chef friend Laura gifted me with earlier this year. It’s also quite easy to put together, though I had to look up videos online to make sure that I was arranging the apple slices properly on the top half of the pastry, with the long edges of the peel showing in order to better replicate a rosette. The pizza cutter tip is genius, and I also recommend putting a thinner slice of apple at the starting end of where you’re going to be rolling up each rosette to make the pastries easier to construct.

Next week, we head way out west to bake up a delicious muffin hybrid while investigating a murder at a self-help retreat. Do join me!