Cooking the Books: A Fatal Glow by Valerie Wilson Wesley

One thing I really appreciate about the heroine of the Odessa Jones Mystery series is how different she is from so many other culinary cozy protagonists. While food is her passion, the process of actually catering it—especially as a second job—takes a lot out of her. This isn’t the only realistic thing about our heroine; I actually love how she’s untrusting and defensive but fully aware of when she’s being unfair, taking steps to rectify matters when her need to protect herself oversteps and needlessly hurts others in the process. Dessa is a complex and relatable adult, not prone to recklessly haring off in order to advance the plot, and an absolute breath of fresh air on the contemporary cozy scene.

In this second book of her eponymous series, she’s still struggling to make a comfortable living while working at Risko Realty, when her boss, Tanya Risko, drops a lucrative opportunity right into her lap. Tanya has recently started dating Tyler Chase, the hotshot younger partner of local real estate developer Casey Osborne. Dessa doesn’t have the best memories of Casey from when they were in high school together, but she could definitely use the money that comes from catering a fancy brunch for the successful businessman. Given the almost familial bond between the Risko Realty staff members, it isn’t surprising when several of them offer to help her set up and serve at the somewhat last-minute do, including young Louella Jefferson, who shares Dessa’s dim opinion of Casey—though for different and far more recent reasons.

The brunch starts out well enough. Despite all of Dessa’s best efforts, however, the supposedly classy soiree soon degrades into a food-slinging disaster as strong personalities clash and almost come to blows. But the absolute worst happens when Casey suddenly collapses after the last in a series of volatile arguments. While his death looks like the result of a heart attack, the police that arrive on scene must perform their due diligence, which includes taking a sample of some of the food Dessa served in order to ascertain that he didn’t die of food poisoning from her wares.

Dessa’s anxiety over this blow to the reputation of her still nascent catering business quickly fades as she becomes involved in the lives of two young people inextricably tied to Casey’s death. One is Lacey, the troubled teenage son from his first marriage to Dessa’s old friend Aurelia. The other is Erica, Louella’s even younger daughter, whose world is turned upside down when one of her family members is accused of Casey’s murder. Dessa doesn’t have kids of her own, but her maternal instincts go into high gear when it comes to doing what’s best for the children who’ve suddenly been thrust into her orbit. And if doing what’s best means getting involved in solving another murder—and using her still developing psychic abilities in the process—then that’s just what she’ll have to do.

As someone who read Agatha Christie’s entire canon before I was out of middle school, I wasn’t surprised by either the how or whodunnit, but I certainly appreciated the painful and often unexpected interplay of personal relationships that led up to the murders. I only wish that greater clarity had been given regarding the circumstances of the second death, though Valerie Wilson Wesley’s framing of all these events as tragedies instead of puzzles to be solved was much appreciated by this voracious mystery reader.

There was only one recipe included in this book, but it is absolutely spectacular. 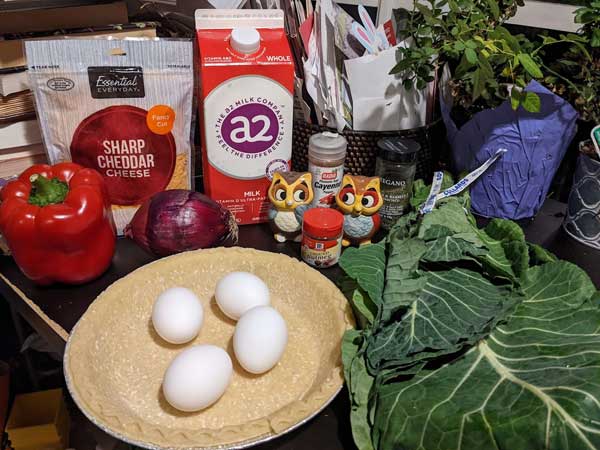 Basic piecrust for 9- or 10-inch pie pan (When I have time, I make my own crust, but store-bought is fine.)

1 ½ cups chopped cooked fresh or frozen collard greens (Be sure to drain and squeeze them dry or your quiche will be watery.)

Heat oven to 375 degrees F for metal pan or 350 degrees for a glass pan. Roll out and ease pie dough into bottom and up sides of pie pan. Tuck edges under and crimp. Using a fork, prick bottom and sides. Partially bake for about 12 minutes until crust is beginning to color.

Sprinkle half of cheese on piecrust. Pour egg mixture on top of cheese. Sprinkle remaining cheese on top. Bake until a knife inserted halfway between center and outside edge comes out clean, which is usually from 45 to 60 minutes.

Let rest 10 minutes before cutting into wedges to serve. 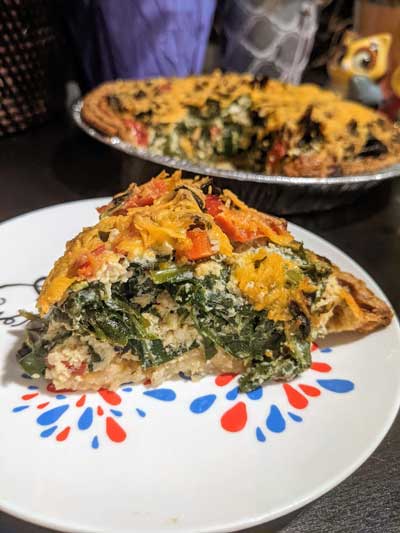 First, I want to note the wonderful exactness of the measurements listed in this recipe. I have baked a lot of quiches and often find myself with far too much filling for one pie crust. The proportions in this recipe, however, were absolutely perfect.

The concept of perfection also came to mind when I was tasting this. I love how collards and red bell peppers are used as more robust alternatives to the usual spinach and tomatoes. The grated onion adds another wonderful dimension to this dish that tastes far more complex than your average meatless pie. I would definitely recommend keeping this recipe on hand for when you want to jazz up a brunch with a slightly different take on vegetarian quiche.

Next week, we travel south as I finally get back to baking up sweets while investigating a suspicious death in a contested building. Do join me!