An autopsy for a... bird? Learn about this bizarre true crime case from Susanna Calkins, author of Murder Knocks Twice.

In 1929, there were two “Canary Murder” Cases. The first was a film starring Louise Brooks, William Powell, and Jean Arthur, released in February, which told the story of a showgirl (“The Canary”) who was strangled after a failed attempt at blackmail.

The second “Canary Murder” occurred in Chicago towards the end of the year, and featured the real murder—and attempted cover-up—of an actual bird named “Nimble.” Three law enforcing agencies became involved with investigating the bird’s killer.

This bizarre true story started on October 6, 1929, when 45-year-old Anna Gustafson, owner of a tea room, committed suicide in her Chicago home. She had left the gas jets on in her basement oven, eventually succumbing to the fumes.

Her body was discovered by Noah Weinstein, a young attorney who was boarding in her home.

Though he could not save Miss Gustafson, Mr. Weinstein was in time to rescue her pet canary “Nimble,” whom he discovered singing cheerfully in another part of the house. He moved the bird to his own bedroom, leaving it in its cage by an open window. 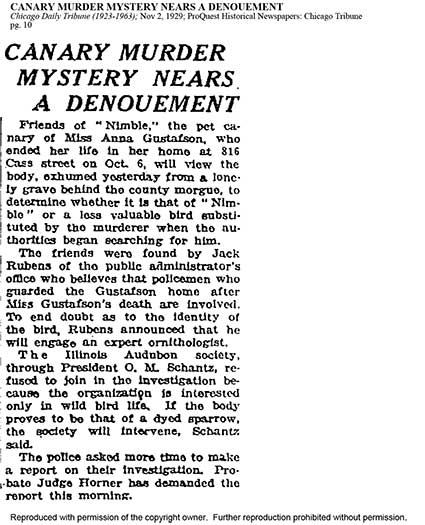 When the police arrived, Officers Fleeman and Miller removed her body to the morgue, while Officers Tobin and Dumpke remained behind in Gustafson’s home to guard her effects. Officer Tobin saw the bird perched on its swing. Later, however, when Officer Gibbons arrived to relieve them, Gibbons saw the cage, but no bird.

The next day, Mr. Weinstein returned to the home but was not allowed to take anything until he had received approval from the public administrator. At that point, he realized that Nimble, a rare and expensive canary who had been trained to sing and do other tricks, seemed to have disappeared.

Weinstein returned that evening with Jack Rubens, a public administrator, both armed with flashlights, where they began to search for the bird. They confirmed that Nimble could not have undone the lock on his cage.

Several days later, Miss Weinberger—a friend of the deceased—stopped by the house with birdfeed for Nimble. The policeman on duty, Officer Dumpke, informed her that the bird was not there, but Miss Weinberg demanded that she be allowed to search the house for the missing bird.

At that point, she made a sad discovery. Atop a sewing cabinet, in plain view of the room, there lay a dead bird. A canary. But upon further examination she made a startling pronouncement:

The dead bird was not Nimble.

Where was Nimble? Who was this other canary?

Miss Weinberger then discovered that other items were also missing from her friend’s house, including some clothing and silverware.

Deeply suspicious, Miss Weinberger accused the police of theft and murder. The police claimed that the canary, whom they insisted was Nimble, had simply succumbed to the gas fumes it had been exposed to days earlier.

Also dissatisfied with the policemen’s explanation, Mr. Rubens called for a coroner’s physician, Dr. Kearns, to perform an autopsy on the bird. Shortly after, Dr. Kearns revealed the startling verdict: The dead bird had died of fractures to the cervical vertebrae, consistent with its neck being wrung.

This discovery prompted Mr. Rosen to launch an investigation into the bird’s murder.

Believe it or not, the story gets weirder.

Miss Gustafson’s friends continued to proclaim that the dead bird was not Nimble. The dead bird was inferior to Nimble, they claimed. Rubens, heeding their outcry, ordered an exhumation of the bird, who had been buried by a janitor outside the morgue. As the November 1, 1929, Tribune explains:

On the theory that the body of another canary had been substituted by the murderer to cover his tracks, Rubens asked that friends of the slain bird be permitted to view the remains, to establish the corpus delicti.

(And yes, the request was made of “friends of the slain bird.”)

The investigation continued over the next eight months, well into 1930. The policemen were brought to the scientific crime detection laboratory at Northwestern University—the first crime unit in the nation—where they were asked to take polygraph tests. The tests were carried out by Leonarde Keller, of the state department of criminology who had helped create the “deception test” in 1921, and August Vollmer, Professor of Police Criminology at the University of Chicago.

It was the lie detector that broke the case.

On May 23, 1930, Judge Henry Horner adjudged Officer Tobin of stealing Nimble and the other property, and of substituting—and killing—a less expensive canary in Nimble’s place, hoping to hide the theft. Tobin was ordered to pay twenty-five dollars to the public administrator’s office.

We learn more because a few months later, Keller published a full account of the case in the first volume of the American Journal of Political Science (1930),[1] revealing both the questions and the responses.

The questions all required a “yes or no” answer:

During his test, Tobin’s pulse, blood pressure pulse, and respiration showed he knew something about the theft of Nimble. He was asked to wait in another room, along with another officer. They administered a second test, with the same questions but slightly rephrased and in a different order.

The second test confirmed that Officer Tobin had taken the canary and other household items; Officer Dumpke had stolen a lampshade (valued at sixty cents) and may have known who brought the dead bird to the premises; Officer Gibbons probably knew who took the canary but did not wish to say.

So what in the world was this all about? Why the autopsy, the exhumation and the three-pronged eight-month investigation over the death of a bird?

As Keeler (1930) explained, “The Probate Judge in charge of the case, exasperated by the prevalence of police looting, sought, by conducting a rigid examination in this case, to put an end to further depredations.” (p. 381)

So a justice of sorts for the dead bird. But as for what happened to the real Nimble—after he was kidnapped—will likely remain a mystery.

The first mystery in Susanna Calkins’ captivating new series takes readers into the dark, dangerous, and glittering underworld of a 1920s Chicago speakeasy.

Gina Ricci takes on a job as a cigarette girl to earn money for her ailing father—and to prove to herself that she can hold her own at Chicago’s most notorious speakeasy, the Third Door. She’s enchanted by the harsh, glamorous world she discovers: the sleek socialites sipping bootlegged cocktails, the rowdy ex-servicemen playing poker in a curtained back room, the flirtatious jazz pianist and the brooding photographer—all overseen by the club’s imposing owner, Signora Castallazzo. But the staff buzzes with whispers about Gina’s predecessor, who died under mysterious circumstances, and the photographer, Marty, warns her to be careful.

When Marty is brutally murdered, with Gina as the only witness, she’s determined to track down his killer. What secrets did Marty capture on his camera—and who would do anything to destroy it? As Gina searches for answers, she’s pulled deeper into the shadowy truths hiding behind the Third Door.