October 28, 2020
The role of the lady detective in mystery novels shifted at the same time The New Woman movement swept across the nation. Shelley Noble, author of the latest Lady Dunbridge mystery A Resolution at Midnight, compares how her protagonist Lady Dunbridge stacks up against the typical female detective character in dime novels.

When I was developing ideas for writing a Gilded Age Manhattan mystery series, I knew that I wanted to set in in the first decade of the Twentieth Century. My protagonist Lady Dunbridge would be one of the “new” women. I would blend history with the popular imagination of the era. An adventure story that could still be a multi-layered mystery with three-dimensional characters, but with a sense of being just a little larger than life. Fortunately, there are plenty of primary sources for history, and where better to experience popular culture than the “dime” novels of the day.

The “New Woman” movement was led by a generation of women who yearned for higher education; who wanted to become professionally and financially independent; who demanded the vote, the right to birth control, and the freedom to explore life…

And to have some fun. A “new” woman might light up a cigarette in private, or show her ankle at Coney Island. She might go on a five-mile bicycle ride with like-minded women between her classes at Barnard, or march for the right to vote. More women (and men) were reading for pleasure than ever before, in large part due to the phenomenon of dime novels.

I have always enjoyed dime novels. The style is not ours, the mores are sometimes cringe-worthy. They were a product of their time, a time that was changing rapidly, change that brought out resistance and fear, as well as excitement.

From the mid-nineteenth century to the 1920s, billions of the sensational magazine-like dime novels were produced and sold throughout the United States. Inexpensive to produce and ship, they were produced to appeal to the middle and lower classes with their western adventures and working girl romances. But they quickly spread out to all facets of society. Much in the same way as comics and superheroes of later years, these stories fired the imagination, spoke to the emotions, excited the sense of adventure.

And were therefore very dangerous. They were castigated by the protectors of morality. Denounced by political figures, belittled by the literary minds of the day. And yet they thrived.

The late eighties and nineties saw the rise of dime novel detective fiction. Written for a largely male audience, the novels were populated with male detectives, the superheroes of the day. And within this crowded field, a few intrepid lady detectives demanded attention.

Women detectives already had appeared in classic mystery novels in the guise of Mrs. Pascal, Mrs. Butterworth, and others. These lady sleuths focused on the puzzle and the process of detection. The “new” lady detectives of the dime novel were written in the same sensational action-packed style as their dime novel male counterparts. After all, most of them were written by men. At first.

Read our review of A Resolution at Midnight by Shelley Noble

Readers were enamored with a woman who was as strong and smart as a man, yet, they were also shocked by the same qualities. It was left to the writers and publishers to juggle melodrama (the pervading tone of the stories) and the new ideas with society’s expectations. The problem was solved by separating these qualities into two personas, the detective and the woman. They did this in many ways, but there were four themes that almost all authors adhered to.

Which brings us to one of several such women, Madge Nelson, the Society Detective (the nom d’investigation of Alice VanCamp) in “A Strange Guest Among the Four Hundred.”(Old Sleuth)

1. The female detective is indubitably a virtuous woman.

“It was admitted that besides being a brilliant woman, not a breath could be said against her.

“She was a masterful woman, and yet possessing all those delicate feminine ways that so endear a woman to the opposite sex. She was as dainty as she was beautiful, with a figure that artists raved over.”

In complete honesty, the same can not be said about Lady Dunbridge. After all, she is a “new” woman and a countess, and as such, has had her share of harmless fun.

2. Only the direst of circumstances would drive a woman of virtue to accept what Sayers later dubbed as an unsuitable job for a woman.

It’s still a trope we see in modern-day mysteries, an inciting situation where the protagonist is driven from her home; left penniless by her husband; accused of a murder she didn’t commit.

Alice VanCamp, (Madge) is thought to have a fortune, but she is actually in danger of losing her family’s home and dire needs call for dire actions. She becomes a detective:

“Alice, upon the death of her parents, found her father’s affairs in such bad shape that she realized the necessity of at once doing something for herself. She was proud and it was her ambition to retain the family name and the old home on lower Fifth avenue, unsullied.

As for Lady Dunbridge: She’s a young, almost penniless, dowager countess. With only the prospect of remarrying or a solitary life with her Aunt Sephronia, she decides to sail for America to make a new life, only to find that her best friend’s husband has been murdered. The friend whom she hoped to rely on until she was settled. Dire circumstances, indeed. And all too common in life as well as in fiction.

3. Lady detectives are appropriate in certain situations where a man would not be. They can more easily move about higher society, are more able as hostess and guest, and when necessary can disguise themselves as a servant, trusted friend or inveterate gossip.

“Not one of the young society woman’s friends suspected that she(Alice) was leading what they would have called a double life. This very fact enabled her to get closer to many mysteries than would otherwise have been the case. When Madge the Detective got a society case to investigate, Alice VanCamp usually worked it up as a favored guest. Hers was a clever and brilliant mind.”

Being a countess, Lady D. finds herself a desired guest in the upper echelons of society social events. Known for her discretion and having had success with her first amateur investigation, she is approached by an anonymous entity to solve scandalous and sometimes politically volatile murders discreetly.

4. Female detectives are given dual traits that enable them to move from one persona to the other. When investigating, they approach action like their male counterparts, tracking villains, picking locks, participating in slugfests. But away from the action, they usually return to their expected roles of femininity, ultimately being dispatched to married bliss when the investigation was over.

Suddenly releasing herself from the fellow’s grip, the girl (Madge) dealt him a powerful blow that felled the man to the floor.

Ere the other man was able to recover from his astonishment, he caught a sledge-hammer blow to the neck that sent him spinning across the floor, landing him in a motionless heap against the wall.

“There, I think I have taught you loafers a lesson that you will not soon forget,” muttered Madge.

While Lady D. doesn’t usually resort to fisticuffs herself, she has several sidekicks who feel no such qualms.

One thing both Madge and Lady D. have in common that many of their fellow detectives didn’t, was that neither of them have been married off.

And I can safely say… Absolutely nothing about what might befall Lady Dunbridge. Though she has declared that though she might consider pulling the rug out from under a criminal, or hiking up her skirts to chase him or her down the street, she would never ever allow herself to be married off in the end.

However, I did give her a couple of possible romantic interests. Also developed from the pages of popular fiction. Just for the fun of it.

Madge is only one of many new characters, (Kate Edwards, Cad Metti, Kate Goelet, Hilda Serene, Loveday Brooke, etc.) grappling to find their place in history, largely forgotten but nonetheless members of the army that went before, creating a foundation on which later women detectives would stand.

The female detective was to pass out of existence along with the rest of the dime novel heroes and heroines in the second decade of the century. But she remerged in the classical English mystery, eventually defining new sub-genres, and making a permanent place for herself in the genre.

Today she is capable, intelligent, able to outwit or outfight the bad guys, bring the perpetrators to justice, and she doesn’t have to get married at the end. 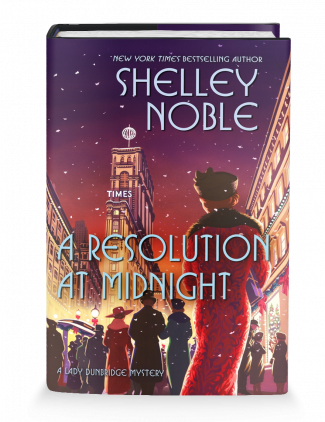 About A Resolution at Midnight by Shelley Noble:

Roasted chestnuts from vendor’s carts, fresh cut spruce trees lining the sidewalks, extravagant gifts, opulent dinners, carols at St Patrick’s Cathedral, a warm meal and a few minutes shelter from the cold at one of the charitable food lines…

And for the first time ever an amazing giant ball will drop along a rod on the roof of the New York Times building to ring in the New Year. Everyone plans to attend the event.

But the murder of a prominent newsman hits a little too close to home. And when a young newspaperwoman, a protégé of the great Jacob Riis and old Vassar school chum of Bev’s, is the target of a similar attack, it is clear this is not just a single act of violence but a conspiracy of malicious proportions. Really, you’d think murderers would take a holiday.

Something absolutely must be done. And Lady Dunbridge is happy to oblige in A Resolution at Midnight, the third book in this best selling series.