February 7, 2021
Susanna Calkins, author of The Sign of the Gallows, explains how cryptography was used in 17th Century England... not just by spies and traitors, but amongst regular people too.

Cryptography in seventeenth-century England was not just the stuff of spies and traitors, a fact that became a major plot point in The Sign of the Gallows, my fifth Lucy Campion historical mystery. While ciphers had grown more complex between the 16th and 17th centuries with the development of new mathematics, the actual practice of secret and hidden writing occurred in different domains of everyday life. Merchants might send messages about when and where shipments might occur out of fear of theft. Leaders of non-conformist religious sects like the Quakers might communicate with their followers in code, informing them of their next meeting. Friends and merry-makers might write riddles and jests using ciphers to entertain one another, in a type of pre-parlor game. Lovers, especially those unacknowledged couples, might write amorous messages that could not be read if discovered by jealous husbands or angry parents.

Mathematicians and philosophers wrote lengthy tracts about the different dimensions of cryptography intended for public consumption. These tracts were not necessarily published as expensive bound books intended for a wealthy audience, but instead were often published and disseminated by common printers using the cheap paper of the penny press. One of the more well-known publications was Mercury, or, The secret and swift messenger shewing, how a man may with privacy and speed communicate his thoughts to a friend at any distance, by John Wilkins (n.d., 1694). Another was Samuel Morland’s, A new method of cryptography, humbly presented to the most serene Majesty of Charles the II (1666). As such, they were accessible to a broader literate audience, although some were written in such complex terms that only someone who had studied at university would likely understand.

In contrast, a cipher referred to the manipulation of letters within a word with other letters, numbers, or characters. This might involve simple substitutions, where the letter A is substituted for the letter G, the letter B is substituted for the letter H and so on, or with much more mathematical complexity (multiple manipulations within a given cipher) written out in a table (the key). In this case, the receiver of the message would need to know where to start the deciphering. The receiver and the sender would have to agree ahead of time on how to indicate the starting point. Perhaps if the first letter is a C, they know to start the deciphering from the third column in the table.

These tracts also warned how to keep others from deciphering the messages, explaining how the use of “nulls” and “dobleths” could throw someone off. Nulls are simply extra letters or characters that the receiver knows to ignore. Dobleths are the use of double letters, like two F’s together, or other common combinations, like “Th.” Both of these methods, along with the practice of not separating words with spaces, would keep someone, in theory, from cracking the cipher.

This fascination with cryptography—in both the creation of codes and ciphers, as well as the process of decoding and deciphering—had become more pronounced following the disastrous and tragic end of Mary Queen of Scots a century earlier. Mary, imprisoned by Queen Elizabeth I in the Tower of London, became involved in an ill-fated plot to rescue her, and ultimately overthrow the monarchy. One of her chief conspirators and would-be rescuers, Anthony Babington, a Jesuit priest, devised a code for them to communicate. Unfortunately for them, her cousin Queen Elizabeth I had gotten wind of this, and asked her spymaster, Sir Francis Walsingham, to devise a way to entrap Mary and decode their messages. Long story short, Mary along with her conspirators were executed for treason after the code was successfully broken.

(As a side note, the title of my book, The Sign of the Gallows, comes from the Babington code which had been published and available, and again in use, during the seventeenth century). For an intriguing take on this story, check out Allison Epstein’s debut historical mystery, A Tip For the Hangman (Doubleday 2021).

In addition to secret reading with codes and ciphers, there were also popular accounts about cryptography that focused on hidden, covered, or invisible writing. For example, “G.B’s” impossibly titled piece- Rarities, or, The incomparable curiosities in secret writing, both as well as by waters as cyphers, explained and made familiar to the meanest capacity by which ministers of state may manage the intrigues of court and grand concerns of princes, the ladies communicate their amours, and every ordinary person (only capable of legible writing) may order his private affairs with all imaginable safety and secrecy—explains how a commoner might readily hide their writing. A few examples include:

Certainly, encryption and decryption became more sophisticated over time. But protecting everyday secrets in the seventeenth century, particularly out of fear of theft or fear of embarrassment, was certainly part of the gradual shift to the more modern sense of privacy we are familiar with today. 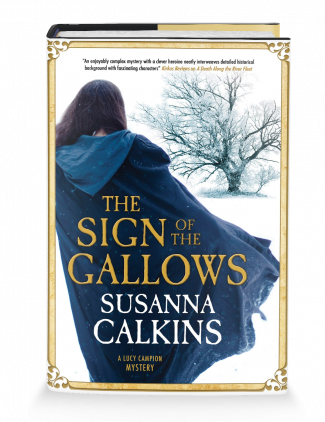 About The Sign of the Gallows by Susanna Calkins:

London, 1667. On her way to a new market to peddle her True Accounts and Strange News, printer’s apprentice Lucy Campion quickly regrets her decision to take the northwestern road. Dark and desolate, the path leads her to the crossroads—and to the old hanging tree. She doesn’t believe in ghosts, but she’s not sure ghosts don’t believe in her.

But before she even reaches the crossroads, she’s knocked off her feet by two men in a hurry. What were they running from? To her dismay, she soon discovers for herself: there, dangling from the tree, is the body of a man.

Did he commit self-murder, or is there something darker afoot? The more Lucy learns, the more determined she is to uncover the truth. But this time, even the help and protection of magistrate’s son Adam, and steadfast Constable Duncan, may not be enough to keep her safe from harm . . .

Book Review: The Fate of a Flapper by Susanna Calkins

Nineteen twenty-nine is a turbulent, troubled time in Chicago. The volatile stock market is showing signs of overheating. For nine months, Gina Ricci, the heroine of Murder Knocks Twice, has been a cigarette girl at Chicago’s premiere speakeasy. During the day she works at Mr. Rosenstein’s pharmacy while also lending at hand at her father’s…