Last week, we were left wondering if laughter really is the best medicine. This week, we make it to the Dark Tower as we close out our long journey through Stephen King’s magnum opus.

The Dark Tower is very close, but our ka-tet is spread far and wide. Roland and Eddie are in 1977 where they have just finished meeting with the author Stephen King. In 1999, Father Callahan and Jake are about to storm The Dixie Pig lounge where Susannah is being held along with Mia, who is about to give birth to an unholy demon: this child has the DNA combo of Roland and Susannah and a “co-father” in the Crimson King. So, we are very close to our destination, the stakes are high, and it’s anybody’s guess who will live to see The Dark Tower.

The Dark Tower looms on the horizon for both our ka-tet and you, our loyal readers, as we count down the days to the premiere of The Dark Tower film. The plan is to finish the series on the Tuesday before the premiere, so we’ll be splitting The Dark Tower into six sections (about 200 pages each) and meeting here at our usual time (Tuesday at 12 p.m. ET) to discuss major themes, motifs, and reactions. Make sure to bookmark the HQ page for the schedule and links to all of the chapter discussions as they go live! This week, we finally make it to the Dark Tower as we close out our long journey of Stephen King’s magnum opus. Join us in the comments for a discussion of the final chapters of The Dark Tower: PART FIVE: The Scarlet Field of Can’-Ka No Rey – CODA: Found!

At last, we have reached the pinnacle. Instead of a play-by-play of these final passages, let’s break it down into four sections: Susannah, Oy, The Crimson King, and The Dark Tower/Coda. I’ll give my two-cents, and hopefully, you will join in with your own in the comments.

I liked the way King handled Suze’s departure, though it occasionally felt like a hectic cleaning out of characters when you later include the billy-bumbler’s exit. Still, the veridical dreams featuring Eddie and Jake calling to her from another world are powerful, and placing myself in her position, I can understand her final decision. Of course, the choice is easier with ka telling her that Roland has to go it alone.

I didn’t get a lot of mileage out of Roland and Susannah’s actual goodbye, though the image of this mighty gunslinger crossing that final transom that Patrick Danville created through art was exhilarating. Suspense delivered. For a character that took me a while to warm to, I felt her happiness and joyed to see her with another Eddie and Jake. 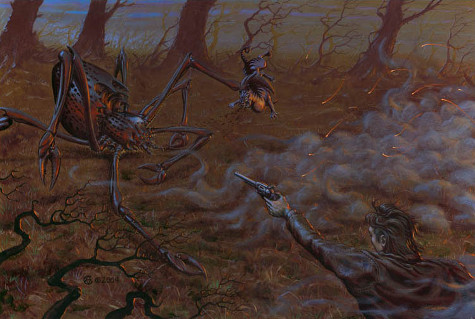 Okay, King. I lived with Eddie and Jake dying—though I didn’t understand the necessity of Jake’s death at first (for the second time, no less)—but Oy’s demise seemed downright mean and unnecessary. With Roland fighting to stay awake, he hopes the young Danville will remain alert while he gets a few winks. Big mistake. But luckily for the gunslinger, Oy remains vigilant, and Roland wakes to horror:

There he was, twisting in the spider’s grip. Both of them were clearly visible in the light of the fire. […] The bumbler wriggled furiously to and fro, snapping at the spider’s body with foam flying from his jaws even as Mordred bent him in a direction his back was never meant to go.

When Oy says “Olan” as he’s dying, a lump surged into my throat. In some way, this death was the hardest because the little creature had so much heart and never faltered along the trail.

Over the months of rereading, I’ve kept my six-year-old daughter apprised of the ka-tet’s adventures in an abridged, censored version of The Dark Tower. Her suggestion was, “Why didn’t Roland have Patrick draw a guard to stand watch or a huge wall around them so Oy didn’t have to die?” Well, Mr. King?

As for Patrick Danville, we didn’t get to know him that well, so I wasn’t as invested in his ending like the other characters. But it’s a pleasant thought that, perhaps, he met up again with Susannah.

The image of the Crimson King psychotically lobbing sneetches that Roland blows away is very cinematic in scope, and the gunslinger and Patrick pinned down has a nice Western feel in keeping with one of the main themes. I found Roland’s defeat of the Crimson King a bit underwhelming but not dull. It would have been preferable to get inside the head of this evil being a bit more and learn what it had been like to be locked out of the tower for so long—a little palaver wouldn’t have hurt. Very much like the eyes being left behind after the rest of him is erased by Danville. Orbs to watch and no body to do anything about it.

I laughed good naturally as King referred to “the unfortunate ones” … those readers who must have a concrete conclusion and are not satisfied with the journey alone. Normally, I am one to forgive a book for a less-than-satisfactory ending so long as I have enjoyed the ride. But The Dark Tower was no normal series, and though he suggested stopping with the Jake, Eddie, and Susannah happy closing—yeah, I had to read on. As I’m sure you did too. How brilliant, though, the technique of preparing us in advance that it would be our own fault if we were let down with the story’s finish.

Yet some of you who have provided the ears without which no tale can survive a single day are likely not so willing. You are the grim, goal-oriented ones who will not believe that the joy is in the journey rather than the destination no matter how many times it has been proven to you.

It was a satisfying though somewhat false summit with a familiar ending. As Roland ascended the tower observing the different rooms of his life, I was reminded of 2001: A Space Odyssey (1968) where David Bowman sees various stages of his own existence. Then, when we learn that Roland has been here before as he looks across the Mohaine Desert where he first began following the man in black on his quest, that image brought back The Twilight Zone’s “Shadow Play” (1961), where a man sentenced to the electric chair tries in vain to convince those around him that he is in a continual loop of being executed. The terror Dennis Weaver shouts as the condemned prisoner was reminiscent in tone to Roland pleading, “Please, not again! Have pity! Have mercy!”

King gives the gunslinger hope and comfort in the form of the Horn of Eld that had been lost at Jericho Hill the last time around. In his latest reality, he had picked it up during battle, and just that little nugget convinces us that Roland may find a different and improved fate. An excellent afterword that hints the gunslinger will find resolution. It also makes it easy for the writers of the soon to be released Dark Tower film by leaving an open field to go in any direction they choose.

And after decades, I finally made it. I wasn’t alone at the end, and I’d like to thank Adam Wagner and Joe Brosnan for considering me for the reread and everyone who joined me on this ten-month journey, especially Alan Williams, who took the time to comment often. We are ka-tet, and it was a helluva lot of fun.

What did you think of the final chapters of The Dark Tower? Head to the comments and start/join the conversation!

*Remember: Be careful with your comments—NO SPOILERS! We will be moderating the comments and deleting anything we feel is a spoiler, so pause before you post and make sure you’re not ruining it for someone else.