September 28, 2020
If there's one thing that's universally beloved by readers, it's dogs. Archer Mayor learned this by experience. Read on for more about Archer Mayor's on-hands research with a police dog trainer and for Archer's recollection of one particular reader who was truly affected by a dog in Trace from his Joe Gunther mystery series.

The newest mystery in Archer's series, The Orphan's Guilt, goes on sale this week!

Tom Hanks made a charming (and drooly) movie with a dog. Stephen King wrote a big book (followed by a movie) about a dog (if maybe a slightly less endearing one). One of the funniest, most gruesome scenes in A Fish Called Wanda featured dogs. Small ones and one LARGE one. And Lassie. Rin Tin Tin.

I was brought up with dogs, and—yep—in my own book, Trace, I presented a tracking dog named after the real deal, “Brio.”

Chris knew (although Brio didn’t) that I spend months every year researching what ends up in each year’s book. Whether it be horses or artificial knees or Gingko trees, I like to find out “new stuff,” about which I know very little, and I hope my readers will enjoy.

With Trace, I was finally in a position, therefore, to take Chris up on his offer.

Now here’s the advantage of writing the way I do, without an outline or an itinerary, or even much of a plot. When Chris suggested a get-together, so he could show me how he puts Brio through his paces, it was simplicity itself to not only do that, but to place part of the book’s action near where Chris lives. We could expand our time together and bring even more exotica into the plot.

As a result, Trace features not just some expert dog handling—courtesy of Chris—but also a scene at an abandoned missile engine testing complex north of Albany that Chris knew about, and which we visited. It was a happy and fruitful meeting of minds combined with my own extremely flexible (and reactive) approach to storytelling.

That, of course, is just the bare-bones outline of this particular adventure, truth be told. My work with Chris actually covered weeks and weeks of field trips, writing, additional reading and education, and finally, an exchange of emails between us in which Chris read the appropriate passages and edited them to reflect proper dog handling techniques.

“You might want the handler to change from a short lead and collar to a thirty-foot tracking lead and harness,” he’d say.

“At this time, the dog’s nose would go up, scenting the air cone rather than the ground.”

It was a terrific experience for me, benefitting from the knowledge of a man who’d worked with dogs for most of his professional career.

All that being said, one of the additional things that I learned had to do with the “fictionalization” of exactly these kinds of scenes in books and movies.

As a result of meeting Chris and Brio, I was also made aware of the many flaws attending the use of dogs in emergency settings.

We are led to believe that as soon as the dogs are called for—for rescues, tracking, drug-sniffing, etc.—all’s well and the solution will soon be in hand.

But dogs are sensitive, moody, distractable, they get tired, just like humans. And their handlers are only as good as their training and instincts. Bad handlers get poor results, even from well-trained dogs. The variables are many, complex, and sometimes difficult to identify.

So let’s return to where I began this piece: the popularity of dogs.

One of the best exemplars of how this love affair could become downright odd came to me in the form of a furious email in which the reader stated that while she had loved my murder mysteries to date, she would nevermore read another word of mine.

Why? I had “killed a dog” in this latest one. Of course, the irony of her complaint stood out, but aside from her being fine with my having killed dozens of humans (fictionally) over the years, I was still flummoxed by the complaint. To my recollection, there WAS no dog in that particular book. What was she referring to?

In the end, she was right. I had made reference to a dog being killed by the bad guys, but “off camera.” The dog went out into the yard and did not come back. It was a single mention, we never “see” it happen, and the dog hadn’t even been introduced to the reader.

But no matter. I had “killed a dog.” Powerful stuff, our fondness for animals. And as things eventually turned out, a powerful and enriching ingredient during the writing of a book—a process during which I meet new people with fascinating backgrounds, and get to pass along what they tell me to all of you.

Did that reader’s complaint subconsciously stimulate me to later pursue Chris’s suggestion and put his expertise and love of dogs into print? I have no clue. But given how I take my inspiration from the people and situations around me, I wouldn’t be surprised.

Read: New Excerpt of The Orphan’s Guilt by Archer Mayor 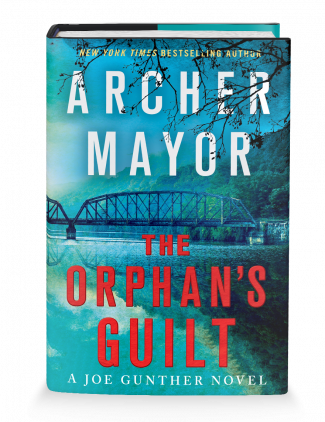 About The Orphan’s Guilt by Archer Mayor:

John Rust is arrested for drunk driving by a Vermont state trooper. Looking to find mitigating circumstances, John’s lawyer hires private eye Sally Kravitz to look into the recent death of John’s younger brother, purportedly from a childhood brain injury years earlier. But what was the nature of that injury, and might its mechanism point more to murder than to natural causes? That debate brings in Joe Gunther and his team.

Gunther’s efforts quickly uncover an ancient tale of avarice, betrayal, and vengeance that swirled around the Rust boys growing up. Their parents and the people they consorted with—forgotten, relentless, but now jolted to action by this simple set of circumstances—emerge with a destructive passion. All while the presumably innocent John Rust mysteriously vanishes with no explanation.