August 20, 2020
Location can be key to creating an immersive experience for a reader, unless you blow it. Read Michael Laurence's new essay about the meticulous research he did to find the perfect location for a climactic scene in his new novel, The Annihilation Protocol, the thrilling follow up to The Extinction Agenda.

If handled properly, the setting of a story can serve almost like a character in itself, one that readers look forward to visiting, time and time again. James Lee Burke’s New Iberia, Stephen King’s Castle Rock, and Michael Connelly’s Los Angeles are all as familiar and comfortable to longtime fans as their own hometowns. Conversely, nothing jars a reader out of a book faster than setting the story in an area that he or she knows well…and getting it wrong.

I remember reading a novel written by a successful author some decades ago and reaching a point in the narrative where the main characters traveled to Colorado Springs, Colorado and thinking “Hey, cool. No one ever puts my hometown in a major release. This’ll be fun!” Only it wasn’t. There were no recognizable locations and those the author attempted to describe weren’t even close to being accurate. Granted, this was before the Internet magically appeared in every home, but for all you kids out there, we still had something called a library, where you had access to research books, maps, newspapers, and just about every bit of information you have available at your fingertips now; we just had to work a little harder to get it. It was as though instead of rolling up his sleeves and digging in, the author figured he’d just fudge it. After all, no one from that city would actually read the book, would they?

The storyline necessitated that I find a location where a man could be killed slowly, right out in the open, without anyone stumbling upon the crime scene too soon, but does such a place even exist in a city with a population of 8.5 million?

Right then and there, I resolved that if I ever became a successful author, I’d put in the work to get the important things right. Readers deserve no less. Now, to be fair, sometimes an author does need to take certain liberties for the sake of the storyline and the vast majority of authors do make every conceivable effort to accurately portray their locations, but there are limits to what can be accomplished from afar. Fortunately, we now have access to Google Maps, which allows us to virtually explore nearly every city on the planet, and a bottomless collection of photographs taken by people from all around the world, but what if your story requires a level of detail you simply can’t find online? What if the fate of your book hinges upon suspending the disbelief of your potential readers, millions of whom know that location infinitely better than you do?

You’d better get it right, because they’ll know if you don’t.

That was my challenge during the process of writing The Annihilation Protocol. The first book in the series, The Extinction Agenda, was set in my native state of Colorado, but for the second book, my editor wanted me to raise the stakes and move the climax to New York City. The storyline necessitated that I find a location where a man could be killed slowly, right out in the open, without anyone stumbling upon the crime scene too soon, but does such a place even exist in a city with a population of 8.5 million?

I went straight Google Maps and commenced a virtual exploration of Manhattan, searching for a location that was not only viable, but shocking in its audacity. I’d done most of the touristy things in the city, so I knew I could strike places like Times Square and Rockefeller Center off my list, but what about Central Park? Could I pull off torturing and murdering a man in broad daylight at a site frequented by an average of 40,000 people a day, 14.6 million people every year?

So I set to work, combing through satellite and aerial imagery and perusing every photograph I could find until I found a suitable site, hidden among the nearly 40 acres of dense woodland that forms the Ramble, right at the heart of Central Park. Of course, there were also several other criteria that needed to be met. My spot had to offer a view of a narrow sliver of a walking path, it had to be visible from the penthouse apartment of a single building along Central Park West, and it had to be on the crest of a hill, isolated from the rest of the city, even during the busiest times of day. I spent days virtually scouting the perfect location until I found one I thought might work. There was only one way to be sure, though.

I had to see it in person.

Finding the location was trickier than I’d expected, but after walking numerous trails, climbing over rock formations, and forcing my way through veritable walls of damp leaves, I reached my destination and had a chance to evaluate with my own eyes whether I’d found what I was looking for or if I was going to have to start all over again. Sometimes the best-laid plans actually do work out.

The following video footage was recorded in the Ramble at 5:30 PM on a weeknight, with the rest of the park brimming with people, no more than half a mile away. You be the judge.

And all of that for a single scene spanning maybe eight pages in the printed book.

Read: Excerpt of The Annihilation Protocol 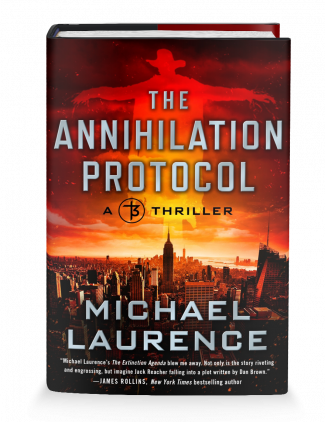 About The Annihilation Protocol by Michael Laurence:

For centuries, a mysterious syndicate known as the Thirteen has staged a silent coup, infiltrating governments and manipulating the course of world events. It’s more powerful than any nation, deadlier than any army. The time has come for it to emerge from the shadows and claim the entire world as its own. And only FBI Special Agent James Mason and his longtime friends stand in its way.

After narrowly preventing a global pandemic, Mason and his team discover an even deadlier threat has already been set into motion. An unknown adversary has produced enough of a lethal nerve gas to wipe every major city off the face of the world, and their only clue to finding it lies in a cryptic message written in the blood of a man found entombed behind a concrete wall. It isn’t until another victim appears—right in the heart of Central Park—that Mason realizes the murders are personal in nature, and figuring out the connection between them is the key to averting catastrophe.

Eight million lives hang in the balance and their only chance of surviving lies in the hands of Mason, his old friends, and a new partner he’s not entirely sure he can trust. Can his team track down a sinister agent codenamed Scarecrow before toxic gas fills the streets of New York City, or will the true power pulling the strings from behind the scenes—the Thirteen—succeed in enacting its genocidal agenda?

The Extinction Agendais Laurence's debut thriller. Before achieving his lifelong dream of becoming a full-time author, he worked as an x-ray/CT/MRI technologist and clinical instructor. He lives in suburban Denver with his wife, four children, and a couple of crazy Labrador Retrievers.