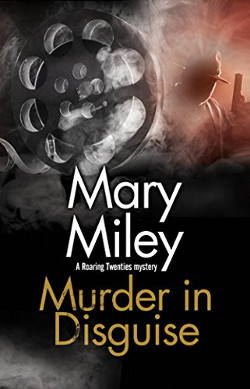 Murder in Disguise by Mary Miley is the fourth book in the Roaring Twenties Mystery series, where 1920s script girl Jessie Beckett investigates the murder of a movie projectionist (available August 1, 2017).

A man is murdered in the projection booth of the movie theater where he works, in front of a witness. The audience is unaware of the shooting because of the volume of the movie. No one is seen leaving the theater before the movie ends. Yet, when the police search everyone as they leave—with the witness there to help identify the murderer—the culprit is not found.

The widow of the murdered man asks her coworker Jessie Beckett to investigate the murder. Jessie isn’t a cop or even a private investigator, but she has solved mysteries in the past. Besides, the policeman assigned to the case doesn’t seem to be in any hurry to close the case.

“I called yesterday and talked to that detective in charge. He sounded impatient, like I was bothering him. Told me he’d call as soon as they knew anything, but I know a cold shoulder when I get one.”

“I’m sure he’ll let you know as soon as they have any solid information.”

“They’ve given up. I could hear it in his voice. I mean, the murderer just vanished into thin air, so what can they do? And so, well, I wondered … everyone knows how good you are at solving murders, would you … I mean, could you solve this one too?”

Set in Hollywood during the height of Prohibition, the novel gives us a behind-the-scenes look at movie making during that time. Jessie works for the studio owned by Douglas Fairbanks and Mary Pickford. They are filming a pirate movie during the course of the book. The author gives us a glimpse at the problems of shooting on location and those of trying to get the color right in the early days of Technicolor.

Jessie has other problems to deal with. Her boyfriend, David, is in jail awaiting trial for murder. He’s a former bootlegger who now sells alcohol legally through his drugstore. Customers only need a prescription from their doctors—and the right amount of money, of course. But he and Jessie ran into some trouble on a train ride from Arizona.

Then, the deaf niece of one of her roommates moves in for a while. Jessie has work, meetings with David’s attorney, and a cop stopping by to check up on her progress. With all of this on her mind, there is little room for investigating the death of a man she didn’t know. But she made a promise.

Personally, I have a fascination with the Prohibition era. I won’t go into which of my ancestors were on which side of the law, but stories that have been passed down—and I’m sure embellished along the way—make for great listening at family gatherings.

The Old Hollywood touches are wonderful. Douglas Fairbanks and Mary Pickford, in all of their dash and glamor, set out to make their own studio as successful as any other in town. They are generous with their employees but also protective of their good names. They support Jessie in her quest to find the killer, but they aren’t too pleased with David’s predicament.

It is interesting to be reminded of the attitudes of almost a century ago regarding race, gender, and with respect to children. The young women have to leave the pre-teen deaf girl home alone. She’s old enough to fix her own food and enjoys reading. Even the police officer who stops by doesn’t see anything wrong with it. Different times.

“She likes to read?” I asked Helen.

“I guess so. I’m sorry. Jessie, I really don’t know what to do with her. Do you think it’s a problem having her here alone all day tomorrow?”

“Certainly not for us, but I’m afraid she’ll be bored to death. How old did you say she is?”

Kit gave the paper a contemptuous glance and, without picking up the pencil, gave a curt nod. Helen sighed. “I hope I’m not arrested for truancy or something like that.”

My favorite part is Myrna Loy, one of the roommates and Jessie’s best friend, in the house. She’s still just a bit player, not yet the household name she will become. Perhaps we’ll get to follow her career as well as Jessie’s in the future books.

That would be great fun, indeed.