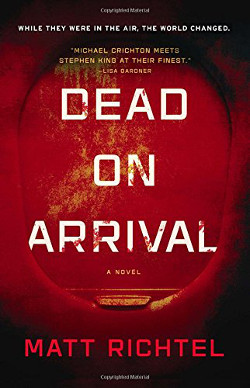 Dead on Arrival is a chilling medical thriller that draws on Matt Richtel's years of science and technology reporting for the New York Times and establishes him as one of the premier thriller writers working today (available August 1, 2017).

“Outside, there was an explosion of light, the airplane’s headlights. They illuminated a swath of pavement, the tarmac. A second later, she turned off the light. But the images were burned into Lyle’s drug-tinged brain: a man in an orange jumpsuit, lying on the ground beside a luggage transporter; two other workers toppled upon each other; a desolate hangar to the right; and the clincher—inside the window of the small airport, a half-dozen would-be passengers or staff. Motionless.

As near as we can tell.” Eleanor said. “Everyone out there is dead.”

Matt Richtel’s new standalone psychological thriller, Dead on Arrival, begins with one of the most chilling openings that I have ever read.

When Delta Flight 194 lands in Steamboat, Colorado, its crew is greeted by only static on the radio and a tarmac full of dead people. Good thing Dr. Lyle Martin, an expert on infectious diseases, is on board to help the pilots figure out what’s happening. But while they are talking in the cockpit, almost everyone else on the plane becomes infected with the same affliction. How did it infect the passengers on the plane so quickly? How come they were immune? Can they survive by staying on the plane, or do they need to take their chances on the ground?

“The vision outside of the flight deck reminded him of one of the worst sleepless fits. The waking nightmares. A hole remained in his bedroom wall made with a broom handle attacking a waffle-sized tarantula that wasn’t there. Were these dead bodies for real? Were they dead?”

The two pilots, Dr. Martin, and one other passenger seem to be surrounded by death with no options for survival, but Richtel’s clever plotting and deft character development move the story forward in a way that reminded me of Michael Crichton’s or Michael Palmer’s medical thrillers. The scariest part of this book is the premise. Richtel’s use of detail to describe the events as they unfold makes it seems more real than imagined, though it does require a little more concentration than the average thriller to keep track of the plot threads. A Pulitzer Prize-winning reporter for the New York Times, Richtel has covered the best and worst of technology for years. He uses this knowledge and his reporting skills to make the characters’ situation even more terrifying by making it seem like this type of scenario could really happen. And maybe it could.

The characters are well-developed, realistic, and in many ways, their own worst enemies. The protagonist, Dr. Lyle Martin, is a flawed character who is doing his best, but as we see his past in flashbacks, we learn that hasn’t always been the case. I found the pilot, Eleanor, to be the most sympathetic character, in way over her head but trying valiantly to be a leader. Jerry, the co-pilot, is at times a bigger threat to the survivors than the disease. Most of the time, I wanted to get away from him. Richtel offers us just enough backstory at the right times to get a full picture of each character.

If you like psychological thrillers with plenty of action, a little science, and you don’t mind an end-of-the-world scenario, then Dead on Arrival is the book for you. You may not want to start this book unless you have a few hours to read—once you start, you won’t want to put it down.