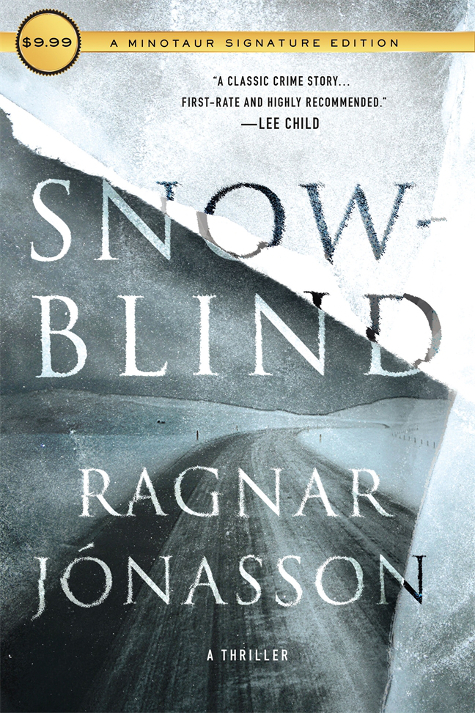 Snowblind is set in the northernmost town in Iceland, Siglufjörður, close to the Arctic Circle and surrounded by high mountains and the sea. Siglufjörður is the town where my father grew up and where my grandparents lived. My family visited Siglufjörður every summer when I was growing up and we still have a house there, so I go there as often as I can. Siglufjörður is a place of rich history. It used to be the center of herring fisheries in Iceland in the mid-twentieth century, with a much larger population than today, and is now undergoing quite a rejuvenation through tourism. My late grandfather wrote a series of books about the history of Siglufjörður and so when I needed a setting for my series, back in 2010, it was really the obvious option, as it was a town I knew very well. Also, I felt it was a town fitting for a crime novel: It is very isolated, only accessible via a mountain tunnel, and with extreme darkness and snow in winter and very long and bright nights in the summertime. In November, the sun disappears behind the mountains, and does not appear again until January. In June and July, however, the town enjoys an almost 24-hour daylight. And needless to say, in real life it is a very peaceful town.

Snowblind is the first book in the Dark Iceland series, currently consisting of five books, set in and around Siglufjörður. The main character in the series, Ari Thor, is just embarking on a career in the police. He was orphaned as a boy, when his mother died in an accident and his father disappeared. When Ari Thor graduates from high school he starts studying philosophy at university and subsequently theology, but gives up on both subjects, eventually graduating as a policeman. In Icelandic, Ari means “eagle” and Thor is the name of the famous god from Norse mythology. When I started writing about Ari Thor, I decided to introduce him to readers as quite a young man, in his early twenties. There were two reasons for this: Firstly, I wanted to make him a few years younger than I was when I wrote the book, so I could put myself in his shoes in some ways. The second reason was linked to the Queen of Crime, Agatha Christie. I was, and still am, a great admirer of Christie, and translated fourteen of her novels into Icelandic before I started writing my own books. In her autobiography, Christie mentioned that she made a mistake when she decided to make her famous detective Hercule Poirot a retired police officer in her first book, adding that her fictional detective “must really be well over a hundred” by the time she wrote her autobiography. This fact was at the back of my mind when I created Ari Thor, so I thought I’d better not make him too old at the outset in case I wanted to write a few books about him.

Going back to Christie, two of her best traits as a writer were her plotting and her sense of place, where the setting was often almost like a character in the story. This also applies to many writers of the Golden Age of Crime, which I have read with great pleasure through the years, including also key American authors such as Ellery Queen and S.S. Van Dine. When writing Snowblind, and the Dark Iceland series, I felt it was important to honor these elements of the Golden Age, the twist in the tale and the importance of the setting. However, I also felt it would be vital to make the stories both Nordic and contemporary, providing some insight into life in the north; Iceland, this peaceful country, known for its magnificent landscape, but also a place where the forces of nature are always lurking in the background, in the form of fire and ice. I hope that the readers will enjoy this mixture of old and new influences, and feel that Siglufjörður may be a place worth visiting again.

Ragnar Jonasson was born in Iceland and works as an Attorney at Law and writer in Reykjavik. Before embarking on a writing career, Ragnar translated fourteen Agatha Christie novels into Icelandic. Ragnar is the co-founder of the Reykjavik international crime writing festival Iceland Noir. He has appeared on panels at various crime fiction festivals, including Bouchercon and Left Coast Crime in the US. Ragnar lives in Reykjavik with his wife and two daughters. Snowblind is his debut novel.

Icelandic crime/thriller author Ragnar Jonasson completes his Hidden Iceland series with a tale so cold, dark, and sinister it will freeze the very blood in your veins to ice. For a small country of only 365,000 inhabitants, Jonasson’s novels would make you think that there is something dangerous cooking around every corner. The Mist is…