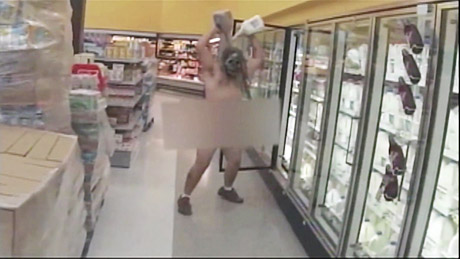 Two men were recently arrested after a video showed one of the men streaking through a Walmart in Kentucky.

According to The Huffington Post, David Daniels and Timothy Smith were arrested over the weekend after a video was taken of a man running naked through Walmart pouring milk (and chocolate milk) on himself and yelling he was on fire.

The man stripped down inside the store wearing nothing but a Halloween mask, socks, and shoes.

The Pike County Sheriff Rodney Scott told the local TV station that the streaker and camera operator are both guilty of indecent exposure. He also believes the prank was planned.

Check out the video… if you dare: