A John Coveny and Hunt Baldwin episode of Longmire is always a treat, because usually it means casting aside the mystery-of-the-week conventions for more serialized drama. But the showrunners truly outdid themselves with this second season finale, which is packed with twists and reversals, high tension, and plenty of angst.

The episode switches back and forth between the three ongoing mysteries: Cady’s accident, Vic’s stalker, and Walt’s wife’s murder.  All three heat up considerably in the first half.

Following Walt’s intimidating visit, it turns out that Vic’s buddy Ed has been beaten badly and is in the hospital. He’s still a threatening creep though! So he tells Vic he wants her to suffer for what she put his partner through and that he’ll take down everyone she loves. Like Lizzie, he too thinks Vic has some daddy issues and a big helping of lust for the sheriff. Of course, he may just be jumping to conclusions because he himself had a fling with Vic back in the day. Which… ewww, Vic! She's tallied up controlling Sean (who doesn’t take the news of all this very well), this creep, and Grandpa Walt? Tim Gunn frowns at Vic’s taste level, frankly. Anyway, his plan is to say the sheriff is the one who beat him up, but Vic won’t let Walt take the fall, so she tells him to blame her when he presses charges. She tells Walt this—who calls bullsh*t about her beating the guy—she has no bruises and Ed’s missing a tooth, which Walt remembers is Hector’s calling card. He also tells her this could mean the end of her career if she’s busted for assault. Vic is upset but resigned to take care of this.

Meanwhile at the reservation, Branch is investigating David Ridges, that shady bartender from Walt’s political mixer who wielded that ice pick with menace! He’s not supposed to be on the reservation, and that pisses off Mathias who arrests him and calls Walt to bail him out. Walt’s in irritable-dad mode about it (but miles better than he would’ve been a couple weeks ago), until Branch admits he found evidence that Ridges sliced the tire, and his fingerprints were on Cady’s car. Walt does a U-turn and they go to Ridges' cabin on the res to investigate, but they’re too late. The guy’s committed suicide and taped it, along with a weird mystical speech about time traveling. Yup. Jacob later confirms to Branch that Ridges tampered with Cady’s car, and when Ridges' body goes missing, Branch wonders if Jacob actually killed him and did a good job of making it look like a suicide.

As always with Longmire, some of the best bits are the tiny details. There’s a throwaway moment when Branch is walking down the sidewalk in Durant, and he bends to pick up a cigarette butt and toss it out. It’s a clear hearkening back to the pilot episode and Walt’s penchant for picking up litter, and a wonderfully subtle clue that Branch is back on the straight and narrow, following in Walt’s good guy footsteps. (They work together quite well once again in this episode as they investigate and it’s just really nice. That might be the most interesting and unexpected relationship on the show.) Back at Walt’s house, Cady’s recovering (she has a sweet, brief phone convo with Ferg which is a nice continuity touch), when everyone’s favorite Denver P.D. detective comes charging in with warrants. (At the same time, the reservation police descend on the Red Pony on Detective Fales' behalf.) He ransacks Walt’s home—reducing Cady to tears when he wants to take the tea chest with Martha’s ashes—and later Walt's office (making Ruby very perturbed!). He’s searching for evidence that Walt killed Martha’s killer, because now he has an eyewitness who identified Walt as having come around asking questions about Martha’s death.

Walt has other problems, though. He arrests Hector, determined not to let Vic hang for the attack on Ed. He tries to convince Hector to confess to it, because it’ll only boost his bad rep, whereas it could ruin Vic’s life. But when Walt tries to take Hector to the next county to turn him in—Henry stops him with a good old-fashioned horseback roadblock. Henry can’t let Walt do this, he says, because Hector’s the one who killed Martha’s murderer! DUN DUN DUN!! Henry flashback-narrates that when Walt returned with his back all flayed, Henry went to Denver, where he found and threatened the meth-head. Then, Henry sent Hector there to finish him off.

But not so fast! Hector butts in to say: Hey guys, wasn’t me. He beat up the meth-head (Miller Beck is his name, which is pretty fancy for a tweaker. Reminds me of something you’d call a good Portland micro-brew.), Hector says he didn’t kill him. Someone else finished him off!

Meanwhile, Vic gets a call to come to the hospital from Ed, but he’s gone when she arrives. He checked out already, leaving her a big ole’ note that he’ll see her soon. She calls Walt and fibs that Ed decided to drop the charges, so it’s all over and she can come back to work. But Walt tells her to take a day off. She’s positively jittering with nerves at the thought of not having work to distract her.

Walt and a still-distraught Cady (seriously, she’s been like sitting on the floor crying for actual HOURS at this point) have a little heart-to-heart and reminisce a bit about Martha. 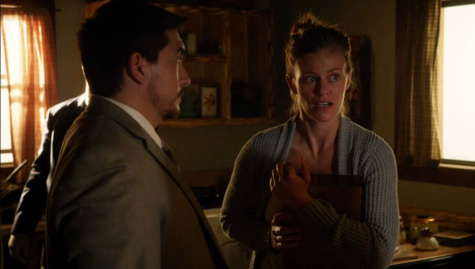 Cady finds it ironic (not in that Alanis Morisette way) that she got killed in a mugging, given that she always cautioned Cady about carrying only a little money in her purse and the rest in her boot. Walt suddenly remembers that Fales told him they found $700 in Martha’s purse…. File that under “things that make you go hmmm.”

And then, everything shifts into high gear! Detective Fales is lecturing Walt, telling him that he thinks he can do whatever he wants out here because the buck stops with him, and that the attitude is trickling down to his deputies…. We cut to Branch, literally treading dangerous ground as he strides across the reservation once more for answers. Then, it goes to an absolutely beautiful shot, where Katee Sackhoff is sitting in front of her door. She loads her gun and lifts her head, looking seriously ready to murder someone. She’s does bad-ass so well, that it’s almost an insult when they try to turn her into a quivering flower. (The writing for Vic this week is so much better than the Lifetime movie version we got last week. Here she’s still vulnerable and afraid at moments, but also capable and trying to take care of her business. This is the Vic we know and love.) Fales winds up his speech and says basically Walt can’t just do whatever he likes—and that the reservation police found teeth matching Miller Beck's at the Red Pony. Henry’s being arrested for murder as they speak.

Walt freaks out, hurling his desk over—all HULK SMASH! But he doesn’t have much time to worry about Henry, because his phone rings—it’s Branch lying on the ground, bleeding out on the reservation and whispering “Help Me, Walt.” Ohhh NOES! Walt rushes there and asks him who did this. Branch flashes back to a tribal warrior-looking fellow coming upon him while he was taking a sample of Ridges' ashes. Branch says, “A dead man.” (Guess maybe Ridge was onto something with that whole time travel thing.)

Walt then bends down and—man, Robert Taylor is kind of a beast—picks up Branch, slinging the guy over his shoulder! Actor Bailey Chase is no lightweight himself, so that’s pretty damn impressive. And it’s  sort of a very touching “Bring Him Home” Les Miserables moment… which is kinda fitting, because man this show has gotten pretty dark, eh? Everybody hurts, man. Maybe they should rename it Angstmire. (Tune in for Season 3 when they start offing puppies, everyone! With such good ratings, you can bet a drink at the Red Pony there's going to be a next season.)

Still, it’s a killer episode and sets up a lot of interesting developments. What’s gonna happen with Vic’s creepy stalker? Who really shot Branch? And what’s the deal with all that money in Martha’s purse? My theory: she watched too much Breaking Bad and decided to start an underground meth ring and was only in Denver for a drop-off. Too far fetched? As Walt rides off into the Wyoming landscape, hit the comments with YOUR best guesses for what’ll happen in Season 3.

And if that won't keep you busy enough, don't forget to enter our Sweepstakes to win all 9 books in the Longmire series of mystery novels by Craig Johnson!