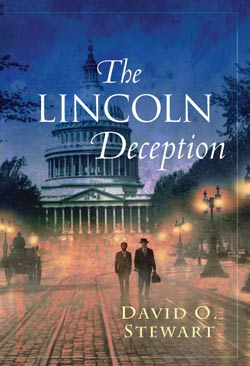 The Lincoln Deception by David O. Stewart is the prominent historian's debut novel, an elaboration upon a deathbed confession that unravels lingering mysteries behind the 1865 presidential assassination of Abraham Lincoln by John Wilkes Booth (available August 27, 2013).

Dr. Jamie Fraser, an Ohio MD, ministering to the aged John Bingham, prosecutor of the Lincoln conspirators, on his deathbed in 1900, hears a last confession of sorts.  Bingham tells Fraser of a secret that Mary Surratt told him in the days before her hanging, a secret that could shake the foundations of the nation. But he refuses to reveal to Fraser exactly what Surratt’s secret had been.  And with that, Fraser is launched on a quest to discover the truth behind Abraham Lincoln’s assassination.

David O. Stewart’s initial foray into fiction is an interesting effort for a couple of reasons. His main protagonist is in his mid to late thirties, born around the beginning of the Civil War, but too young to have any personal memories.  Somewhat like a Kennedy researcher born after 1963. His companion in this crusade is an African-American, a former baseball player, Speed Cook. And, as it should be in 1900, their alliance is an uneasy one.

Cook said he was planning to start a newspaper for colored people, one that would explain that they had choices, they had to stand up for their rights, no matter what the cost. Fraser protested that there weren’t any race haters in Harrison and Jefferson counties. It used to be so, Cook admitted, or it seemed so when he was a boy. But it didn’t seem so anymore.

“’Course, I’ve been baited by professionals,” Cook said. “Grandstands full of white people screaming at me, calling me names, threatening me, all because my skin’s darker than theirs—and not darker than all of them, neither. Hell, they even come down out of the stands after me.”

“I remember reading about that fracas, the one where the man got killed.”

Cook didn’t answer. Fraser looked up the hill on his side of the wagon. A few scrawny cattle cropped what looked like weeds.

“Jury said I was innocent,” Cook said. “Twelve white men on that jury, they all agreed I had the right to defend myself. That’s right.” Cook shook his head and snorted. “That’s why I carry a knife, always do. And that was in the North. Don’t even want to talk about down South.”

It’s a good pairing, though I wish Cook had been introduced earlier.  He provides a window through which race relations at the beginning of the 20th century can be seen clearly, and it’s not a pretty picture.  But more than that, Cook is a fascinating character, perhaps the best in the entire novel.

Stewart did a marvelous job in snagging a brief passage in a seldom-read biography of John Bingham and then blowing it up into a plot. That’s the mark of someone with a future in historical fiction. But Stewart also suffers from a malady that impacts a lot of historians-turned-novelists. Too much exposition that reads like a lecture:

The fourth conspirator close to Booth was the most unusual one, a widow ?fteen years older than the others. Mrs. Mary Surratt was not part of the killing. In Andrew Johnson’s words, she “kept the nest that hatched the egg” of assassination. Photographs showed her as sternly handsome, framed in dark hair. Her boarding house in Northwest Washington was the physical heart of the plot, the rendezvous site for Booth, Atzerodt, Paine, and her son, John Harrison Surratt. The facilitator’s role was familiar for her. Until the autumn of 1864, her tavern in southern Maryland served as a depot for Confederate spies and blockade runners. Indeed, her son, John, though only twenty- one, was a Confederate courier for the last two years of the war, carrying messages for spymasters in Richmond. Mrs. Surratt also stashed ri?es and whiskey for Booth for his ?ight through southern Maryland.

But in between the lectures, Stewart weaves a fresh and interesting tale that carries Fraser and Cook across the nation in pursuit of the truth, a journey with its share of dangers and thrills, that brings the reader in contact with various members of the Booth clan, Ulysses S. Grant’s widow, and a completely unexpected encounter in the climactic scene.