Earlier this week came news that Tom Cruise was sniffing around the part of Lee Child’s Jack Reacher, and the world was (understandably) upset.

Now’s the chance to weigh in on who should play whom before somebody who’s completely wrong for the part some actor squirrels his way into the role.

Harlan Coben’s thriller Tell No One has been optioned as a film with Ben Affleck attached to direct.

David Beck has rebuilt his life since his wife’s murder eight years ago, finishing medical school and establishing himself as a pediatrician, but he’s never forgotten the woman he fell in love with in second grade. And when a mysterious e-mail arrives on the anniversary of their first kiss, with a message and an image that leads him to wonder whether Elizabeth might still be alive, Beck will stop at nothing to find the truth that’s eluded him for so many years. A powerful billionaire is equally determined to make sure his role in her disappearance never comes to light, even if it means destroying an innocent man.

Which actors should play the lead? Hollywood, are you listening? 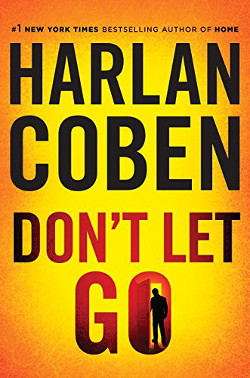 Don’t Let Go by Harlan Coben explores the big secrets and little lies that can destroy a relationship, a family, and even a town. The subtitle for Harlan Coben’s Don’t Let Go could be: “Just because you're paranoid doesn't mean they aren't after you.” Set in a suburban New Jersey familiar to fans of Coben’s Myron Bolitar series, the tragic… The Audio Publishers Association (APA) has recently announced their finalists for the 22nd annual Audie Awards competition—the premier awards program in the United States recognizing distinction in audiobooks and spoken word entertainment.  This year's awards will be presented at the Audie Awards Gala to be held on June 1, 2017, at the French Institute Alliance…