Queens are to Westeros as cooks are to kitchens – things work best when there is only one. Unfortunately for Westeros, we currently have two. And as “The Queen’s Justice” makes painfully clear, neither option looks all that great right about now. In one corner, you have Cersei Lannister – the wine guzzling, brother nuzzling psychopath with as much affinity for wildfire as she has antipathy for the livelihoods of literally everyone else in the world. And in the other corner, you have Daenerys Targaryen – the dragon taming, Baratheon blaming conqueror who, if current wartime strategies are any indication, might very well soon have more titles than allies. Neither queen has proven that they're suited to lead, but that doesn’t matter. The fighting has already begun. So, Westeros, ARE YOU READY TO CRUMBLE? 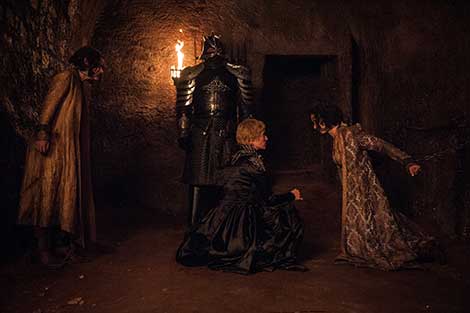 Say what you want about her methods, but Cersei Lannister gets shit done. Was there ever any doubt that she would get revenge on the Martells for Myrcella’s murder? Olenna Tyrell said it best when she told Jaime she underestimated just how far Cersei was willing to go to survive.

While revenge is Cersei’s signature dish, I did not expect her to turn the tides of the war so heavily this quickly. When she told Tycho – the Iron Bank of Braavos representative – that she’d have the crown’s debts paid off in a fortnight, I rolled my eyes and hoped Tycho would get out of King’s Landing before Cersei started torturing him too. But after her deft military maneuverings and the sack of Highgarden, Cersei should actually be able to rid herself of Robert Baratheon’s debts. The Iron Bank of Braavos might not make bets, but the higher Cersei climbs, the safer that bet seems to look.

Honorable Mention: Jorah Mormont for returning to Daenerys just when she needs his council the most.

After last week’s episode, I questioned the role left for Theon Greyjoy to play as we entered the home stretch of Game of Thrones. (Side note: please don’t remind me we only have ten episodes left EVER.) My problem with Theon was that he continues to get valuable minutes of screen time when it’s become clear he won’t have any lasting implications in the war to come with the White Walkers. Now, Daenerys will obviously have a role to play as the rest of the story unfolds, but being forced to watch her bicker with Jon Snow when we already know he’s telling the truth is straight up painful.

It’s an interesting characterization choice for the writers, as they’ve always defaulted to showing Daenerys in the brightest of bright lights. Need proof? Just count how many episodes we’ve had that feature a final scene where Daenerys one-ups a cheap villain while the interchangeable city dwellers cheer until the credits roll. No other character gets that kind of fanfare. That’s what makes the decision to paint Daenerys in a different hue so fascinating. I can guarantee I wasn’t alone in rolling my eyes when she groaned on and on about her “rightful” place on the throne. Daenerys and John’s actions this episode reminded me of a terribly generic rom-com where the cute girl and the cute guy get into an unbearably stupid fight because neither of them can think to have a proper, adult conversation and instead would rather broodily look off at the horizon. Literally.

Honorable Mention: Olenna Tyrell, for losing the game but not before one last mic drop.

Backstory of the Week: Battle in the Whispering Wood 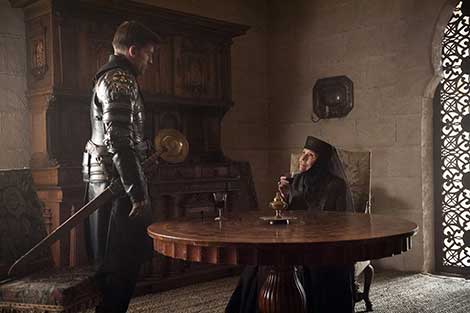 In an easy-to-miss line to Olenna Tyrell, Jaime Lannister tells us that the reason he knew to abandon Casterly Rock was because he learned his lesson from his battle in the Whispering Wood.

The Battle in the Whispering Wood occurred back in Season 2 where Robb Stark defeated Jaime Lannister and took him prisoner. But it wasn’t a simple battle, and the groundwork for Robb’s victory was laid long before swords first clashed.

Robb’s council had learned that the Lannister army had split itself into two fronts: one led by Tywin and the other by Jaime. Robb sends a small percentage of his army to attack Tywin, knowing defeat is all but guaranteed. Then, unbeknownst to Jaime, the Starks formed an alliance with the Freys and were granted access across the Trident, thus allowing Robb’s forces to take Jaime’s army by surprise. The Stark forces all but wiped out the 30,000 Lannister troops under Jaime’s control, and the effects of this battle would reverberate far and wide. As we all know, Jaime was captured, then let go by Catelyn. He befriended Brienne, then lost his hand. Tywin – after learning that half of his troops had just been killed – retreated into Harrenhal, which is where Arya first met Jaqen H’gar and learned about the Faceless Men. Needless to say, the Battle in the Whispering Wood was an important one, and its after-effects are still being felt today.

Sometimes I fantasize about winning the lottery, not so I can buy a new car or a new house but so I can pay off my student loans. So good on you, Cersei. Way to get out from under all that debt.