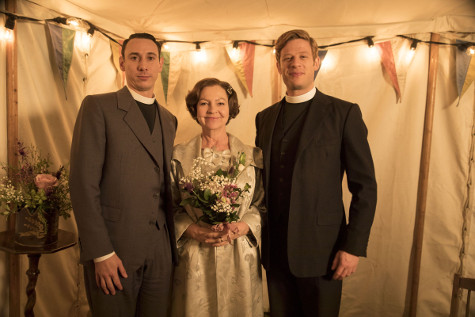 We conclude this series of Grantchester with preparations for a wedding, although maybe not the wedding you were expecting. It’s Mrs. Maguire (Tessa Peake-Jones) preparing to walk down the aisle with her gentleman friend Jack Chapman (Nick Brimble). Now that her ne’er-do-well husband Ronnie is dead and out of the way, she’s free to wed—although you might wonder why she’d bother. Marriages don’t work out well in Grantchester.

Which brings us to the giant, honking elephant-in-the-room of a question hanging overhead from last week’s episode: What is Sidney (James Norton) going to do about Amanda (Morven Christie)?

She’d given him an ultimatum: choose her or the church. He’s mulling it over. (Sidney’s “dog collar” is chafing. Is that a sign?)

Happily, he’s not resorting to alcohol for comfort as he’s done in seasons past. So, that’s something. This is, however, a situation that’s impossible to resolve to everyone’s satisfaction, and it’s hard to know which route the writers will choose to pursue. In fact, it’s a mystery.

There’s another mystery in this episode as well. Someone tried to abduct a small boy named Archie Reilly. A man in a brown hat who “had a scarf that was green and white with a bit of red,” Archie tells Sidney and Geordie (Robson Green). “I think he was a spy.” (Why, when Archie escapes from the man, he runs directly to the church instead of going home, is yet another mystery.)

Little boys’ imaginations being what they are, it’s possible that young Archie concocted this story. He’s a fan of detective stories, after all. Nevertheless, Sidney and Geordie set out to determine whether there really was a brown-hatted man pursuing Archie. They have their confirmation soon enough when Archie’s brother, Jacob, goes missing. There seems to be no doubt that Jacob was abducted by the same man who pursued Archie. Now, who could that man be?

“A troubled child is always the product of troubled parents,” says the boys’ schoolteacher (Sam Hoare, who’ll turn up in Endeavour soon). Thus, a visit with Archie’s parents reveals—and I know this will shock you—that their marriage is unhappy and at least one of them is involved in extramarital affairs.

Could Mr. Reilly (Neil Jackson from Sleepy Hollow) be involved in the abduction? How about Mrs. Reilly (Perdita Weeks from Penny Dreadful and The Tudors)? Mr. Reilly points a hysterical finger at their friendly neighbor Daniel Marlowe (Oliver Dimsdale), but Daniel is the object of Leonard Finch’s (Al Weaver) affection. We know he didn’t do it.

As always, the mystery plotline in Grantchester is an afterthought. It doesn’t really matter to us who abducted little Jacob; we don’t have much opportunity to become invested in these characters anyway. 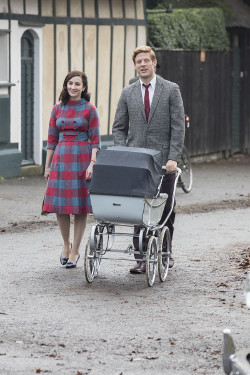 Judging by viewer comments on social media, the lack of emphasis on the mystery is Grantchester fans’ greatest complaint about the series. Second greatest is the perpetual hand-wringing over the relationship between Sidney and Amanda. Luckily, we see that resolved in this episode. (No spoilers in the comments, please!)

In fact, for the most part, this episode resolves all the main characters’ storylines. Even if we don’t know precisely what the future holds, we have a good idea of where it’s headed. Except for one thing: Is Grantchester calling it quits?

At the time of this writing, Grantchester’s future is a question mark, and no plans for a Season 4 have been announced. (These decisions usually have been made well before the season concludes in the U.S.) Robson Green even made some comments about the possibility of the series continuing with different actors. We’ll see what happens, but for now, the future of Grantchester is a mystery.