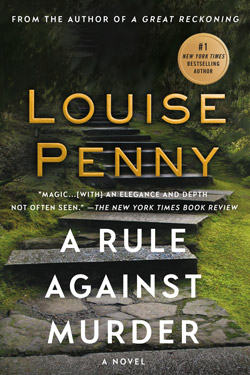 It was such an extraordinary thing to say it stopped the ravenous Inspector Beauvoir from taking another bite of his roast beef on baguette.

“You have a rule against murder?” he asked.

“I do. When my husband and I bought the Bellechasse we made a pact…. Everything that stepped foot on this land would be safe.”

It is the height of summer, and Armand and Reine-Marie Gamache are celebrating their wedding anniversary at Manoir Bellechasse, an isolated, luxurious inn not far from the village of Three Pines. But they're not alone. The Finney family―rich, cultured, and respectable―has also arrived for a celebration of their own.

The beautiful Manoir Bellechasse might be surrounded by nature, but there is something unnatural looming. As the heat rises and the humidity closes in, some surprising guests turn up at the family reunion, and a terrible summer storm leaves behind a dead body. It is up to Chief Inspector Gamache to unearth secrets long buried and hatreds hidden behind polite smiles. The chase takes him to Three Pines, into the dark corners of his own life, and finally to a harrowing climax.

Follow along with Doreen Sheridan as she cooks up “Homeade Lemonade” and “Tarte Poire Hélène” from A Rule Against Murder!