November 9, 2021
Amy Pershing’s latest Cape Cod Foodie mystery, An Eggnog to Die For, won a starred Kirkus Review for “a delightful sleuth, a complex mystery, and lovingly described cuisine: a winner for both foodies and mystery mavens.” Join Amy as she investigates the mystery of the enduring popularity of holiday homicide.

It is a truth universally acknowledged that mystery readers crave a little holiday homicide along with their eggnog. The holiday puzzler first caught on in 1936 with Mavis Doriel Hayes’s The Santa Klaus Murder. By 1938 Agatha Christie had jumped in with her hugely popular Hercule Poirot’s Christmas, which Robert Barnard called a “welcome interruption to the festive season.” Is that the reason why the Christmas murder mystery has become only more beloved over the past eighty-some years? Do readers need a break from all the good cheer? Or is it because mystery writers love writing Christmas crime? Or is it both?

As a writer of my own holiday murder romp, An Eggnog to Die For, I hesitate to plumb the psychology of my readers. (Mostly I just want to say thank you, thank you, thank you for buying my books.) But Barnard is right, I think, about a good old-fashioned murder being a welcome interruption to all the enforced Yuletide jollity.  I for one stand with John Mortimer’s beloved curmudgeon Horace Rumpole, who (in A Rumpole Christmas, no less) bemoans the season when you can’t  “call on a tobacconist’s for a packet of small cigars without being treated to a canned rendering of God Rest Ye Merry Gentlemen.”

However, I do think there is another, deeper reason why readers love holiday murder mysteries. I believe it is because they know the traditions and tropes of Christmas so well. They can identify. They have trimmed the tree. They have cooked the turkey. They have contemplated murder.  No, I’m kidding. Sort of. But it’s no accident that my novel begins with the immortal words of Chevy Chase as Clark Griswold in National Lampoon’s Christmas Vacation: “Can I refill your eggnog for you? Get you something to eat? Drive you out to the middle of nowhere and leave you for dead?”  We’ve all been there.  I’m just saying.

Enough armchair psychology.  What I do feel qualified to opine on, however, is why mystery novelists relish writing Christmas crime. And we do.  I have never enjoyed writing a book (and I love writing books) as much as I enjoyed writing An Eggnog to Die For.  I’d bet you anything Agatha Christie thoroughly enjoyed writing Hercule Poirot’s Christmas for, she wrote, readers who said they “yearned for ‘a good violent murder with lots of blood.’ ” It must have made a nice change for the Queen of Cozies. On the other side of the coin, I cannot help but think that Georges Simenon welcomed the chance in A Maigret Christmas to write his gentle, heartbreaking portrait of the childless Madame Maigret.  And look at P.D. James, who, with tongue firmly in cheek, begins her short story “The Murder of Santa Claus” (from her terrific short story collection Sleep No More) with: “If you’re an addict of detective fiction, you may have heard of me, Charles Mickledore. I say addict advisably … I’m no H. R. F. Keating, no Dick Francis, not even a P. D. James.” What stands out in these and other classics of the Christmas mystery genre is the sheer fun the authors are having.

Of course, there are other, more prosaic, reasons why mystery writers like writing a Christmas novel.  The holidays are perfect for revealing the best motives for murder: greed, lust, secrets, and/or revenge.  In the traditional holiday mystery, family and friends are conveniently trapped together, sometimes literally, for at least a few days, usually at the behest of a thoroughly nasty (and very rich) patriarch. Read Georgette Heyer’s A Christmas Party (originally published as Envious Casca) for the classic example of said patriarch getting the unexpected Christmas present he so richly deserves.

A huge snowfall is particularly helpful here, as J. Jefferson Farjeon first showed the rest of us in his 1938 Mystery in White.  And if you can’t trap them in a house, it’s helpful to have them all living in a small town like Louise Penny’s Three Pines, which she uses to great effect in her  Christmas contribution, A Fatal Grace. This enforced isolation over a number of days allows the writer time for personalities to be limned, tempers to rise, and the murder to be planned and executed. And we are grateful.

Also, the Santa costume is the best disguise ever for the would-be murderer. Which isn’t to say that you can’t kill off the guy in the Santa suit himself.  Many of us have.  I myself knock off a thoroughly unpleasant Santa in An Eggnog to Die For.  Here’s my heroine, professional foodie (and the world’s most reluctant YouTube star) Sam Barnes, finding a very dead Santa in a very hip restaurant:

It was only then that I realized that my heart was hammering and why. Next to the papers on the floor, just peeking out from behind the desk, was what looked very much like a boot. A big, shiny, black boot.

I moved forward to peer at the floor behind the corner of the desk. Sprawled on the worn linoleum, one hand still clutching a manila file folder, lay the Santa with a nose like a potato, his head neatly caved in at the temple. I crouched down and felt for a nonexistent pulse in a wrist that was already cooling.

Aghast, I stood and stumbled back to the front room, where the Martin groupie was still filming. I gripped the edge of the bar to keep my legs from folding underneath me like a rickety lawn chair.

“It’s Santa Claus,” I stammered with my usual eloquence. “Santa Claus is dead.”

Because, really, what’s Christmas without a dead Santa? 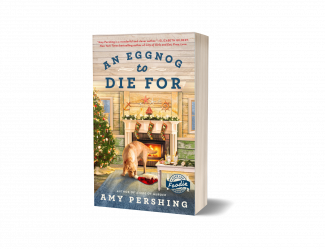 About An Eggnog to Die For by Amy Pershing:

Professional foodie Samantha Barnes has a simple Christmas list: a quiet holiday at home with her dog and a certain handsome harbor master; no embarrassing viral videos; and no finding dead bodies. Unfortunately she’s got family visiting, she’s spending a lot of time in front of the camera, and she’s just stumbled over the lifeless body of the town’s Santa Claus.

Plus, Sam’s plans for Christmas Eve are getting complicated. There’s the great eggnog debate among her very opinionated guests. There’s the “all edible” Christmas tree to decorate. And there’s her Feast of the Five Fishes prepare. Nonetheless, Sam finds herself once again in the role of sleuth. She needs to find out who slayed this Santa—but can she pull off a perfect feast and nab a killer?

Amy Pershing is a lifelong mystery lover and wordsmith who spent every summer of her childhood on Cape Cod. In her previous incarnations she was an assistant editor at Viking Penguin, a restaurant reviewer for Playbill magazine's Restaurant Reporter, and a journalist at the Rome (Italy) Daily American before eventually going on to lead employee communications at a global bank. A few years ago (with the final college tuition bill paid), she waved goodbye to Wall Street in order to write full time (and spend more time sailing on Cape Cod!). A Side of Murder is the first book in the Cape Cod Foodie mystery series featuring Samantha Barnes, a disgraced but resilient ex-chef and the world's most reluctant YouTube star. While Sam tries to balance her new job as the local paper's "Cape Cod Foodie" with her complicated love life, a posse of just-slightly-odd friends, a falling-down house and a ginormous puppy, she also discovers a new talent—a propensity for falling over dead bodies... and for solving crime.