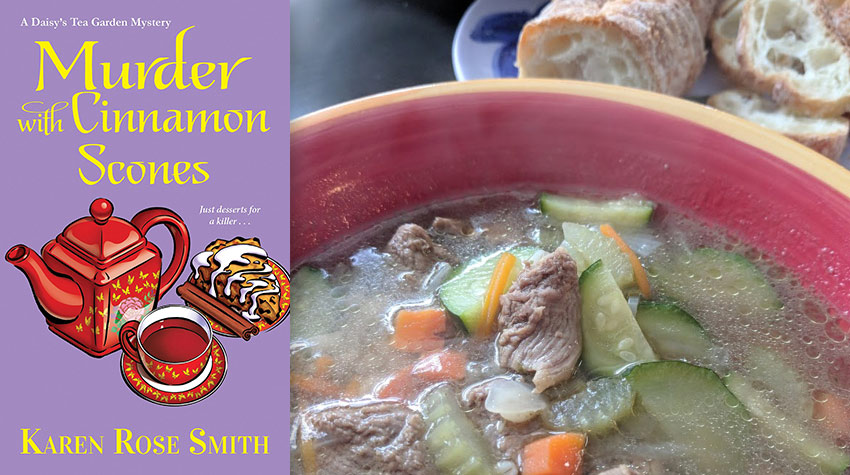 I have such a weakness for places that serve tea as a meal, so the restaurant featured in this second Daisy’s Tea Garden Mystery is just the kind of delightful place I wistfully imagine visiting, murders notwithstanding. Daisy Swanson is part-owner of her namesake tea garden with her beloved Aunt Iris, and business is thriving. She expects even more custom to arrive as their small town of Willow Creek, Pennsylvania, hosts a weekend quilting event in the January cold.

Her best friend and kitchen manager, Tessa Miller, has other concerns, however. Tessa has been dating the local gallery owner, Reese Masemer, and things have gotten pretty serious. But Tessa feels that Reese is hiding something from her, a suspicion confirmed in the worst way when Reese’s corpse is found near a covered bridge where Tessa occasionally goes to sketch. Tessa’s heartbreak is exacerbated by the fact that the local police detective, Morris Rappaport, considers her the prime suspect.

Determined not to let her best friend be sandbagged by an incorrect charge, Daisy dives into investigating—even as she juggles raising her teenage daughters by herself and dealing with the hot and cold attentions of two love interests. Her attempts to discover what Reese was hiding and whether that was what got him killed soon put her in the path of a murderer who won’t hesitate to kill again.

Karen Rose Smith pays a lot of attention to the relationships between the good people of Willow Creek, who each have their desires and conflicts explored in a way that is very relatable. From three generations of Daisy’s family to longtime residents of the town to newcomers trying to find their own ways, Ms. Smith recounts their travails with compassion and heart. This makes for a depiction of small-town life in Amish Country that is at once gentle and realistic—in the best traditions of cozy mysteries.

And in keeping with the best traditions of culinary cozies, Murder with Cinnamon Scones includes three tasty recipes. While the titular baked treats were definitely tempting, I was in the mood for the delicious soup Ms. Smith describes so well in the book: 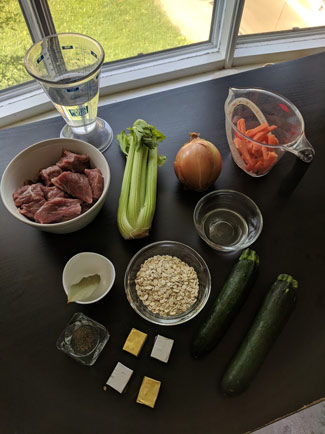 In soup pot, brown stewing cubes and onion in three tablespoons sunflower oil. Add chicken and beef broth, water, bay leaf, and pepper. Bring to a boil. Turn to simmer with lid on pot for 1 hour. Add carrots and celery. Simmer for 20 minutes. Bring soup to a boil and add zucchini and barley. Cook another 15 minutes at a low boil.

Serve with your favorite crusty bread… or scones! 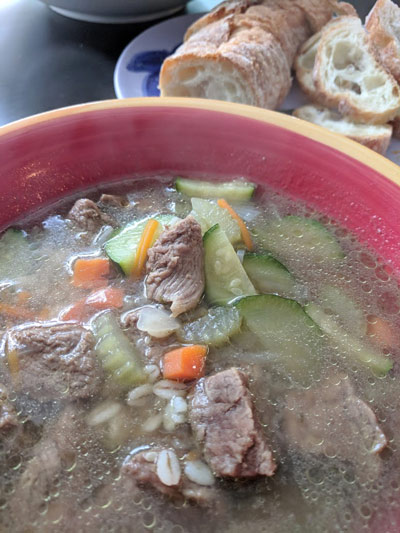 This was a super delicious soup, just as satisfying in the summer as it might be in the cold winter months that the book itself is set in. Note that I used bouillon cubes for the stock; I don’t think that affected the taste of the dish negatively. The meat and vegetables all came out tender and tasty following the cooking instructions whose specificity I very much appreciated. With slices of baguette, this beef barley soup made for a perfect, light summer meal. I’ll likely add more barley the next time I make this, which will probably be sooner rather than later. This is a terrific recipe to add to my regular repertoire, and I’m looking forward to enjoying it all year round.

Next week, we travel to my metropolitan area to enjoy a delectable dessert. Do join me!