Cooking the Books: The Masquerading Magician by Gigi Pandian 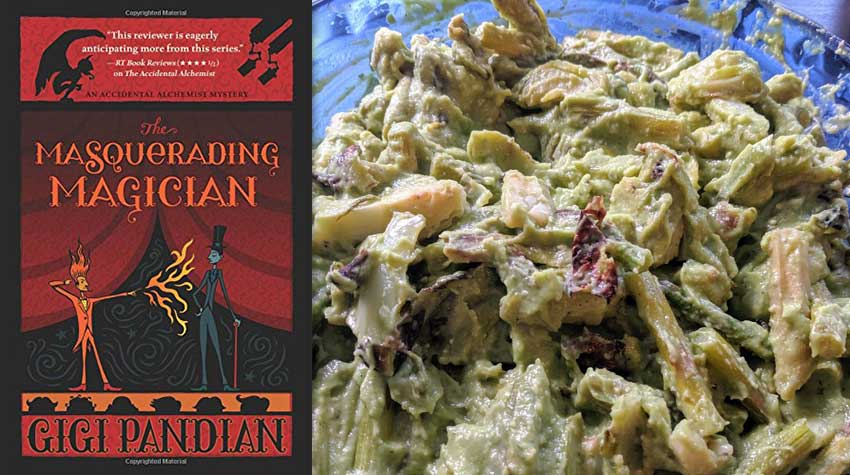 Accidental alchemist Zoe Faust has found a stopgap for her living-gargoyle-roommate Dorian Robert-Houdin’s problem. Whatever alchemy—or backward alchemy—that originally brought him to life seems to be wearing off, slowly turning his body back to stone and trapping his soul within the coffin that was once his flesh. The Tea of Ashes Zoe has discovered from the book that Dorian’s father used to animate him can hold off the re-petrification, but it comes at the cost of Zoe’s own health, as all backward alchemy does to its caster.

So when their teenage friend Brixton swears that a magician who has recently come to town must be an alchemist too, they’re almost desperate enough to believe him. Trouble is Brixton has a habit of seeing alchemy in everything since he stumbled across their secret.

Zoe has enough on her hands with researching the book via less dubious channels, but when she and Dorian decide to visit the magicians anyway, they stumble across a decades-old secret that they quickly learn someone would kill to keep. Zoe and Dorian must deal with duplicitous prestidigitators, a blind recluse, and conspiracy-theorist treasure hunters in order to find an actual alchemist who might finally be able to help cure Dorian.

This book definitely made good on the promise of the first in the series, even if I felt that it still had a bit of an issue with meandering, mirroring Zoe’s own bad conversational habit that she attempts to manage in this volume. I did very much enjoy her burgeoning relationship with Max, though the star of the show—as always for me—is Dorian, the French gourmet chef trapped in a decaying body. Brixton’s teenage friends were also further developed, as was his relationship with his stepfather, and it was really neat to meet more of Zoe’s friends. Endearing cast aside, it was also pretty cool to learn more about alchemical codes and practices and the different kinds of known alchemy.

Speaking of alchemy, there’s the expected focus on turning vegetables into gourmet meals in this culinary cozy, as Zoe herself is vegan, to Dorian’s chagrin. Gigi Pandian includes three healthful vegan recipes, and I decided to try out this vegetable side after the success with the butternut squash in the last volume: 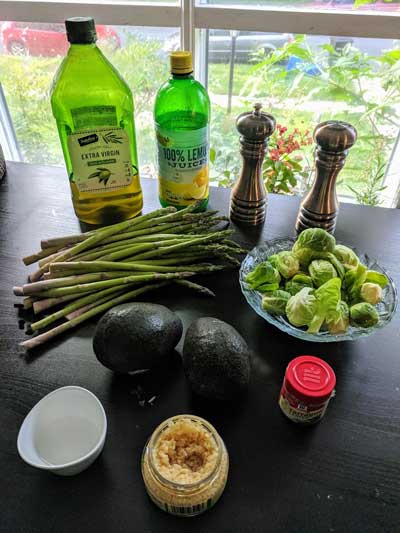 1 large avocado (or two small ones), peeled and pitted

2 tbsp water (more or less, depending on desired thickness

Preheat oven to 425 and prepare a baking sheet with parchment paper. Cut off the tough ends of the asparagus, and cut the remaining spears into 2-inch pieces. Quarter the Brussels sprouts. Toss the vegetables with 2 tsp. Olive oil, then spread evenly on the prepared baking sheet. Roast for approximately 15 minutes.

While the asparagus is cooking, prepare the sauce. Put all the sauce ingredients into a blender and puree until creamy.

Toss the roasted vegetables with sauce. 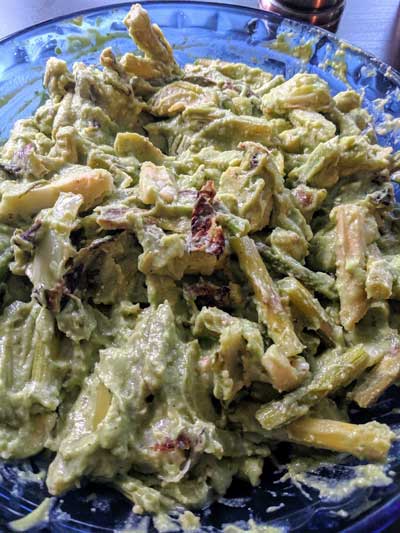 So, apparently, I don’t know how to tell if an avocado counts as small or large, as I used two of what I thought were medium-sized avocados in this dish (I love avocado, so I figured the more the merrier) and found that it was just too much and too overpowering. The roasted vegetables themselves were lovely, but I felt like I was slathering them more in a guacamole than a sauce. Of course, it was all very tasty, but it wasn’t quite the hit that last week’s dish was. While it was a perfectly adequate side dish, I’d likely go a lot easier on the avocado next time.

Next week, we make a quick trip to Paris before settling back in Portland in the third book of the series and whipping up a vegan dessert. Do join me!