Cooking the Books: Flipped for Murder by Maddie Day 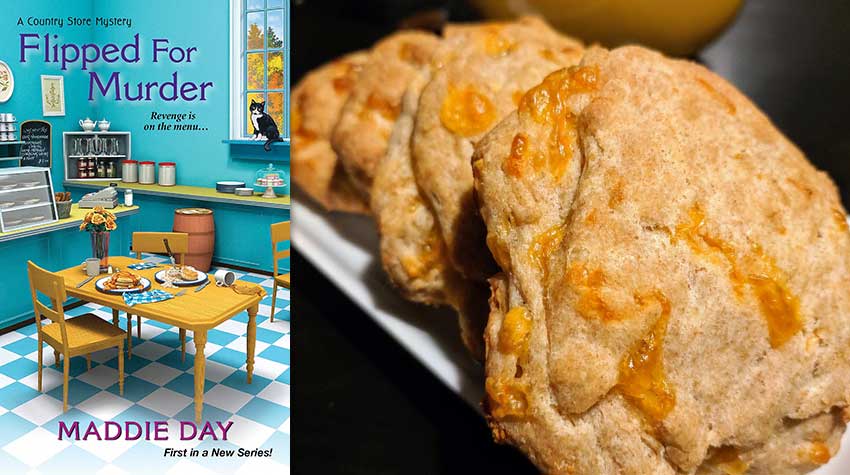 It’s opening day for country store and restaurant Pans ‘N Pancakes, and owner Robbie Jordan is understandably nervous. Since moving from California to her mother’s hometown of South Lick, Indiana, she’s been driven to make a success of the business she’s practically built from scratch, hurdling all sorts of obstacles with aplomb. Now, with the help of her Aunt Adele and her friend and dessert baker, Philostrate, she enjoys a busy launch day that bodes well for future earnings—until a corpse is found a few blocks away with one of Robbie’s signature biscuits stuffed into the dead woman’s mouth.

Stella Rogers was the longtime assistant to the mayor, regardless of who held the position, and thus a big wheel in South Lick life. While this meant that she knew everyone’s secrets, her less-than-winning personality did not make her the more popular for it. So when she’s found dead in her own home, the clear victim of foul play, there’s no shortage of suspects—even though all the evidence points very clearly towards Robbie.

With the help of her real estate lawyer and possible love interest, Jim Shermer, Robbie sets about investigating who could possibly want to frame her for causing Stella’s death. It’s bad enough that the enthusiastic reception her store received wanes considerably in light of her being under suspicion of murder, but a whole new set of problems afflicting the PNP has Robbie wondering whether she’s the deliberate target of sabotage. Even more distracting, though far more welcome, is information that comes to light during the course of her sleuthing about the father Robbie grew up not knowing.

All this comes together for a debut that kicks off another winning series from Maddie Day. I’ve loved every book I’ve read of hers so far, in large part due to the wonderful, warm characters and Ms. Day’s commitment to diversity. I even like the nascent love triangle going on here and very much appreciate the biking scenes, which are encouraging me to get out on my bike more this summer!

There were four recipes included, and I decided to try out Robbie’s signature side: 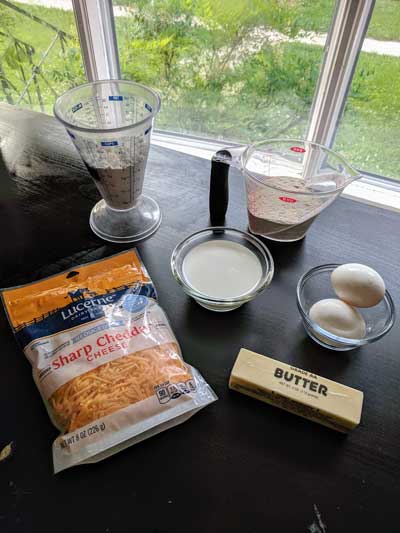 Cut butter into the flour mix, until mostly pea-sized pieces. Make a well in the middle and add the eggs and milk, mixing with a fork in the well. Add the cheese and stir all with a fork, until liquid and cheese are just blended with the flour. Do not overmix.

Sprinkle some flour on a flat surface and on the dough. Scrape the dough out of the bowl onto the surface, rubbing flour around the inside of the bowl until clean.

Lightly knead the dough until it comes together. 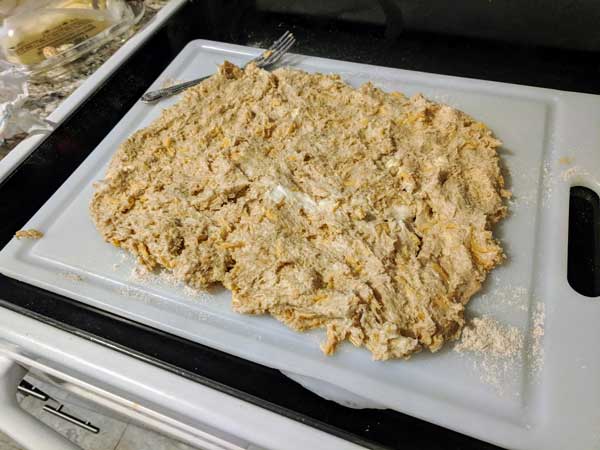 Flour a rolling pin. Roll the dough to a half-inch thickness. Fold in thirds. Roll, fold, and repeat several times. 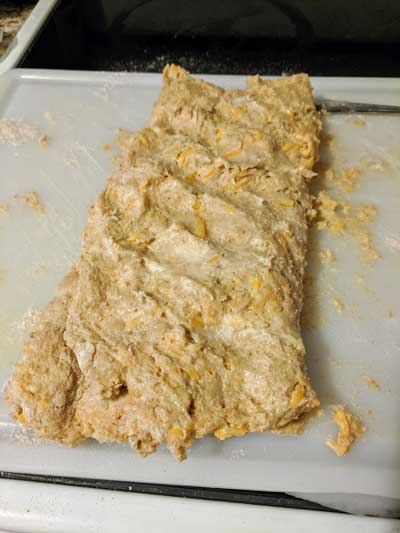 Cut with a 2-inch biscuit cutter or drinking glass and position on a baking sheet. You don’t need more than half an inch in between. Bake for about ten minutes or until risen and golden brown on top. 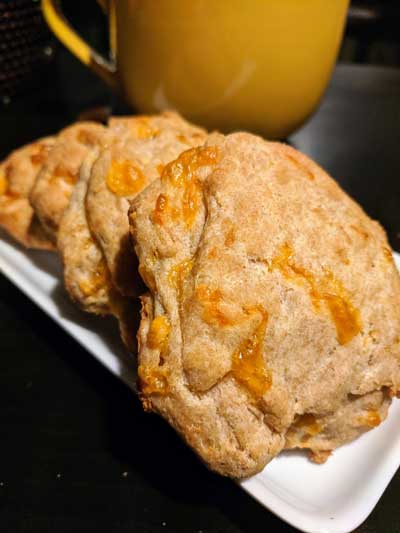 I actually made two batches of this—one with a cup and a quarter of sharp cheddar and the other with a cup and a half of pepper jack—and my opinion was the same both times: needs more cheese. Apart from that, this is certainly a much healthier option than your standard biscuit recipe, what with the inclusion of whole wheat flour. The biscuits themselves are light and a bit on the bready side but quite tasty. I do regret not trying out the included recipe for miso gravy, as Ms. Day describes it to mouthwatering effect throughout the text, but it was a bit more than I was prepared to take on at the time. Let me know if any of you readers try it out at home, though!

Next week, we check out the latest in the series and continue to make use of the bag of whole wheat flour I had to buy for this week’s recipe. Do join me!