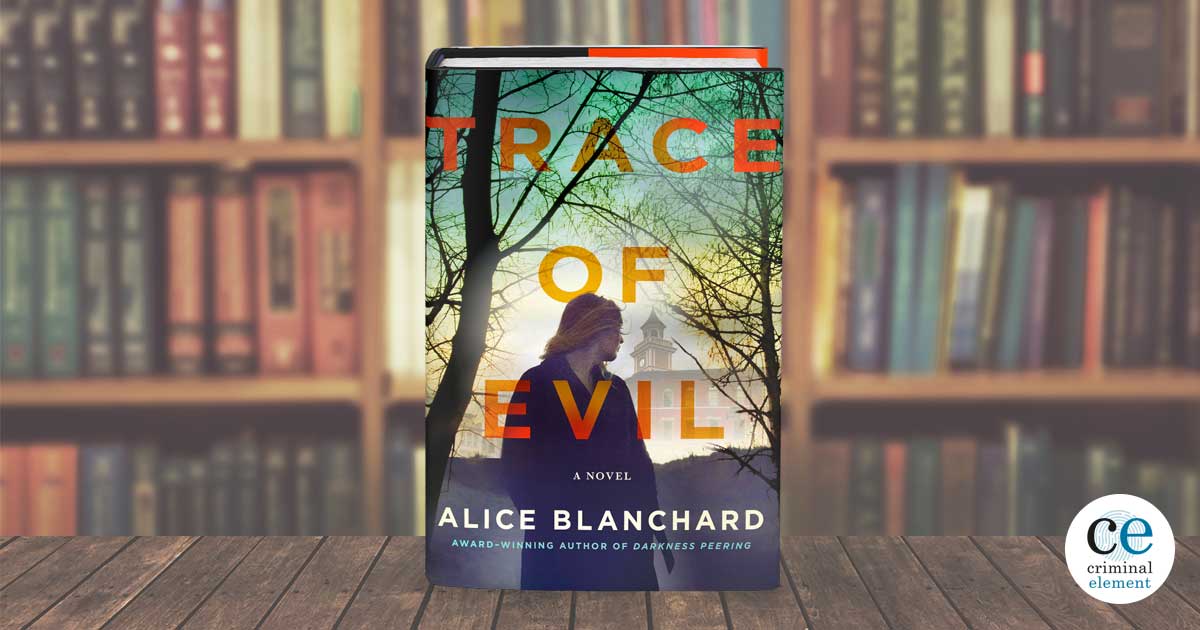 I’ve been a huge fan of Alice Blanchard since I read her smashing 2003 thriller The Breathtaker, and she just keeps getting better and better. Trace of Evil, the first in a new series, introduces Natalie Lockhart, Burning Lake, New York’s newest detective. It’s a small force, so many tasks are shared by the officers, and they’re crosstrained to handle many different crimes. They’re also a close-knit group. Many have known each other since they were children, and that’s why Natalie’s first murder case is so hard to swallow. It also doesn’t help that the murder falls on the 20-year anniversary (or deathiversary, as Natalie calls it) of the murder of Natalie’s sister, Willow. Natalie and her other sister, Grace, meet every year at Willow’s grave to remember her and pay their respects, and it’s a weight that Natalie carries with her when she meets her colleagues at a bar that night. Natalie’s fellow detective, Brandon Buckner, has a bit too much to drink, so Natalie offers to drive him home. That’s when things get bad. Brandon tries multiple times to call his wife Daisy during the drive, but she doesn’t answer. When they reach their house, they discover Daisy lying dead on the kitchen floor in a pool of her own blood. Brandon is devastated.

Brandon dropped to his knees as he tried to suck some relief out of the air. He crawled across the tiled floor toward his wife, and before Natalie could secure the scene, he was cradling her limp body in his arms. His mouth moved fishlike as he tried to produce a sound, but nothing came out. He sat there rocking his dead wife back and forth, silenced by grief, while Natalie stared at the bright spatter of blood arcing across the refrigerator and kitchen cabinets.

Daisy is a beloved teacher at the local high school, known for her ability to help troubled students turn their lives around. Why would anyone want to kill her? She was also three months pregnant, and by all accounts, she and Brandon were looking forward to the arrival of their first child after multiple miscarriages. When Natalie discovers that Daisy has had some problems with, and been threatened by, a particular student named Riley Skinner, Brandon takes off after the kid, resulting in a confrontation that ends with Riley in a coma. Natalie has her hands full with the confounding case, and she’s also been working on the cold case of the Missing Nine. Over the last 25 years, nine transients went missing under suspicious circumstances, and the FBI even became involved at one point, but the case has alluded authorities at every turn.

Alice Blanchard on Five Authors Who Got Too Close…

That case, however, is on the backburner while Natalie chases leads in Daisy’s case. The first place she looks is within Riley’s circle of friends, but she makes sure to expand her search to his classmates, which includes Natalie’s fifteen-year-old niece Elle. Natalie gets the distinct feeling that some of these kids, especially the haughty India Cochran, one of Elle’s closest friends who Natalie has known since she was a baby, aren’t being completely forthcoming. Natalie’s suspicions are heightened further when she catches India and others performing a witchcraft ritual in an abandoned cabin where Riley was known to sell drugs. When Natalie discovers that Daisy may have been keeping a few secrets of her own, she knows that the fallout could be explosive, and it’s not long before new leads in the case of the Missing Nine come into shockingly clear focus.

Blanchard packs her new series opener with a pervasive eerie atmosphere that will suck you right in. After all, Burning Lake has a history of witchcraft that attracts tourists from all over, and as Natalie points out, there’s not many girls that she knows, including herself, that haven’t been pulled in to the delicious allure of witchcraft at some point in their lives. Then there’s the attack that Natalie experienced as a child. It still haunts her dreams, or more accurately, her nightmares. It happened when nine-year-old Natalie took a shortcut through the woods in early autumn.

Eventually, she came to a clearing, where she spotted a boy about Willow’s age kneeling on the muddy bank of a stream. He wore jeans and no shoes. He’d taken off his T-shirt and wrapped it around his head like a voodoo mask, with a slit for the eyes, two glints inside a smeary darkness. His naked torso was painted with mud. He held a stick in his hand—a sturdy branch with a pointed tip—and he kept poking the dead raccoon with it, lancing its bloated belly and stabbing deeper and deeper until the intestines gushed out.

Natalie tried to hide, but gave herself away when she screamed, and he attacked her, only releasing her when she bit him hard enough to draw blood. The police never found the boy, or the dead raccoon, but Natalie will always remember her terror.

Blanchard is an impeccable stylist, fully utilizing her setting and the people in it to weave a tale that seems as much dark fairy tale as modern police procedural and balances multiple storylines with ease. Natalie jumps off the page and is just the kind of heroine I love: smart, determined, and empathetic, and her supporting characters are vividly realized as well. There’s also a frisson of possible romance between Natalie and her lieutenant, Luke Pittman, who she’s known since they were children. This twisty and terrifying thriller has something for just about everyone, and I’ll be first in line for the next Natalie Lockhart novel.

Take a GIF-Guided Tour of Trace of Evil!