The Last Mile by David Baldacci

Convicted murderer Melvin Mars is counting down the last hours before his execution—for the violent killing of his parents twenty years earlier—when he's granted an unexpected reprieve. Another man has confessed to the crime.

Amos Decker, newly hired on an FBI special task force, takes an interest in Mars's case after discovering the striking similarities to his own life: Both men were talented football players with promising careers cut short by tragedy. Both men's families were brutally murdered. And in both cases, another suspect came forward, years after the killing, to confess to the crime. A suspect who may or may not have been telling the truth.

The confession has the potential to make Melvin Mars—guilty or not—a free man. Who wants Mars out of prison? And why now?

But when a member of Decker's team disappears, it becomes clear that something much larger—and more sinister—than just one convicted criminal's life hangs in the balance. Decker will need all of his extraordinary brainpower to stop an innocent man from being executed.

Tucker Wayne’s past and his present collide when a former army colleague comes to him for help. She’s on the run from brutal assassins hunting her and her son. To keep them safe, Tucker must discover who killed a brilliant young idealist—a crime that leads back to the most powerful figures in the U.S. government.

From the haunted ruins of a plantation in the deep South to the beachheads of a savage civil war in Trinidad, Tucker and Kane must discover the truth behind a mystery that leads back to World War II, to a true event that is even now changing the world . . . and will redefine what it means to be human.

With no one to trust, they will be forced to break the law, expose national secrets, and risk everything to stop a madman determined to control the future of modern warfare for his own diabolical ends. But can Tucker and Kane withstand a force so indomitable that it threatens our very future?

Design for Dying by Renee Patrick

Los Angeles, 1937. Lillian Frost has traded dreams of stardom for security as a department store salesgirl . . . until she discovers she's a suspect in the murder of her former roommate, Ruby Carroll. Party girl Ruby died wearing a gown she stole from the wardrobe department at Paramount Pictures, domain of Edith Head.

Edith has yet to win the first of her eight Academy Awards; right now she's barely hanging on to her job, and a scandal is the last thing she needs. To clear Lillian's name and save Edith's career, the two women join forces.

Unraveling the mystery pits them against a Hungarian princess on the lam, a hotshot director on the make, and a private investigator who's not on the level. All they have going for them are dogged determination, assists from the likes of Bob Hope and Barbara Stanwyck, and a killer sense of style. In show business, that just might be enough.

Check out an excerpt from Design for Dying!

By day, Judith Rashleigh is a put-upon assistant at a prestigious London art house.

By night, she’s a hostess at one of the capital’s notorious champagne bars, although her work there pales against her activities on nights off.

Desperate to make something of herself, Judith knows she has to play the game. She’s transformed her accent and taught herself about wine and the correct use of a dessert fork, not to mention the art of discretion. She’s learned to be a good girl. But when Judith is fired for uncovering a dark secret at the heart of the art world—and her honest efforts at a better life are destroyed—she turns to a long-neglected friend. A friend who kept her chin up and back straight through every slight: Rage.

Feeling reckless, she accompanies one of the champagne bar’s biggest clients to the French Riviera, only to find herself alone again after a fatal accident. Tired of striving and the slow crawl to the top, Judith has a realization: If you need to turn yourself into someone else, loneliness is a good place to start. And she’s been lonely a long time.

Daughter of Albion by Ilka Tampke

Britain, AD 43: the dark cloud of the Roman Empire is gathering on the horizon.

A baby girl is abandoned on the doorstep of the Tribequeen’s kitchen. Cookmother takes her in and names her Ailia. Without family, Ailia is an outsider in her village, forbidden from marriage and excluded from learning. Despite this, she grows up an intelligent and brave young woman, serving the Tribequeen of her township until the day when an encounter with an enigmatic man named Taliesin leads Ailia to the Mothers, the tribal ancestors, who have chosen her for another path.

Ailia’s growing awareness of her future role as the tribal protector and her relationships with the two very different men she loves will be utterly tested by the imminent threat of Emperor Claudius preparing to take the island. 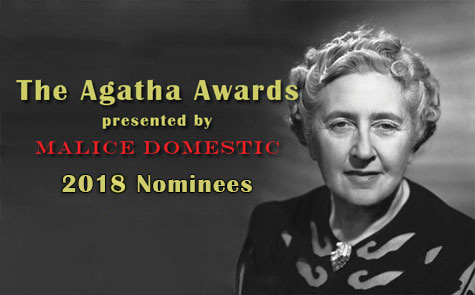 Malice Domestic—an annual convention held in Washington, D.C., honoring the best of the traditional/cozy mystery genre—has announced the nominees for 2018's Agatha Awards. Loosely defined as “mysteries which contain no explicit sex or excessive gore or violence,” the Agatha Award salutes the books best typified by the works of Agatha Christie. This year, the annual… The Mystery Readers International have announced the nominees for the 2017 Macavity Awards. The Macavity Award—named for the “mystery cat” of T. S. Eliot's Old Possum's Book of Practical Cats—is an annual award celebrating the year's best in the mystery genre. Design for Dying by Renee Patrick is the 1st book in the Lillian Frost & Edith Head series, nominated for an Agatha Award for Best First Novel. From now through June 5, 2017, get a digital copy for only $2.99! Read Doreen Sheridan's review of Design for Dying! Los Angeles, 1937. Lillian Frost has traded…

Every Wednesday, we here at Criminal Element will put together a list of Staff Picks of the books that published the day before—sharing the ones that we are looking forward to reading the most! This week brought some familiar faces and stunning newcomers to the table! Kent Lester published a haunting debut novel, David Baldacci…