Westworld 2.04: “The Riddle of the Sphinx” Episode Review 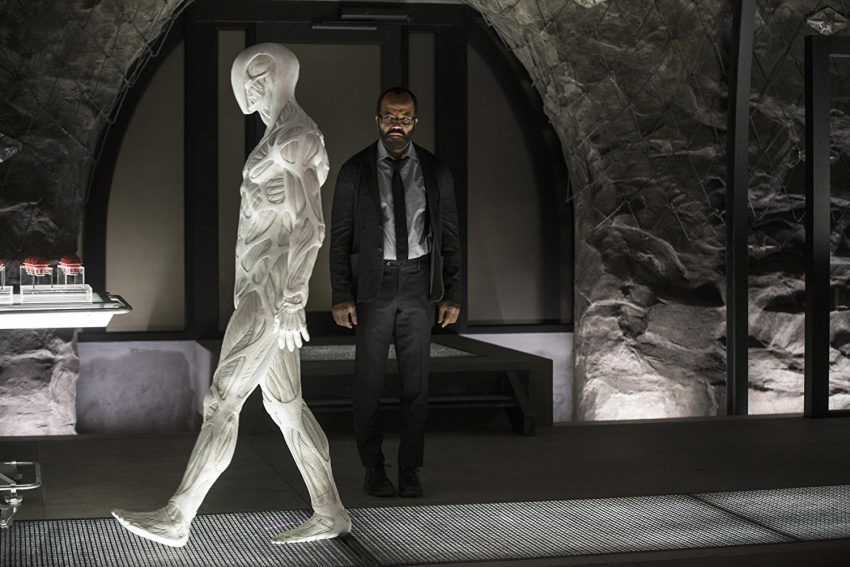 This episode could easily have been named “The Riddle of Time” since it can be a head-scratcher trying to pinpoint where we are in the narrative—past, present, or past-past—as it jumps back and forth through a series of plotlines. Satisfaction is served up, though, as several major threads begin to tie into one another.

Clementine (Angela Sarafyan) has dragged Bernard (Jeffrey Wright) to a cave entrance and left him there with a rifle. Inside, he finds Elsie (Shannon Woodward) chained up and obviously distrustful of him since he was the one who forcibly brought her there and shackled her up in the first place. He releases her, but he’s going into shutdown mode. She decides to help him, mainly because she wants answers. I’ve always admired Elsie’s committed, no-bullshit approach, and I’m happy to see her return.

Bernard dredges up a memory that there is a facility through the cave where he can be fixed, and he believes Ford had Clementine bring him there for a purpose. The facility is part of a Delos project—one that Ford was likely against—and inside the lab, everyone has been killed. Feeling a bit on edge, Elsie shoots one of those blank-faced drones despite Bernard’s mild protest that it won’t hurt her if she isn’t aggressive. He recalls something about watching the guests and that the lab was not for making hosts but to 3D print these small, red orbs. He had even pocketed one, unleashing all kinds of death and destruction in the lab—but that comes later despite that it technically happened earlier.

After Bernard is fully restored, he notes that the encryption code Elsie has been trying to decipher matches what he found in Peter Abernathy’s (Louis Herthum) head. When they hear a noise coming from behind a vault door, Elsie wants to open it. Again, he tries to mildly discourage her, but she refuses to listen. Then, somewhere in his squirrely mechanized brain, Bernard figures out that he’s not really there with Elsie because his memories are adrift, as she confirmed at one point, but it’s a bit confusing as to exactly when that occurred—the here and now or hitherto.

Remember the unnamed woman from last week? The one who survived a tiger attack and a plunge over a cliffside into the water. The one who was captured by Ghost Nation warriors. Well, it turns out she actually does have a name, but we’ll get to that soon.

For now, we pick up her story in the forest sitting next to Stubbs (Luke Hemsworth), their hands bound, along with other captive park guests. When he reassures her that a protocol is in place to get them out, she retorts that she’s not looking to get out—meaning she has no intentions of leaving the park. Hmm. Later, as they are being escorted away in the night for final judgment by their captors, she manages to escape once again—not as convincingly this time—leaving poor Stubbs to fend for himself. Side note on Stubbs’ experience: he’s picked out of the lineup and held with a knife to the throat. The tribal leader Akecheta (Zahn McClarnon) says to him, “You live only as long as the last person who remembers you.” Then, *slice* but no blood, and when he turns around, everyone is gone. Could it be that Stubbs is a robot and, like Bernard, his memories are a swirly jumble?

The Man in Black (Ed Harris) comes to railroad tracks being built in the wrong direction—with live bodies as railroad ties—so he decides to change course and head to Lawrence’s (Clifton Collins Jr.) hometown. A Ford diversion, according to the life-long park guest. In Las Mudas, he and Lawrence are ambushed by Major Craddock (Jonathan Tucker), who has the entire town under siege and demands they give up the stash of stolen weapons.

The Man in Black takes a big gamble and faces off against Craddock and his men, freeing Lawrence and family while remembering the moment of his own wife’s suicide. It makes you think that the old sourpuss has developed a soft spot for the family man Lawrence, leaving a bit of a warm fuzzy. But later, when Lawrence’s daughter (Izabella Alvarez) calls out the Man in Black as a bad seed, he affirms there were no heroics on his part and tells her he’s just playing the game to maximum potential to get to the end. Pawns be damned. She claims he still doesn’t get it and leaves him with a cryptic message from Ford: “If you’re looking forward, you’re looking in the wrong direction.”

James Delos (Peter Mullen) spends his days in an apartment-like controlled setting, puttering around to keep busy until William shows up each day and asks a series of repetitive questions in an effort to establish a “baseline.” Even though it takes half the episode to reveal that the company has been working on a clone of the head honcho, it’s pretty clear early on that this isn’t the same James Delos. It seems the investment company’s plan was to take Robert’s and Arnold’s work one step further into cybernetics—a cross between man and machine. As the decades roll on and William has aged, he comes to the conclusion that the project has failed—people can’t live forever. He leaves James to degrade rather than incinerate this latest incarnation that has made the furthest progress—which will end up a mistake. But now we have some solid ideas of what James’s true interest in the park had been and, perhaps, even why they were collecting guest DNA; they were looking for that ever-elusive “I wanna live forever” miracle.

Btw, the noise that Elsie wanted to check out, that was Delos in his unit. He didn’t fully degrade, but how long has he been wandering about—days, weeks, months? After Bernard knocks him down, Elsie incinerates the “devil.” And near the end, we again catch a glimpse of that devious side of Bernard. But is it programmed or of his own free will?

We don’t catch up to the unnamed woman until the very end of the episode when the Man in Black is riding the open fields with Lawrence and crew into the sunset and her silhouette on horseback comes into view. At first, it plays as if it’s Delores/Wyatt (Evan Rachel Wood), but when the camera shows her face, the unnamed woman says to the Man in Black, “Hi, Dad.” So, I stand corrected; she is important, and we have a whole new twisty thread happening here—a daughter’s revenge tale. And it sounds like Emily, going by Grace (Katja Herbers), is possibly playing the game for keeps against her estranged father.