Summer is right around the corner, and how better to pass the time than with some reads set in exotic locales or, just as fun, on the beach? Whether you’re looking for something light and breezy or a walk on the darker side of summer, no worries, we’ve got you covered!

If it’s a light, fun read you’re looking for, I have a few recommendations that  might just fit the bill.

Final Sail by Elaine Viets, the 11th novel in her popular Dead-End Job series (one of my faves), finds P.I. Helen Hawthorne going undercover as a stewardess on a private yacht bound for the Bahamas, leaving her husband (and business partner) Phil, back on dry land to deal with a gold digger who may have killed her husband. Things never get too heavy in this funny and heartfelt series, and the author’s sympathetic coverage of service industry jobs and those brave folks that tackle them is always a pleasure.

Island Blues, the second Sabrina Dunsweeny mystery by Wendy Howell Mills has Sabrina moving to a tropical island to start anew, but when the town council offers her a job as the island ombudsman and they want her to investigate a recent series of burglaries, she soon finds out that murder may be on the menu in her new tropical paradise. The witty and sweet Killer Honeymoon by G.A. McKevett follows plus-size private eye Savannah Reid and her new husband Dirk Coulter as they head to Santa Tesla Island for their honeymoon. This marriage has been a long time coming and they’re determined to soak up the sun, and each other at their tropical retreat, but when a woman is shot to death on the beach, right outside their door, they find themselves sucked into the hunt for a killer.

Savannah Breeze by Mary Kay Andrews (an Edgar Award nominee) takes you on a wild roadtrip to Fort Lauderdale with Bebe Loudermilk,  a southern belle who plans to get her revenge on a con man who fleeced her of nearly everything she owns.

If something set in Scotland is your cup of tea, look no further than Aunt Dimity and the Deep Blue Sea by Nancy Atherton. This installment of the beloved series finds Lori Shepard on her way to the Scottish coast after a series of death threats, and when a skull washes up on the beach, she’ll need to call on the aid of her ghostly Aunt Dimity. This one’s a crowd pleaser, for sure.

Heading out of cozy territory, you can’t go wrong with Getaway by Lisa Brackmann. Michelle Mason is in sunny Puerto Vallarta, hoping to escape, if only for a while, the mound of debt that her recently deceased husband left her with. Trouble soon finds her, however, in the form of the mysterious, and sexy, Daniel, who’s everything her husband wasn’t. Unfortunately, it’s soon evident that he’s involved in something very dangerous, and Michelle finds herself in a world of intrigue, and murder.

The Island, by the prolific Heather Graham has her protagonist Beth Anderson on vacation in Calliope Key, with her 14-year-old niece, Amber. Their vacation is cut short abruptly when they discover a human skull on the beach. This one’s also got plenty of sizzling romance if you like your thrillers with a little bit of spice. Another fun series is the Underwater Investigation series by Kathy Brandt, especially Swimming with the Dead featuring Hannah Sampson, head of Denver Homicide’s Dive and Recovery Team. She heads out to the British Virgin Islands to find out how an expert diver got himself killed in the wreckage of a cargo ship.

For more island intrigue, you can’t go wrong with The Fallen by Jassy Mackenzie, featuring P.I. Jade de Jong. When Jade invites her lover on a diving holiday in St. Lucia, she hopes they’ll be able to rebuild their failing romance, but instead finds one of the resort’s dive instructors stabbed to death.

And for something with a bit of literary flair, you might try The Goat Woman of Largo Bay by Gillian Royes which is the first of a series featuring Eric, a bar owner from the states and his right hand man and bartender Shad. When a mysterious woman turns up in their Jamaican fishing village, she turns things upside down in more ways than one. Another not-to-be missed title in this vein is Evil In All Its Disguises by Hilary Davidson.  Travel writer Lily Moore heads to Acapulco for a press junket and is all set for sun, surf, and plenty of margaritas. Of course, things don’t quite turn out that way.

Last, but certainly not least, we go from literary to hard-boiled, and unsurprisingly, a few titles from Hard Case Crime dominate my list. Up first is Baby Moll by John Farris. Farris is mostly known for his horror, but he turns to noir when his character, Peter Mallory is sucked back into the Florida Mob that he quit six years earlier. This one is a quick, quirky, tense read.

Zero Cool by John Lange (aka Michael Crichton) is a rip-roaring thriller that finds Dr. Peter Ross, a vacationing American radiologist, on an adventure that will take him from the beaches of Barcelona to the catacombs of the Alhambra.

The last on my Hard Case Crime list is The Wounded and the Slain by David Goodis, about a couple who head off to Jamaica in a last-ditch effort to save their marriage, only to find darkness and murder. This one is the blackest of noir, though, so brace yourself for a nightmarish read.

And finally, I would be remiss in my profile of hard-boiled titles, if I didn’t mention the series by John D. MacDonald featuring his Florida-based salvage man, Travis McGee. If Florida crime is your thing, these novels are not to be missed.

Summer is a wonderful time to catch up on your reading, so hopefully I’ve given you a place to start for all kinds of tastes! What are some of your favorite hot-weather reads? 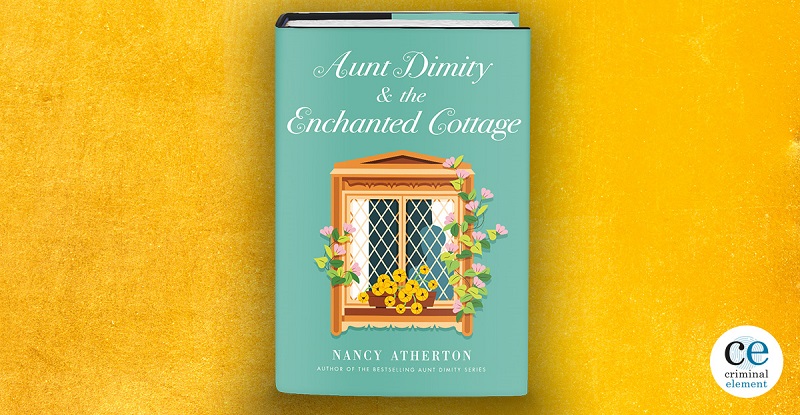 Crispin Windle is the newest resident of Pussywillows, a romantic riverside cottage. Will Pussywillows work its magic on widower Windle? It’s early May and spring is in full bloom. The residents of Finch have an inviolable ritual that dictates how they extend a hand of friendship. They give newcomers three days of grace to settle…