From the writer, producer, and actor best known as "Murr" on the hit television shows Impractical Jokers and The Misery Index, James S. Murray, and co-writer Darren Wearmouth comes The Stowaway, a suspenseful masterpiece that leaves a cruise ship stranded at sea with a serial killer hiding aboard.

Read on for James and Darren's list of their favorite fictional serial killers, and leave a comment on this post to enter for your chance to win 1 of 3 hardcover copies of The Stowaway!

It’s fair to say we’ve both read or watched the best thrillers during the last thirty years. In our opinion, obviously! And there’s one thing we always agree on: what scares us the most is serial killer with clear motives and a detailed plan. A relentless murderer who won’t stop until they’ve realized their grand vision.

The scariest characters are always complex. A contradiction of barely understandable motives mixed with cold-blooded solutions to their problems. Mindless killing on a multiple scale is gruesome but doesn’t chill us to the core. When we created The Stowaway and the terrifying character of Wyatt Butler, we wanted our killer to match the most frightening of the last three decades. Here’s our top five fictional serial killer list:

Everything in John Kramer’s life was good until a series of incidents pushed him in an alternative direction. His wife was pregnant and lost their child. He sunk into depression and his relationship fell apart. The final straw was being diagnosed with terminal cancer after the results had been mixed up. Kramer attempted suicide by driving off a cliff, but he survived. And at that moment, his renewed will to live meant he crawled free of the wreck. From then on, haunted by his past, Kramer decided to test other people’s will to live in terrifyingly designed life or death scenarios.

John Doe was the ultimate pessimist with an obsession with how immoral people were. He considered each of his victims worthy of death because they had breached one of the seven deadly sins. He clearly had a deep insight into human thought and reaction because of how his unnerving plan was executed, and how it eventually played out in the desert. Despite his revulsion with humanity, Doe always remained calm and confident.

Nicknamed ‘The Trinity Killer’, Arthur Mitchell is uniquely different from everyone else on this list.  He was a surburbanite, and on the surface was happily married with two children. Beneath this pleasant veneer, he was mentally scared and abusive. When he was a child, his sister died in front of him after a tragic bathroom accident. His mother took it hard and committed suicide by jumping off a bridge. This left young  Arthur with his alcoholic father, who was eventually found bludgeoned to death in a back alley. Arthur began using the different building program locations to keep this kill cycle going every year, killing a woman in a bathtub, making a mother jump to her death, and bludgeoning a father. He also buried a child alive to symbolize his innocent self. Until he ran into Dexter Morgan…

The investment banker yuppie makes the list for his obsessive nature. He has a rigorous fitness routine, spends a lot of time trying desperately to fit into corporate society, and often slips into long narratives about music. His drive for everything he desires makes him stress over business cards, restaurant bookings, and anyone who appears to be progressing above him. His casual sexual encounters usually end up in death for the prostitutes, and in work circles, Bateman killed anyone who made him feel inferior.

No list would be complete without one of the two killers from this novel and movie. Jame Gumb felt like he’d been born a woman in a man’s body, but was refused sex-change surgery because of his violent past and mental instability. His answer? To capture overweight women, starve them in a basement well, then murder them for their skin to make a suit. His nickname ‘Buffalo Bill’ was crudely given to him by the Kansas City police because of the way he ‘liked to skin his humps’. Gumb inserted a Death’s-head moth into the throat of each victim as he was interested in the insect’s metamorphosis. Just like how he wants to transform into a woman.

Drawing inspiration from all our favorites, our character of Wyatt Butler is a watchmaker, obsessed with the correct and orderly flow of time. He applies the logic, perfection, and precision of a watch to life as a whole. And anyone who interrupts that precision needs to be dealt with, in terrifying ways. We hope The Stowaway becomes one of your favorites as well! 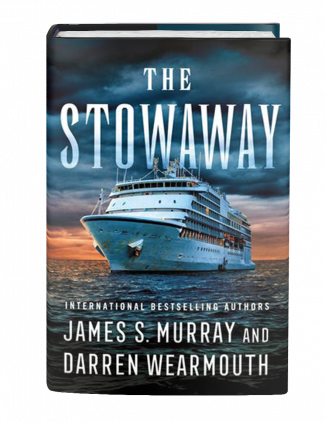 The Stowaway Comment Sweepstakes: NO PURCHASE NECESSARY TO ENTER OR WIN.  A purchase does not improve your chances of winning.  Sweepstakes open to legal residents of 50 United States, D.C., and Canada (excluding Quebec), who are 18 years or older as of the date of entry.  To enter, complete the “Post a Comment” entry at https://www.criminalelement.com/top-five-fictional-serial-killers/ beginning at 9:00 a.m. Eastern Time (ET) September 20, 2021. Sweepstakes ends at 8:59 a.m. ET October 4, 2021. Void outside the United States and Canada and where prohibited by law. Please see full details and official rules here. Sponsor: Macmillan, 120 Broadway, New York, NY 10271.