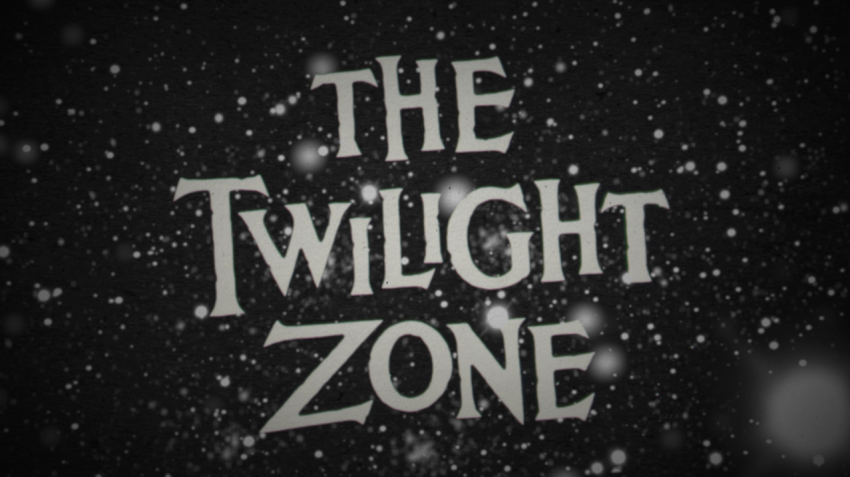 Most who know The Twilight Zone from the groundbreaking TV show’s original 1959-64 run would likely agree that if you had to attach the 156 episodes to one umbrella genre, it would be science fiction. Tales that occur in a “fifth dimension, between science and superstition, into a wondrous land of imagination that lies between the pit of man’s fears and the summit of his knowledge.” Yeah, that’s sci-fi. But a vast variety of topics, themes, and situations were covered over those programs. And there were some especially memorable installments that revolved around crimes/criminals. As a reboot of the show is in its planning stages, let’s look back at eight episodes of creator Rod Serling’s series that can thrill fans of crime TV:

“The Four of Us Are Dying” 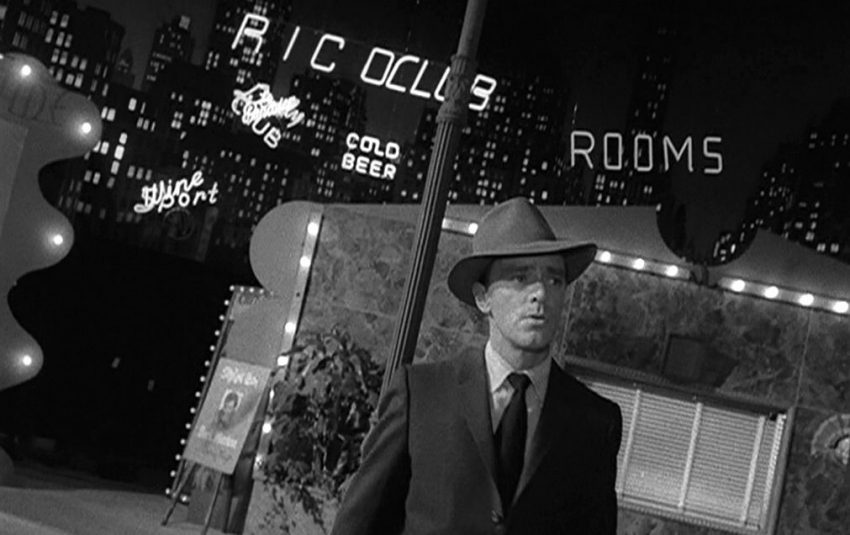 Serling’s taste for the fantastical got blended with elements of a gritty crime story here. Main character Arch Hammer is a guy in his mid-30s, who is described in Serling’s opening monologue as “a cheap man.” Hammer has worked at odd jobs all his adult life and hasn’t amounted to much. But he has one enviable gift: by merely concentrating on another person’s face, he can make his own mug transform to exactly mirror the other’s. It doesn’t matter if the subject is dead or alive.

Hammer has a two-tiered plan to make use of his master-of-disguise trick, one that will bring him both love and money. This being The Twilight Zone, he naturally encounters unforeseen difficulties while executing his ploy.

The crime angle comes into play when Hammer does a ghost trick in impersonating a gangster’s henchman, whom the criminal ringleader had rubbed out after a recent heist. Fans of vintage film noir may recognize lead actor Harry Townes from his role in 1958’s Screaming Mimi and supporting actress Beverly Garland from her part in 1949’s D.O.A. Episode director John Brahm also claims his place in film noir lore for directing The Brasher Doubloon (1947), based on Raymond Chandler’s 1942 novel, The High Window. 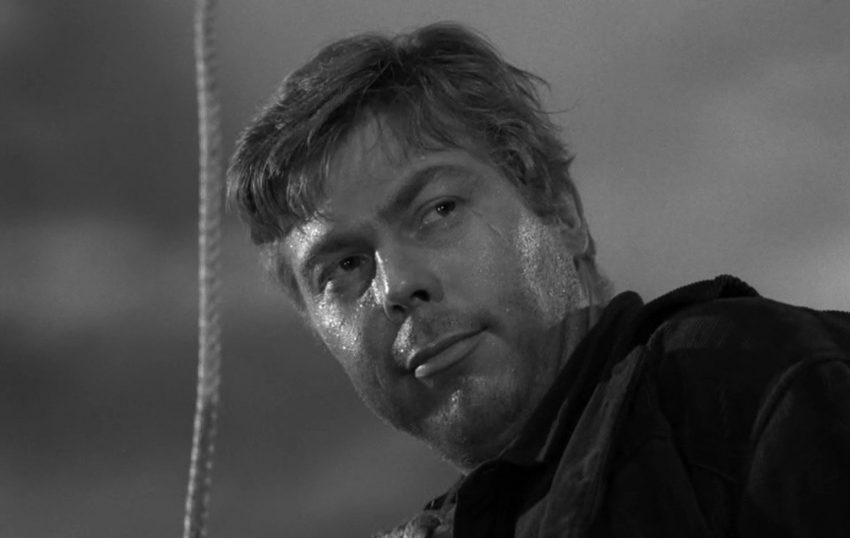 In a time-tripping episode that combines scenes from 1880 Montana and 1960 New York City, the crime at hand is murder. Make that plural: murders.

Joe Caswell is a surly cowboy and an unrepentant mass murderer who’s about to be hanged for his multiple crimes. The time is the late 19th century, and the place is a dusty hanging site in Montana. But just as the noose around his neck is about to bring Caswell to the same fate as his many victims, he is magically transported to the lab of an experimental professor in the Big Apple of 1960.

The scientist—who is played by Russell “The Professor from Gilligan’s Island” Johnson—is conducting a time-travel experiment, and Caswell is his guinea pig. Exactly how the prof brought the unsavory cowpoke forward 80 years is never explained, but who really needs explanations in Twilight Zone episodes? The professor realizes he has invited trouble into the city when he comes to understand the kind of character he has unwittingly rescued. Caswell’s violent nature, combined with the disoriented mental state he comes into when encountered with a world he doesn’t understand, is a toxic mix. Albert Salmi is spot-on in portraying the detestable cowboy, and the big plot twist is pure TZ.

“Nightmare as a Child” 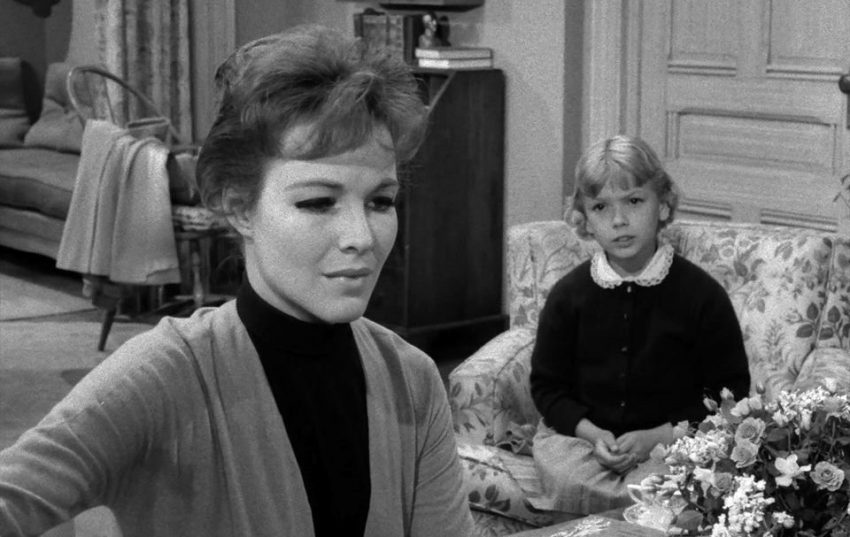 This one doesn’t appear on many Best of The Twilight Zone Episodes lists that have been written up, but it’s a personal favorite for this fan. Janice Rule plays a schoolteacher who comes home from work one November afternoon to find an odd, wise-beyond-her-years little girl waiting for her on her apartment doorstep. The child—who wouldn’t be out of place in a Truman Capote short story—makes it known to the teacher that she knows the woman’s whole life story, although the teacher can’t remember ever having encountered the little girl. Speaking to the woman in a taunting way, the mysterious child seems to want to drive the teacher into remembering disturbing incidents from her past. If the strange little girl’s visit wasn’t an eerie enough experience for the woman, things get even creepier when a sinister man who knew the teacher when she was a child shows up at her door.

To discuss the crime at the core of the story would be to potentially spoil the episode’s surprise element for anyone who hasn’t yet seen it. But suffice it to say that Serling (who wrote this one) took a criminal act and combined it with an exploration into the inexplicable powers of the human imagination to create a terrifying and memorable episode. 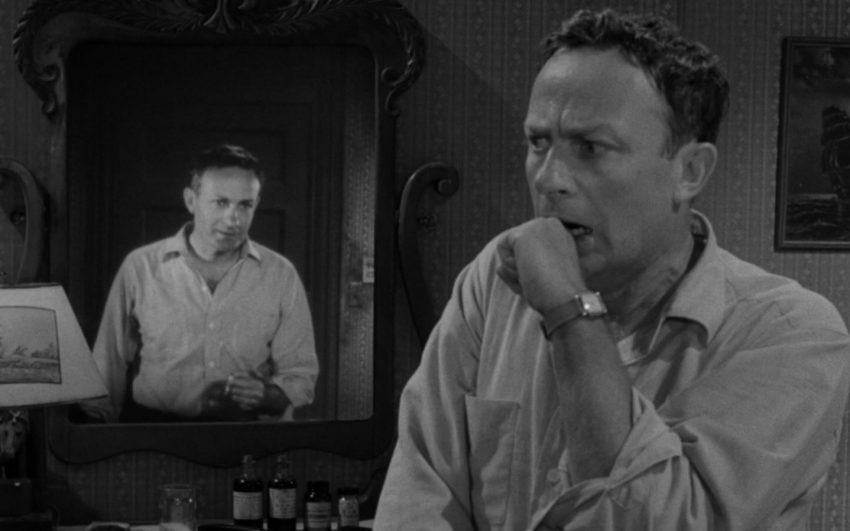 One of the more noir episodes of the show. Written by Serling, the tale concerns a small-time hood named Jackie Rhoades. It’s a sweltering summer evening in the city, and the edgy, fearful Rhoades is sweating it out in a cheap motel room, anxiously awaiting the night’s assignment from his gang boss. And when the slimy syndicate honcho shows up at the room and tells Rhoades what he’s to do that evening, the ever-timid crook becomes fully terrified.

Rhoades, who is used to doing routine jobs like holdups and such, gets told to murder a bar owner who’s been an irritant to the syndicate. As Rhoades wrestles with himself in struggling to raise the courage needed to pull off the kill, the episode goes fully mental. A second, tougher version of Rhoades appears in a mirror and engages the crook in a dialogue that has the feel of a nervous breakdown. Some experimental camera angles add effects to what is an intense, psychotic episode about a criminal driven to the brink of sanity.

“A Most Unusual Camera” 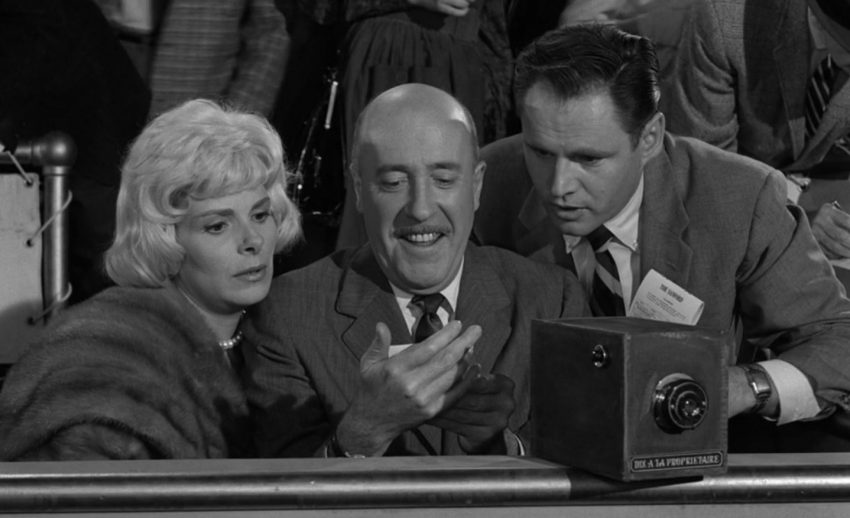 A married couple that doubles as a criminal heist duo is holed up in a hotel room, grumbling with each other about the lousy haul they came away with from a recent curio shop robbery. But then, they stumble across one item among the booty that has a peculiar and promising quality. They got an old camera that seems to take pictures of things that will happen in the very near future, as in minutes from the present moment. After getting spooked by the devilish photo machine, they—along with the woman’s outlaw brother—start to see how they can use it to their financial advantage. Greed sets in, and people who feel like they are forever doomed suddenly have some hope that good fortune may be finally visiting them.

Written by Serling, some of the best parts of this episode come in the grim, jaded observations by the cranky characters. And the woman from the married couple is played by well-traveled character actress Jean Carson, whose singular, froggy vocal tone can either make you giggle or give you the creeps. 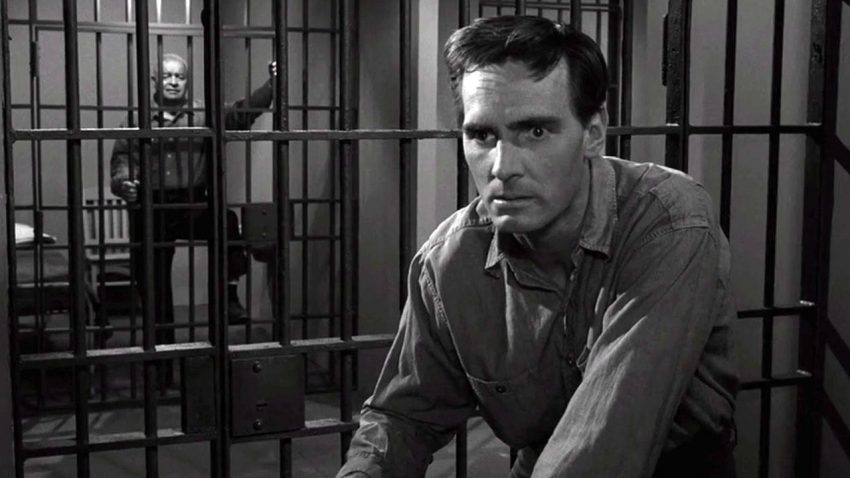 Charles Beaumont (1929-67) was a wildly imaginative writer who was a frequent contributor to The Twilight Zone. For “Shadow Play,” Beaumont adapted one of his own short stories. The mind-bending tale involves a character named Adam Grant (portrayed by Dennis Weaver), who has just been convicted of first-degree murder and sentenced to death by the electric chair. Grant rushes the judge’s bench and makes crazed protestations at hearing his fate.

But this is no ordinary case of a convict insisting he is innocent of a crime for which he’s been found guilty. Grant tells the judge and everyone in the courtroom that if they fry him in the chair, they will be signing their own death warrants because they only exist inside a nightmare he’s having.

So is the guy out to lunch mentally, a desperate man thinking up any wild story he hopes might keep him from being executed? Or should people take his warning seriously? A brilliant episode that can have you looking around yourself, wondering if you and everything you see around you is real or just pieces of somebody’s dream. 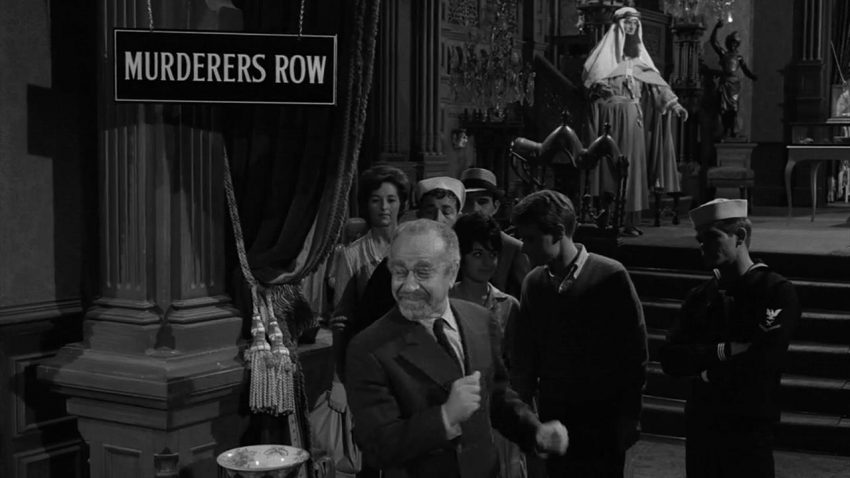 An hour-long episode over the one season during which the shows ran for that extended time span. The writing for this installment is credited to Beaumont, but it was actually ghostwritten by Jerry Sohl while Beaumont dealt with problems caused by a mysterious disease from which he suffered.

Martin Balsam—in an Emmy-worthy performance—plays a curator at a wax doll museum. Balsam’s character, Martin Senescu, is in charge of the Murderers’ Row exhibit at the museum. Senescu, a mild-mannered kind of guy, is dedicated to his work and deeply attached to the wax models he tends and shows off at tours. He cares so much for the figures—despite the fact that they represent Jack the Ripper and other notorious mass murderers of history—that when his employer decides to abandon the business, the caretaker arranges to have the Murderers’ Row dummies brought to his home. And then, bad things start happening when people such as Senescu’s wife and her brother take issue with the wax models and Senescu’s obsession with them. It’s a disturbing episode, and Balsam nails his role as an ordinary man driven to extremes from having become pathologically attached to his work. 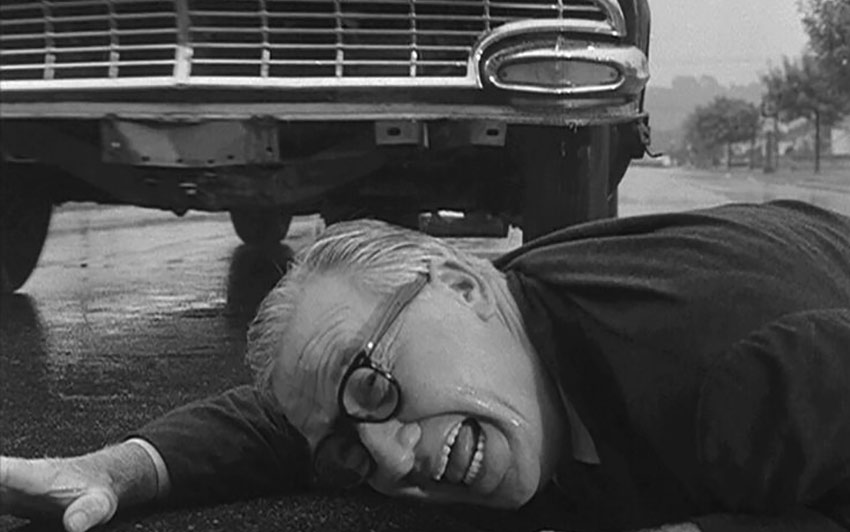 About two decades before Stephen King’s novel Christine was published, The Twilight Zone brought out a story about a car that has supernatural abilities and the power to terrorize human beings. Written by Earl Hamer, Jr. and directed by John Brahm (Brahm also directed “The New Exhibit), the episode centers around a harried businessman who accidentally drives into a bicycle-riding newspaper boy. The driver is named Oliver Pope and is played by Edward Andrews, who will be instantly recognizable to anyone who’s seen him in his innumerable 1960s and ‘70s TV and movie appearances.

Pope decides to flee the scene of the accident and hopes he will never be found out as the perpetrator—especially after he learns that the kid has died as a result of being struck by his vehicle. But Pope’s car won’t let him hide from his hit-and-run crime. The automobile comes to life and harasses Pope, turning itself on at will, honking its horn at all odd hours, forcing Pope to listen to radio newscasts concerning the accident, and even driving itself while chasing Pope! Once again, Serling and his Twilight Zone colleagues used a fantasy story to get at an essential human truth: that we can never really hide from our misdeeds.